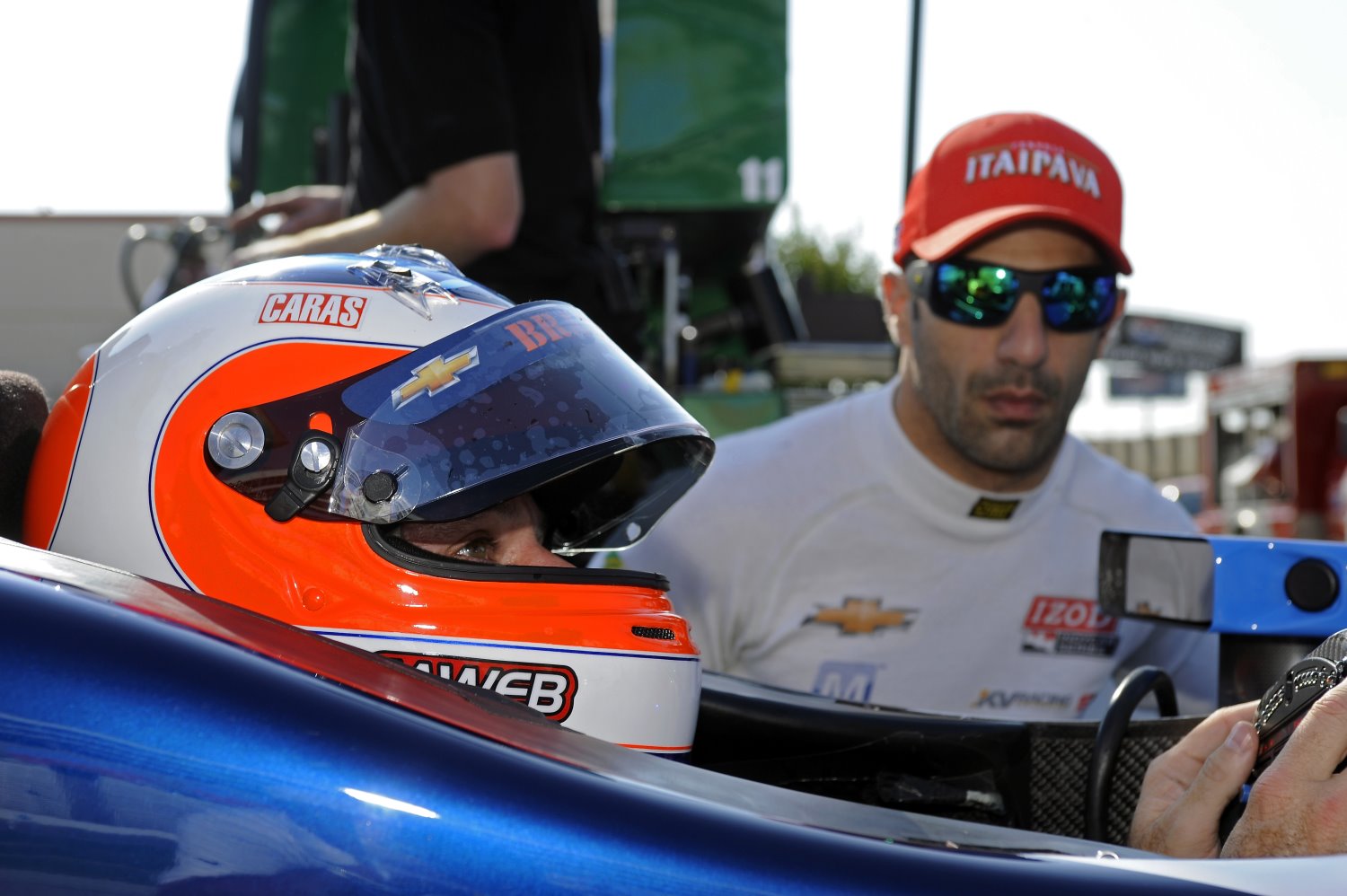 Oval driving 'very different' to F1 – Barrichello
(GMM) Nineteen years of formula one did not prepare Rubens Barrichello for his first taste of driving an IndyCar on a high speed oval.

The former Ferrari driver, who switched categories for the 2012 season after losing his Williams race seat, tested at the Texas Motor Speedway on Monday.

"It was bloody fast," he is quoted by the Associated Press, "and very, very much different than anything I have ever tried.

"I've had places that in formula one that they say 'Oh, it's almost flat and it's a big corner and it's a big challenge'. But the walls were never so close," the 39-year-old Brazilian enthused.

Barrichello's teammate Tony Kanaan admitted it was "fun" and a rare sight to see his close friend "nervous" prior to getting into a racing car.

"It was quite exciting to see how excited he got, and how happy he got out of the car saying how awesome it is," he said.

According to the Sunday Times' annual listings, the seven time world champion's (US) $823 million in career earnings is beaten only by golf legend Tiger Woods.

American Woods has earned $869 million in his own ultra-successful career, the newspaper found.

And the Sunday Times said the pair have each earned hundreds of millions of dollars more than other high-earning sportsmen, including Michael Jordan ($516m), Roger Federer ($316m) and David Beckham ($258m).

F1's two other representatives, Fernando Alonso and Kimi Raikkonen, were way down the top-twenty list, with their respective earnings at about $161 million apiece.

McLaren's world champions Lewis Hamilton ($89m) and Jenson Button ($85m), meanwhile, appear only on the list for British sportsmen, and they are both outpaced by the $129m earned by former Ferrari driver Eddie Irvine mainly through property investment.

However, Hamilton and Button have each earned more in their careers than David Coulthard, Nigel Mansell, former BAR boss David Richards (all $80m) and Sir Jackie Stewart ($67m).

Those earnings, however, are all dwarfed by Bernie Ecclestone's estimated $4 billion, although the 81-year-old F1 chief executive does not appear at all on the list of the world's richest overall.

That list is headed by mega-earners like Sauber sponsor Carlos Slim, who according to the Sunday Times is worth $71 billion.

Red Bull 'happy' with Webber and Vettel – boss
(GMM) Red Bull's team boss has moved to ease speculation Mark Webber could be set to change teams at the end of 2012.

The 35-year-old Australian is now on only a one-year contract, triggering reports he has been lined up by Ferrari as a potential successor to the struggling Felipe Massa.

But subsequent speculation said Red Bull is in fact close to offering to extend Webber's deal.

"I think it's inevitable," he is quoted by France's L'Equipe. "Almost every driver in the paddock is supposed to be joining Fernando Alonso next season.

"We're staying focused on ourselves. Mark is happy to be here, and we are happy to have him with us," said Horner.

"When the time comes later this year, we will sit down and discuss the future with him, as we have done in previous seasons.

"Speculation like this is part of the business," he insisted.

"Mark has driven very well in these first few races, finishing fourth four times. Of course we would like to see him on the podium but he has scored some very important points.

"He can do great things this year. I think with Sebastian (Vettel), they push each other — it's also thanks to him (Webber) that Sebastian gives the very best of himself.

"There is a good dynamic between them and that's exactly what we want," Horner said.

Setup key to pace in new Pirelli era – Brawn
(GMM) Getting the setup right is a challenge teams are grappling with in 2012.

So far this season, four different cars have won the four grands prix, with Pirelli's difficult tires credited or blamed for the unbalance of power.

The key, according to Mercedes team boss Ross Brawn, is car setup.

"We can't modify the setup between qualifying on Saturday and the race on Sunday," he is quoted by Brazil's O Estado de S.Paulo newspaper. "And they are very different challenges, especially with this year's tires.

"It's one thing to get the car to be fast on one lap and quite another to make it fast and consistent over 70.

"Whoever can anticipate what will be required for the race and come to a compromise – maybe to the detriment of grid position – should have a decisive advantage in the race.

"But it's not easy to anticipate what happens on Sunday," insisted Brawn.

Alonso suffered injury at start of 2011
Fernando Alonso has revealed that he was suffering from a particularly painful nerve injury across the opening races of the 2011 Formula 1 season. Later in the year, the Spaniard celebrated just a single victory for Ferrari at Silverstone.

The Champion of 2005 and 2006 described the grievance when answering fan questions on his personal website at the end of last week.

“Sometimes you have muscular injuries, like a micro tear caused in training, tendinitis, a neck strain as a result of fatigue…but it’s just like in any other sport," Alonso explained.

“I think the time I suffered most was at the beginning of last season, when I was suffering from an injury to the sciatic nerve which caused me a lot of pain to the leg towards the end of races.

"I also had a fever in a couple of races: at the end of the race I felt as if I was at the very limit of my strengths."

So far this season, having won surprisingly in Malaysia, Alonso sits joints fourth in the drivers’ standings as crucial Ferrari updates are raced for the first time in Spain.

Mercedes team picks up a new sponsor
The MERCEDES AMG PETRONAS Formula One Team is pleased to announce a new partnership with IWC Schaffhausen, with the Swiss watch manufacturer becoming the Official Engineering Partner of the team from January 2013.

The link between IWC Schaffhausen and AMG, the performance brand of Mercedes-Benz, dates back to 2004, when they reached a partnership agreement. The new relationship with MERCEDES AMG PETRONAS continues this shared passion for pushing the boundaries of precision engineering.

IWC Schaffhausen have been producing luxury watches since 1868, and are renowned for their pursuit of perfection and technical innovation in the design and engineering of their timepieces, a perfect match for the principles of the team.

Ross Brawn, Team Principal of MERCEDES AMG PETRONAS said: "It is widely recognized that motorsport serves as a testing ground for technologies that ultimately benefit us all. As the pinnacle of global motorsport, Formula One is at the forefront of such development, and that leading role is set to continue in the years ahead. It is a privilege to find another company that espouses the same principles as our own, with the same insistence on absolute perfection. We firmly believe that the partnership with IWC Schaffhausen will be enormously beneficial to us both."

Georges Kern, CEO of IWC Schaffhausen commented: "The partnership with MERCEDES AMG PETRONAS will enable us to share our passion for high-level engineering, our quest for ultimate perfection and our aim for top performance with a global audience through the medium of Formula One. This is a win-win situation for everyone involved. Both of our companies attach importance to craftsmanship and innovation, and are driven by a pioneering spirit that underpins all we do. We are looking forward to being part of the MERCEDES AMG PETRONAS team and the sport of Formula One."

Carbonell enters Formula 1 at the hand of HRT Formula 1 Team
Carbonell and HRT Formula 1 Team have signed a collaboration deal through which the leading olive oil brand will have its image present on the drivers’ overalls, whilst also forming a part of the exclusive culinary experience that the team has created alongside Arzak-Bokado.

The squad of Arzak-Bokado chefs travel with the team and have their operational base in the new motorhome hospitality during European races, whereas in overseas races they use the facilities provided by each circuit to maintain the same quality service. They offer a gastronomic experience that meets the different needs of team members and exclusive guests of the team, using fresh national products of the highest quality that characterize the extraordinary and renowned Spanish cuisine, whilst also leaning upon chefs and suppliers at each of the 19 countries visited throughout the season.

Besides the different menus, the gourmet experience also includes gastronomic activities at the circuit such as the "show cooking" or the "lightning pintxo", which HRT offers every Grand Prix Sunday before the race for team members, guests, international press and organizers who travel the globe covering Formula 1 all to enjoy.

The presence of Carbonell, world leader in olive oil, will provide an extra contribution to that gastronomic experience whilst also enjoying an unbeatable platform for the brand because of the quality and worldwide reach of the team’s activities in a setting such as Formula 1. Carbonell has chosen the pinnacle of motorsport and HRT Formula 1 Team, the first and only team in the history of this competition to have its headquarters in Spain, to begin this unique culinary experience in Formula 1 and will also be the team’s exclusive brand for olive oil, olives and vinegar.

The agreement, which was signed by José MarÃ­a Collantes, Managing Director of Deoleo S.A, and Luis Pérez-Sala, Team Principal of HRT Formula 1 Team, at the team’s new headquarters in the Caja Magica in Madrid, is valid until the end of 2012 with an option to extend. With this, Carbonell becomes the first Spanish food brand to be present in the Formula 1 World Championship.

F1's best will prevail in 2012 – Brawn
(GMM) F1's current unbalance of power will eventually settle, leaving the best teams at the front of the pack.

That is the view of Ross Brawn, despite Pirelli chief Paul Hembery predicting that Barcelona could crown a fifth different winning team and driver this weekend.

But Mercedes chief Brawn thinks the thrills and spills will ultimate settle.

"In the end, the best will prevail," he is quoted by Germany's Auto Motor und Sport, "because they will get it right with the tires more often.

"It may take a little more time, but I think ultimately the good teams and the good drivers always do the better job," added Brawn.

The situation so far in 2012 has seen Mercedes and Nico Rosberg break through with pole and victory in China, but Briton Brawn is not sure he would describe the season as "thrilling".

"Perhaps (it is) for the spectators," he smiled, "for the teams it's just more difficult.

"The first four races were marked by inconsistency for all the teams. We are still getting experience with our cars, but especially how they work with the new tires.

"Obviously for the sport, it's great."

And Brawn is confident Mercedes can keep up with the development speed of the best teams, including McLaren, Red Bull and Ferrari.

"Yes. We have brought in Bob Bell, Aldo Costa and Geoff Willis, which is paying off now, as are some other strategic changes.

"I do not think we are inferior to our competitors in any way," he insisted.