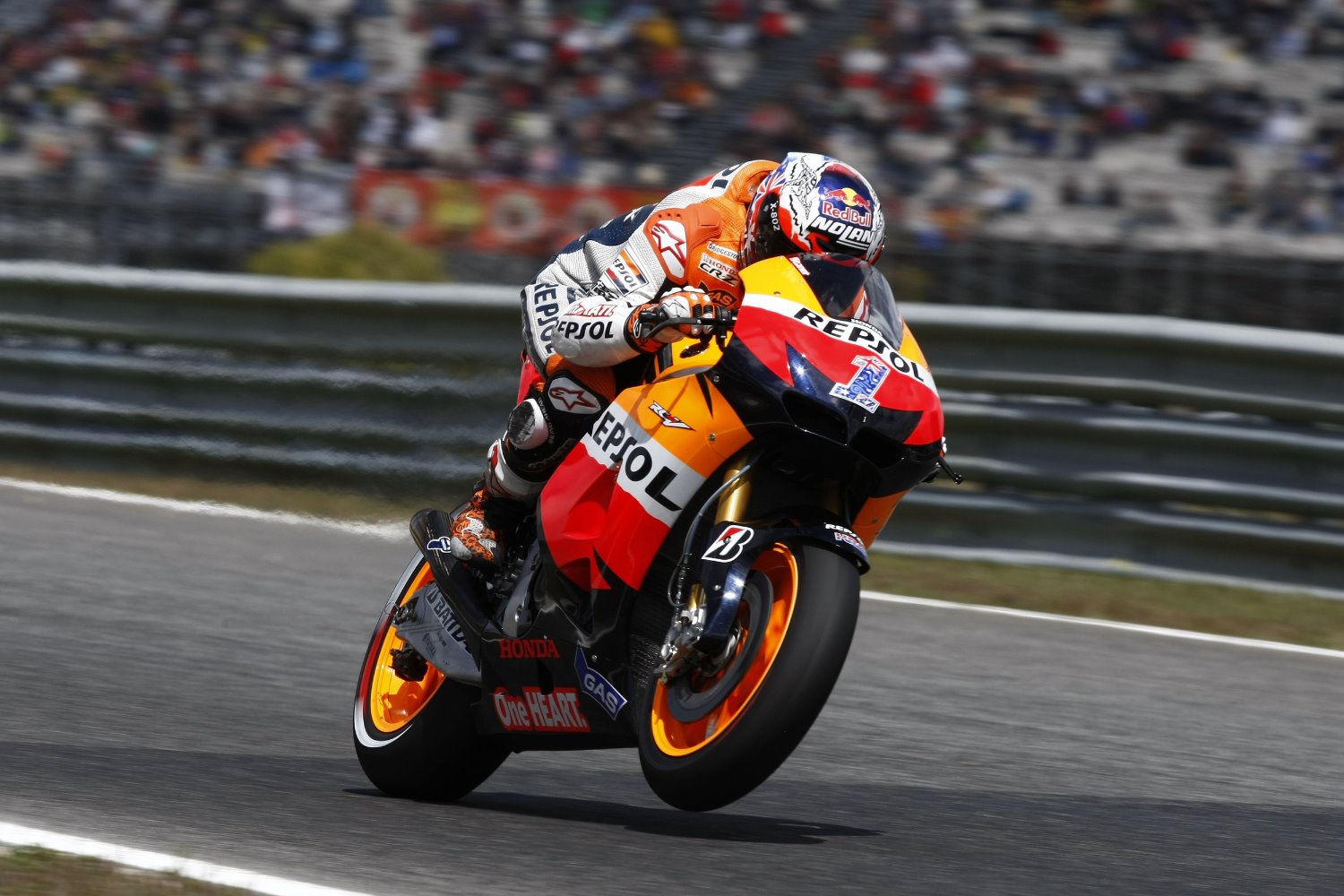 Casey Stoner took his first pole position of the season with Dani Pedrosa in second just 0.013 off his team mate in a dramatic qualifying practice session at the Estoril circuit.

Both Repsol Honda riders sealed their front row spots for the Grand Prix of Portugal in the dying minutes of the session, which was interrupted by a red flag with eleven minutes remaining due to a crash involving De Puniet and Edwards.

The Repsol Honda Team is prepared for a big battle tomorrow with Casey looking for his first victory at this track in the premier class. Dani will be hoping to repeat the win he achieved here last year and also take his 100th career podium.

Today’s qualifying session for the Grand Prix of Portugal proved to be a frustrating one for both Yamaha Factory riders. Jorge Lorenzo led for most of the session until a red flag incident between Colin Edwards and Randy De Puniet forced a restart with nine minutes remaining. A mixture of heavy traffic along with a lack of confidence in certain corners resulted in a gradual drop to a grid position of fourth on the second row, just 0.278 seconds from pole. This will be the first time since 2008 that Lorenzo has not started from the front row of the grid at Estoril.

"In general it's been a good day for us and I'm really happy to get pole. FP3 was positive and we made progress on the bike, we had the bike turning well with good front feeling. Unfortunately in qualifying we tried to improve it further but managed to lose the good points! We did find a little better feeling in the rear but we couldn't get the bike to turn and do what we wanted it to. We didn't really feel we had the pace to be on pole today, but after the red flag came out with 10 minutes remaining we were able to get out there and put together a good enough lap to take pole. We've been pretty fast in every session and our race pace gives us confidence but we'll have to have a think about which set up direction we go for in warm up and hope this is the best for the race. I was sorry to see Colin has broken his collar bone again and I send him by best wishes"

"I think we did a good job in qualifying and to be on the front row here after all the issues we had is a great thing. I couldn't put too many good laps together because I had some problems on the bike, first with the brakes, then with the electronics and by the end I was feeling good but we had to stop again due to the red flag. I honestly think that in the last minutes of the session I could have taken the pole but there was a lot of traffic and I missed it by just 0.013. The race will be very tough tomorrow because the track conditions are poor, the grip is low and it makes the tires spin a lot. We will try to set up our bike a little better for tomorrow to do our best in the race".