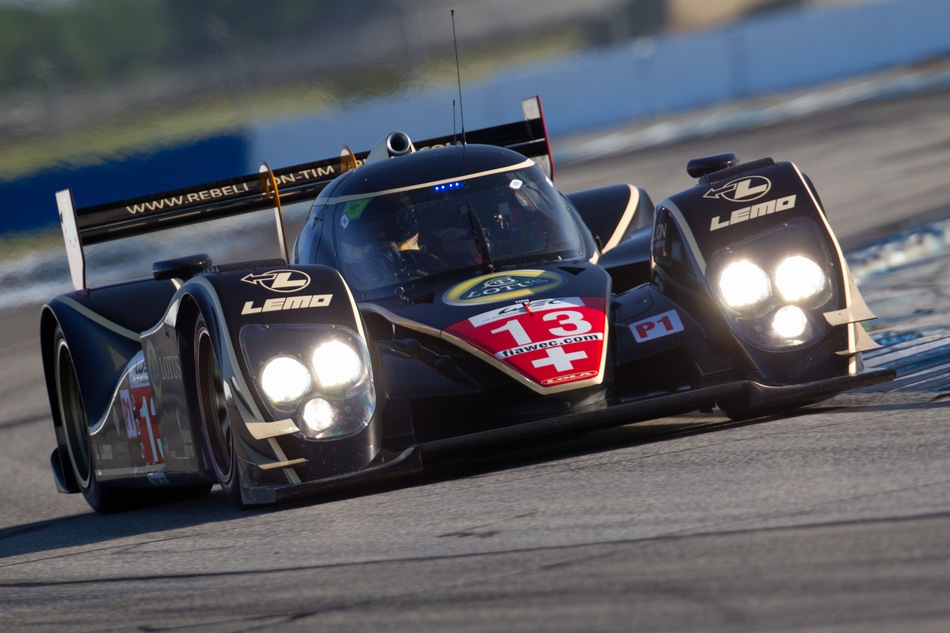 Seven Lola designed and built LMP cars head to the glorious Spa-Francorchamps circuit in Belgium this weekend, looking to continue the fine start to the inaugural FIA World Endurance Championship.

Rebellion Racing will undertake the European debut of the 2012 look Lola B12/60 LMP1 at Spa this weekend. The brace of Toyota V8 powered Lolas will come after a very promising test at Valencia two weeks ago. Details of the new-look LMP1 can found below.

Looking forward to the first European round of the 2012 FIA World Endurance Championship, Lola Executive Chairman, Martin Birrane said: "Spa is a very big race for Lola this weekend. As the most represented constructor on the LMP grid we are in a great position for some very strong results. The factory has worked incredibly hard on the 2012 development upgrades and there is a palpable sense of excitement and confidence going into the weekend."

Five Lola LMP2 cars will be racing for class honors at the second round of the FIA World Endurance Championship this weekend. The Status Lola-Judd that finished 3rd at the ELMS opener at Le Castellet last month will join two Lolas each for the Gulf Racing and Lotus LMP2 outfits.

Status GP enjoyed a sensational start to their sports car program by qualifying on the front row, leading the race for the first hour and finishing on the podium in the black and green Lola-Judd. Two of the stars of that weekend were rapid British racer, Alexander Sims and Dutch ace Yelmar Buurman. They will be joined this weekend by Romain Iannetta, who has previous experience of LMP as he raced in a Courage and Creation in the 2007 and 2009 Le Mans 24 Hours respectively.

Gulf Racing and Lotus LMP2 will both be hoping to get their 2012 points accounts opened at Spa with their two car Lola operations. Gulf Racing remain unchanged from their Sebring line-up of Fabien Giroix, Frederic Fatien, Keiko Ihara , Stefan Johansson, Jean-Denis Deletraz and Maxime Jousse for the 6 hour endurance test around the Ardennes. Lotus meanwhile have added a second Lola B12/80 and employed former F3 hotshoes James Rossiter and Renger Van Der Zande to partner Swiss domiciled American Kevin Weeda.

The Spa 6 Hours will take place from 14.30 until 20.30 on Saturday 5th May. For full coverage of all seven Lola entries throughout the meeting simply log on to www.twitter.com/LolaRacer

1. What have Lola been concentrating on with regards to the B12/60 LMP1 car?
The Lola design and engineering team have been looking at overall efficiency improvements to the aerodynamic surfaces of both the LMP1 and LMP2 Lola designs. The initial CFD and wind tunnel studies took place last autumn in Lola’s on-site 50% scale facility in Huntingdon, UK.

Visually the cars will look very different, particularly the front bodywork which is 100% new. The front splitter, diffuser and light cluster have benefitted from an intensive CFD and wind tunnel development and Lola have implemented additional aerodynamic elements to the front section to improve the downforce levels of the design.

Different composite solutions have been used by Lola in order to reduce the weight on some aspects of the bodywork of the car Lola composites and FEA engineers have been working hard on new solutions to optimize these new concepts and to ensure that we have more scope in terms of transferring weight in the overall package.

What impact have the new regulations had on the developments?
The main changes for both LMP1 and LMP2 classes were the implementation of larger fins on the rear bodywork and holes in the wheel arches. These were both safety orientated changes to further reduce the likelihood of the cars overturning when they spin. The fins’ height and length are set so the main challenge for the designers was to see what the best solution is for incorporating the airbox at the top of the chassis. Lola found an efficient and unique solution to minimize drag at the top of the chassis using its advanced CFD capability.

What new technology will there be on the Lola LMP car?
For the last few years Lola have had a permanent 'cell' of engineers working on future technologies including advanced composites, alternative fuelled/powered cars and new aerodynamic solutions. Lola have partnered with the likes of Multimatic, BAE Systems and Cosworth on the recently unveiled all-electric LMP car, which is scheduled to run shortly. The Lola design team will continue to evaluate most of these innovations with an eye on incorporating them in to future LMP models, should the regulation allow. Lola have also completed work on a 'flywheel KERS' installation. This option is available to customers.