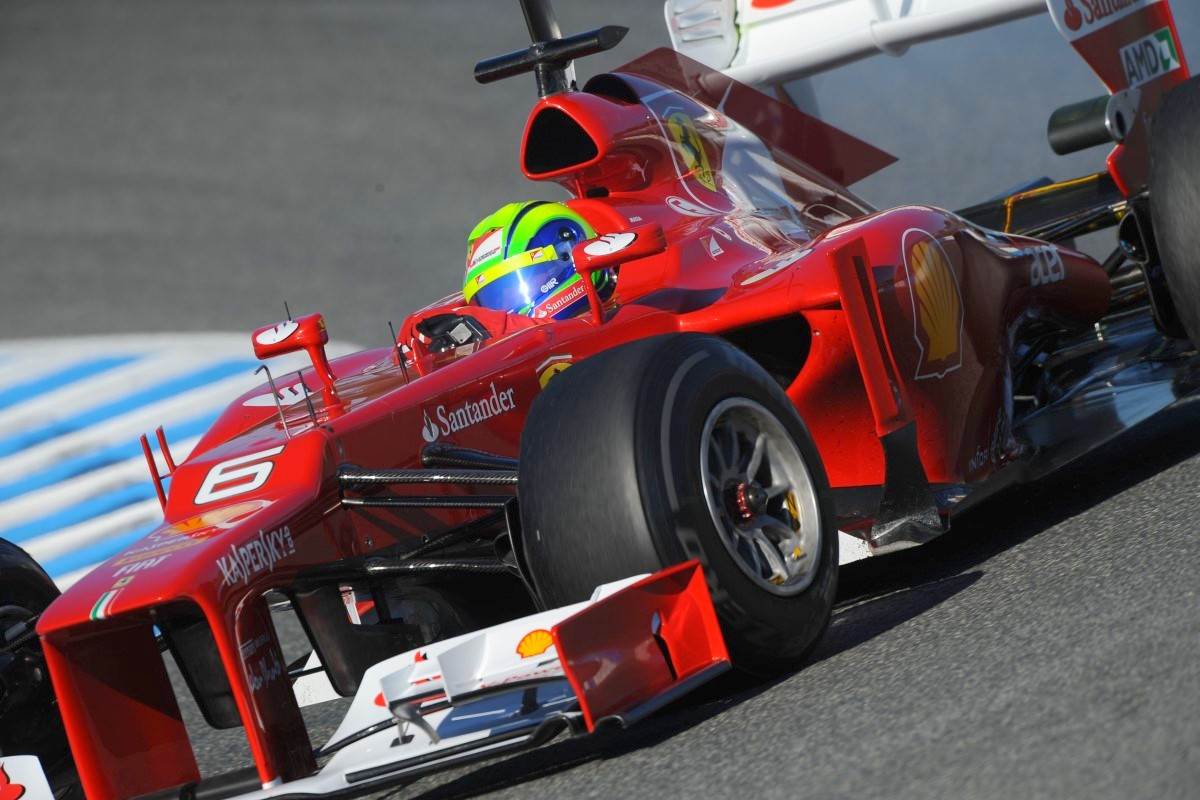 'B' Ferrari not ready yet – reports
(GMM) Ferrari will not run all of its planned car improvements at the Mugello test this week.

"My information is that the new single seater is not ready," reported Livio Oricchio, the correspondent for O Estado de S.Paulo newspaper.

There has been speculation that, following Ferrari's troubled start to the new championship with its F2012 car, the changes for the forthcoming Barcelona race will be so sweeping that it might be called a "B" version.

But technical director Pat Fry reportedly told Oricchio that Ferrari designers are "staying with the (current) front suspension"; a reference to the Maranello based team's innovative use of pullrod technology this year.

And the well-informed journalist Dimitris Papadopoulos adds that, even though the Mugello-spec Ferrari will have a new nose, sidepods and wings, "there will be no new chassis".

Grosjean told 'Kimi faster than you'
(GMM) Romain Grosjean was given a familiar instruction by his team during the recent Bahrain grand prix.

The Finnish broadcaster MTV3 reports that the Frenchman was told that his teammate "Kimi (Raikkonen) is faster than you".

"Do not hold him up," the radio message reportedly ended.

In 2010, when team orders were still illegal, Felipe Massa was famously told "Fernando (Alonso) is faster than you" shortly before the Brazilian gave up the lead of the race to Alonso.

"We don't want to play team orders," Lotus team principal Eric Boullier insisted in Bahrain, "so we let them race normally and what happened, happened."

Panis, the 1996 Monaco grand prix winner and veteran of over 150 formula one races, now manages the career of 22-year-old Pic on behalf of the Lagardere group.

"I had the chance to talk with Ron Dennis on the grid," the former Toyota racer and McLaren test driver Panis told RMC, "as he had come to see him (Pic).

"It shows that nobody is indifferent to what he is doing so far."

Panis, 45, revealed that Pic is also spending "a lot of time" in McLaren's driver simulator, thanks to the technical agreement between Marussia and McLaren.

"He is building an image slowly, which is positive. He has earned the respect of the paddock, and now we have to continue," Panis added.

Brother Ralf says own F1 career 'over'
(GMM) Ralf Schumacher has ruled out following his older brother Michael back into formula one.

At the weekend, 36-year-old Ralf kicked off his fifth consecutive season driving a Mercedes in the German touring car series DTM.

He was a respected winner of 6 grands prix, driving most recently for Toyota in 2007, but despite his famous brother's return to F1 with Mercedes, Ralf told Germany's Der Westen that his own grand prix career "is over".

"Formula one is exciting and beautiful, but the DTM is much more friendly, we don't have to travel all around the world, everything is familiar.

Schumacher attacked the Italian marque's 2012 product after the Bahrain grand prix, complaining that the tires wear so fast that drivers often have to take corners at half-pace like the safety car.

"In some ways he's right," Brazilian di Grassi, who along with Jaime Alguersuari tests tires for Pirelli, is quoted by Globo.

"You can't go at 100 per cent all the time because the current tires are designed to highlight the strategy during the races.

"Drivers have to think more about what part of the race to make best use of the tires," said the former Virgin driver.

Di Grassi, 27, credited Pirelli for the exciting races seen so far in 2012.

"The championship is very balanced, which is good for everyone, especially the public," he said.

"It's partly because Pirelli has been able to use the data it collected last year and make good decisions for this year," added di Grassi.

Also with a view contrary to Schumacher's is the seven time world champion's own teammate, Nico Rosberg.

"F1 has become more interesting," said the Shanghai winner, "as everything has been shaken up — it's much better than the same cars and drivers always driving away from the front," he is quoted by German media.

"Due to the tire situation, the races have been very varied, which is an extraordinary challenge but also very exciting. And we have to get used to it," added Rosberg.

Sponsorship 'only problem' for di Grassi
(GMM) Lucas di Grassi has admitted that even his continuing role at Pirelli is not a ticket back onto the F1 grid.

"I'm in the best possible position technically, as the driver with knowledge of the tires – almost choosing them for next season – it puts me in a very comfortable position.

"Of course I want to race again with a team and I'm working on it," said the 2010 Virgin driver, who was replaced by the now Marussia team with Jerome d'Ambrosio at the end of his only season in F1.

"The only problem is the lack of sponsorship," di Grassi is quoted by Globo. "Let's hope some Brazilian companies want to come in to support."

"Drivers are paying as much as $10 million to be a reserve at some teams," the British commentator told the Daily Mail.

"Nine men who raced in F1 last year don't have a drive any more. As soon as the money runs out, they're replaced by someone who does have money."

F1 a job, 'not my life' – Raikkonen
(GMM) Kimi Raikkonen insists he is "not interested" in formula one — except the cars, and winning.

Asked by the reporter for Bild am Sonntag newspaper if the famous Finnish character might remove his sunglasses for an interview, 2007 world champion Raikkonen replied simply: "No."

At the end of his fourth race since returning to F1 from rallying, the 32-year-old was back on the podium in Bahrain.

"It's not going too bad," he said. "I like what I'm doing, that's enough. I don't care if someone says whether I'm doing it well or not.

"Still, it's disappointing when you're only second. Who knows what's going to happen at the next race," the Lotus driver added.

Just after leaving F1 at the end of 2009, Raikkonen said he disliked everything about the sport — except the cars.

"No. I'm only here for racing," said Raikkonen.

"All the other bulls**t I can do without. If you took away the cars from formula one, I would not be there.

"Formula one plays no role in my personal life. I have a real life! I think for many people, their life is formula one. For me it's not."

Nico Rosberg will be first in the car on Tuesday morning before Michael Schumacher takes over in the afternoon. Schumacher will then remain in the car for all of Wednesday's running before Rosberg concludes the test on Thursday.

The Mercedes line-up ensures a 50:50 split in terms of potential track time between the two drivers, with only Toro Rosso and Marussia having gone down a similar route. McLaren is the only team that is not running any of its race drivers during the week – with Jenson Button now scheduled to take part in a promotional event in Budapest on Tuesday – while Red Bull remains the sole team yet to announce its driver schedule.

Mugello will be the first in-season test since 2008, but HRT will not be present as it focuses on a move to its new headquarters in Madrid.