Patrick Long, of Belleaire, Fla., checked out for the Pirelli World Challenge GT win at the Privacy Star Grand Prix Presented by Bondurant, but the real fireworks came in a GTS finish that allowed Andy Lee, of Colorado Springs, Colo., to take his first series win.

Lee’s No. 20 Best IT Chevrolet Camaro entered the last lap in fourth place in the GTS class, trailing Kinetic Racing teammates Michael Galati and Colin Braun in the Nos. 36 and 38 Infinity Audio/Kia Motors USA Kia Optimas and Peter Cunningham’s No. 42 Acura/RealTime Racing Acura TSX. Braun closed the gap to Galati, and the two were battling for the lead on the last corner of the 3.048-mile Outer Course configuration when the cars hit, sending both off course, collecting Cunningham, and letting Lee race to the win. The crash was named the Kia Turning Point of the Race. 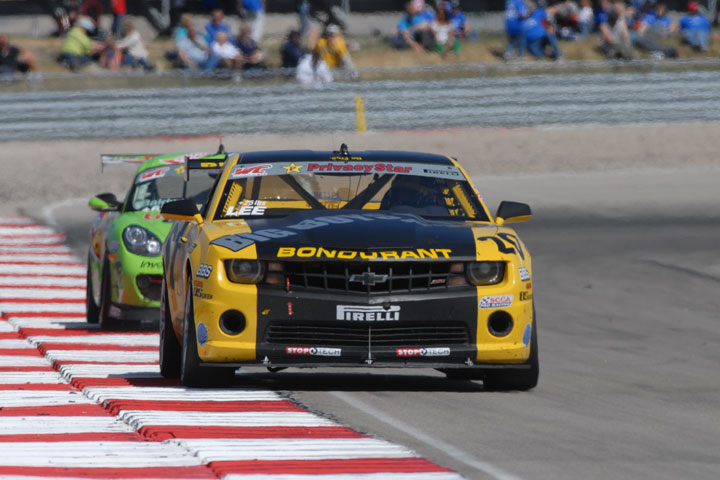 “I still can’t believe it actually happened," Lee said. “You don’t want to win a race like that with people crashing so I ‘m glad everyone is ok, but if you get it handed to you then you might as well take it. We need the points, we had a horrible race at Long Beach, and this is just icing on the cake to be here. It’s awesome."

Galati took the lead officially with the Invisible Glass Clean Pass of the Race on the sixth of the 22 laps the GTS machines would complete, battling but holding the lead over Cunningham and Jack Baldwin’s No. 68 Hot Wheels/Invoice Prep Porsche Cayman through the 21st lap until the incident.

After the race, neither driver was sure what happened – only that Braun recovered for a second-place finish and Galati crossed the stripe third for Kia’s best finish in the four-race Pirelli World Challenge season.

“My whole plan the whole race was to try and save my tires, so I was kind of sitting back there trying to keep within arms reach of the leaders," Braun said of the race. “Michael did a great job all day and had a lot of pace. I felt like my strength was going to be sitting there being patient and make a run for it at the end. We kind of followed right along with what we were trying to do and had a lot of fun racing Michael there at the end.

“He got a little bit wide through one of the last corners and I got a really good run down the straightaway and made an attempt to try and pass him. We ran side by side through a few corners and then I’m not really sure what happened, we just got together and that was that. It would have been one of those things where, if not for a bunch of gravel and stuff that Michael ran through and got real wide the corner before it was never going to be a race. I thought we’d have a really good race side by side for the win and just missed it a little bit. It doesn’t take much of a touch and hooked the doors and that was that."

“In traffic, we started getting lapped and I had a little gap and I lost it," Galati said. “Then at the end, I don’t know. We were side by side the lap before with my teammate, it was a great show. And then the last lap, last corner I turned in and all of a sudden – I spun around, and that’s how it is, that’s racing.

“Thanks to the Kia Optima, thanks to Kinetic, all my crew guys did a fantastic job. There’s more to come."

Baldwin finished fourth, with Cunningham’s teammate Nick Esayian fifth in the No. 34 Acura/RealTime Racing Acura TSX. Cunningham’s car had stopped on track with heavy damage and was scored in eighth.

Long’s overall and GT win came as a substitute for Lawson Aschenbach, who missed the weekend with a prior commitment. The defending GT Champion ran side-by-side with O’Connell’s No. 3 Cadillac Racing Cadillac CTS-V on a number of occasions while the two raced ahead of the field. Long officially led lap seven as the pair crossed the finish line virtually side-by-side, and once he took the lead for good on lap 10 with the Cadillac CTS-V move of the race, it was smooth sailing to the checkered flag. 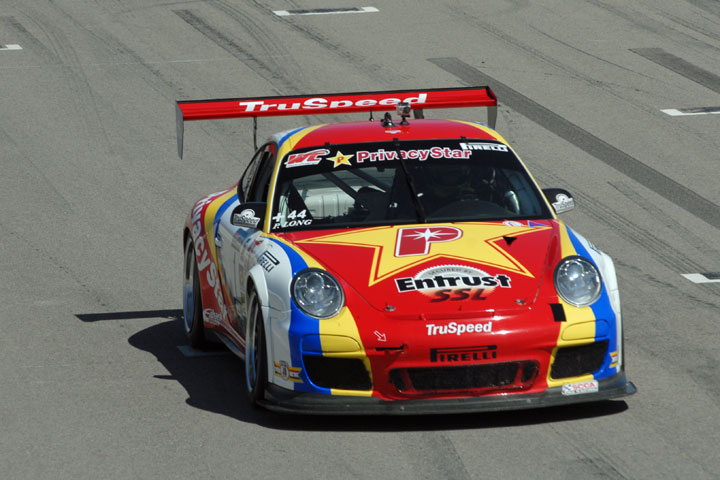 “I dropped the clutch at the start and the thing hooked up so well I had to dip the clutch again and that gave everybody a jump," Long, the polesitter, said. “But I learned from last year that you can’t give up on the starts even if you get beat off the line so I went hucking down into one and laid it on the ABS and got a couple of those spots back.

“After that, Johnny was really quick the first couple of laps and I just tried to keep him honest, find out where his strengths and weaknesses were, and really just use him up. Today, we were just so evenly matched on speed but it came down to consistency and with TruSpeed and [Long’s engineer] Steve Trindade, that thing was so hooked up. You can’t sit there and count your chickens because the Pratt and Miller guys are going to be there every single weekend. For a small team out of Southern California, it’s pretty awesome to beat the Detroit iron."

O’Connell’s runner-up was his fourth podium finish in as many races this season. In Pirelli World Challenge, strong finishes are giving REWARDS weight to equalize the competition – an honor that has been bestowed on the No. 3 Cadillac this season.

“It was a really good race with Patrick," O’Connell said. “With us carrying all the weight, I figured out pretty early that he was just going to try to wear me down, make me use up my tires and then have his way with me. I actually backed my pace off a little to let him get close. I figured eventually he would take a run at me going into Turn 1. We raced each other super clean, and I think the fans enjoyed that. I was just hoping for traffic that never came. You have to give it to them. They were a little bit stronger today, but shoot, with 144 pounds…we were carrying a lot of weight.

“For me it was very difficult, watching my tires and saving some for the end. Right now, I am driving as strong if not stronger than I ever have in my career. It was really hard for me to sit back and manage everything, but I was very proud that I was able to do that."

Mike Skeen started from the rear of the field in the No. 02 Hawk Performance Chevrolet Corvette after the team struggled with mechanical issues in practice and qualifying this weekend. By lap five, Skeen was in fifth, and with two laps to go had moved past the No. 8 Cadillac Racing Cadillac CTS-V of Andy Pilgrim to claim the final podium position. That effort earned Skeen the Sunoco Hard Charger, and his positions improved on the opening lap were also good for the Optima Batteries Best Standing Start.

David Welch had his best career Pirelli World Challenge finish behind the wheel of the No. 77 Go Pro/StopTech/Eibach Ferrari F430, finishing fifth.

O’Connell extends his GT Drivers’ Championship lead with the runner-up finish, holding a 501 to 452 point lead over teammate Pilgrim. James Sofronas (354 points) moved to third with an eighth-place finish, while Aschenbach fell to fourth with 342 points. Randy Pobst, who finished sixth, is fifth with 333 points. Cadillac leads the Manufacturers’ Championship holding a slim 32-30 lead over Porsche. Volvo is third with 14, followed by Corvette at 7.

Some on-track incidents are still under investigation. Any penalties that may be assessed will be announced in a later release.

The GT and GTS classes return to action in two weekends at Mazda Raceway Laguna Seca. The Touring Car and Touring Car-B classes will complete a tripleheader weekend with a 40-minute race on Sunday at 11:25 a.m. MDT.