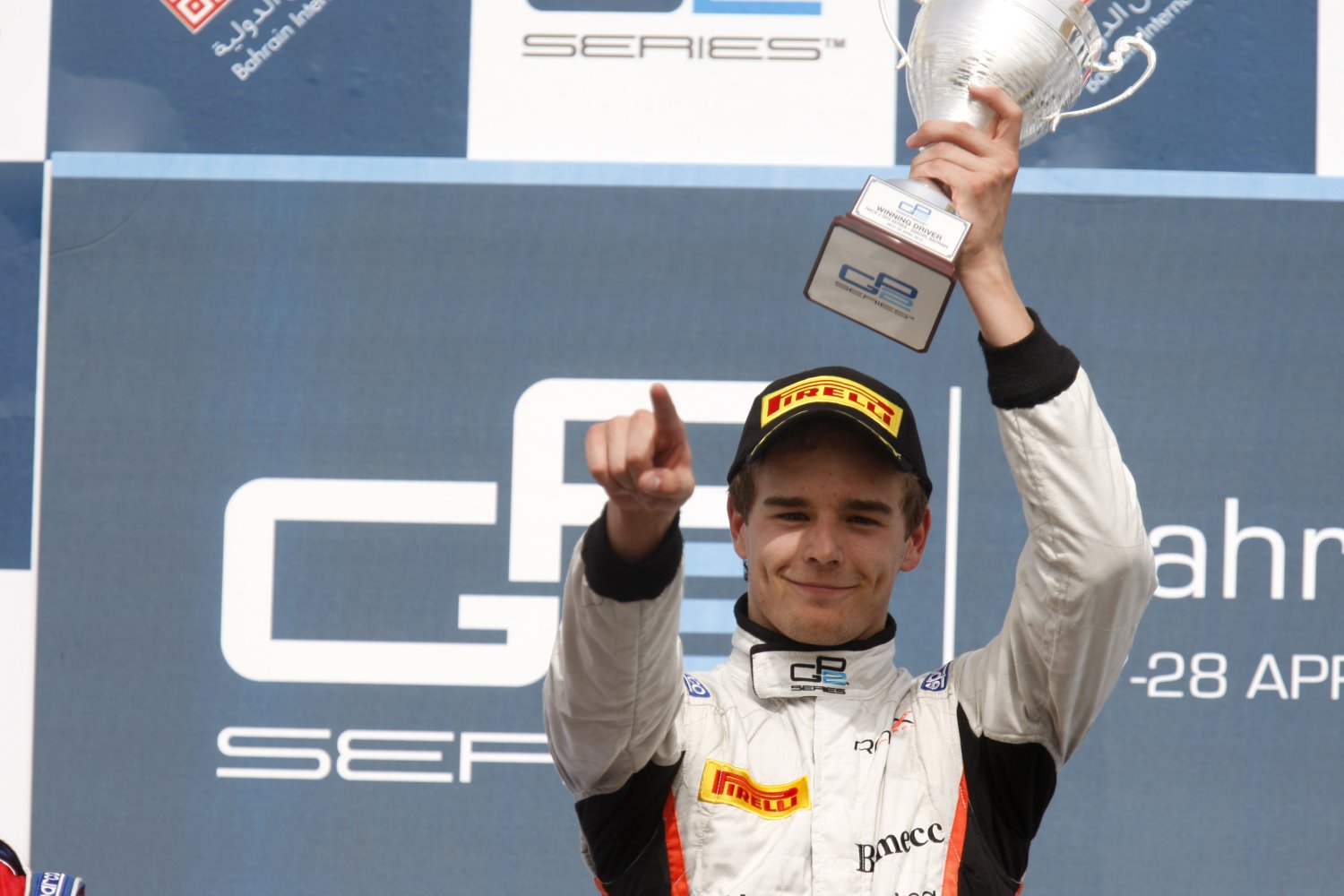 Victory never tasted so good for Tom Dillmann: the French rookie took a lights-to-flags win in today’s Sprint Race after having to hold off a charging Luiz Razia in the final laps. He took the checkered flag 0.1s ahead of the Arden man and thus pocketed his first ever GP2 win.

When the lights went off, polesitter Dillmann had to defend his position at Turn 1 to keep the lead ahead of Marcus Ericsson. Further down the pack, Esteban Gutierrez and Felipe Nasr took a blazing start. The Mexican entered Turn 1 from the inside slightly came together with Giedo van der Garde. The Dutchman spun but was able to rejoin safely. By then, Razia had made his way to P3 from fifth on the grid.

At the front, Dillmann started to pull away from Ericsson who was himself busy with trying to keep Razia at bay, but the Brazilian prove to be too strong a rival for the Swede today and overtook him to take P2. A lap later, the iSport man’s race went from bad to worse when Rio Haryanto passed him for P3. Series leader Davide Valsecchi was next on the list of Ericsson’s torturers, but their battle was interrupted when Gutierrez attacked Valsecchi and passed him at Turn 1.

Dillmann was 4.2s ahead of Razia by then. Gutierrez continued to slice through the field when he overtook Ericsson and then targeted Haryanto. The Indonesian defended well his position but had to surrender a lap later. Behind this pair, Valsecchi passed Ericsson who later was also overtaken by Nasr. Haryanto could not resist for too long when Valsecchi started to put pressure on him. The Italian closed in on Gutierrez for P3 and he was soon close enough to make a move on the Mexican. If the first two attempts did not work, the third one stuck and Valsecchi was back on the podium.

Meanwhile, the race leader had managed to build up a gap of 5.5s to Razia, but the Brazilian started to pick up the pace and what was a comfortable cushion between the two men slowly but surely disappeared. Dillmann lost four seconds over two laps and with three laps to go, Razia had reduced the gap to 0.9s. The Arden man started to try and find a way past the Rapax rookie who defended his position the best he could although he seemed to be struggling on his tires. Razia came even closer and attacked the Frenchman from all parts, but he made a small mistake on a curb which gave Dillmann a tiny room to breathe. On the final lap, Razia was back in Dillmann’s mirrors and pushed hard to find a way past, but the Frenchman made no mistakes and crossed the finish line with the smallest of margins.

Behind the leading duo, Valsecchi took another podium finish in third ahead of Gutierrez. In the final corners, Nasr took P5 from Haryanto. Ericsson and Fabio Leimer pocketed the final points. Valsecchi is now more than ever the clear leader of the Series with 107 points after a fabulous Bahraini campaign, 24 points in front of Razia. Gutierrez is third with 54 points, nine points ahead of Max Chilton. Leimer lies in fifth place with 41 points.

The fourth round of the 2012 GP2 Series season will take place in Barcelona, Spain in two weeks alongside the Formula One Grand Prix.