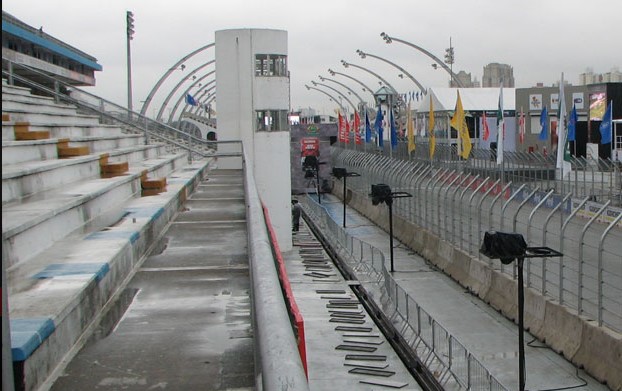 04/27/12 Just got into Brazil this morning. Raining steadily with low cloud cover. Seemed like we couldn't see the ground in the plane until we were from about 500 feet altitude.

Was a bit surprised to see Tagliani here. Evidently the team is not here but both Bryan Herta and Tag are here to fulfill some sponsors commitments. Tag was very upbeat and really glad that he'll have a competitive engine for Indy. "The good news is, I'm going to have a shot at the pole again," he said.

Mike Shank announced his Indy 500 entry. Jay Howard will be the driver. But the question now is who will supply an engine. And INDY CAR is trying to help, but the timing isn't great. Lotus just loss Dreyer & Reinbold and Bryan Herta. So maybe they will have an available engine or two for Shank.

No running today, Friday. A few 2-seater rides are being conducted. But the rain is expected here all weekend from what we've been told. They keep holding this race the same time each year, and each year it rains. As Albert Einstein said, "The definition of insanity is doing the same thing over and over and expecting different results."

The rain may prevent the opportunity to see if the turbocharger change allowed by Honda will make a significant difference. Those Lotus drivers will be sitting ducks on the long backstretch that is about a mile long of the 2.6-mile temporary street circuit.