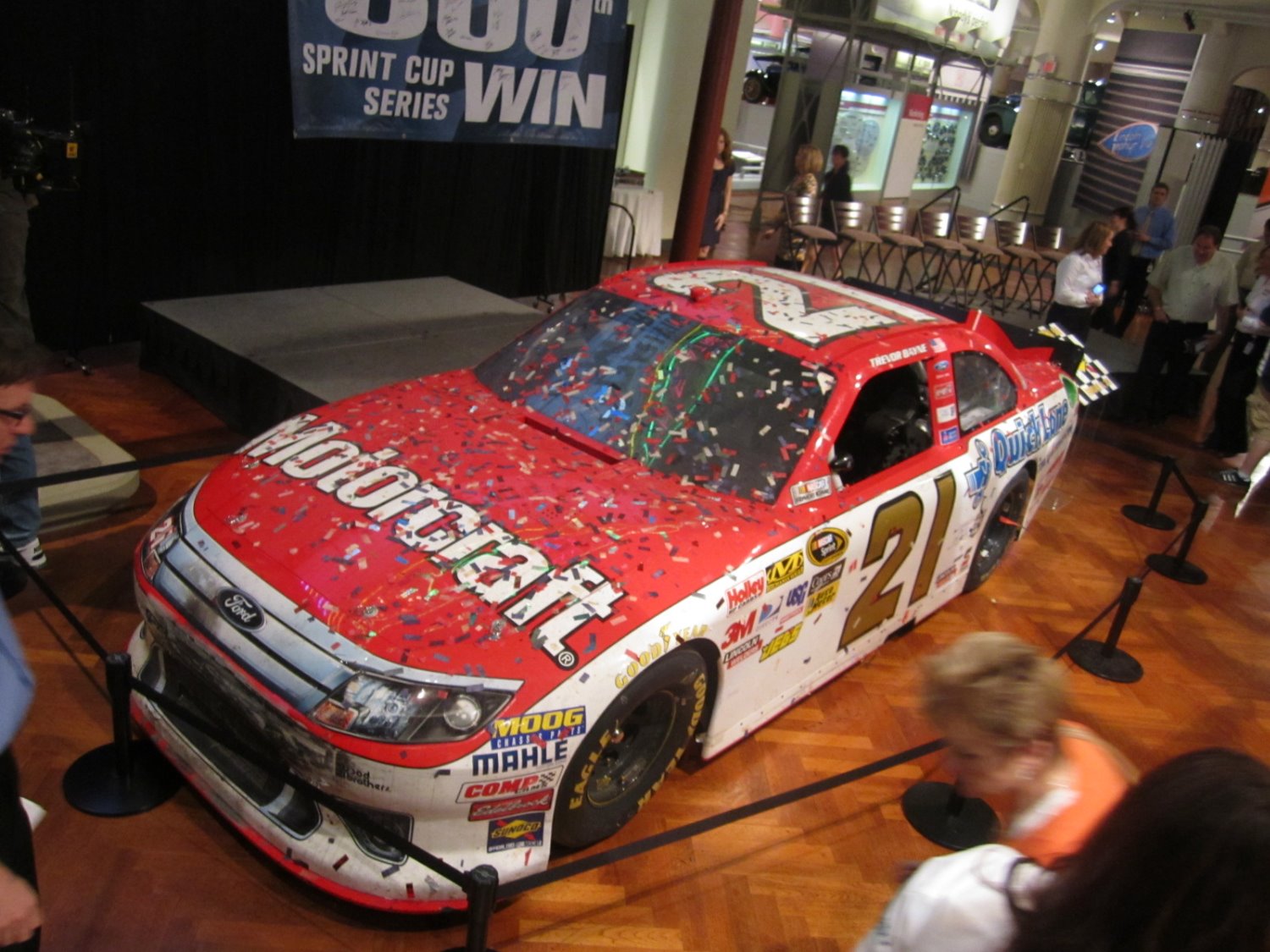 Wood Brothers Racing and Trevor Bayne brought Roush Yates' FR9 engine to Victory Lane in one of the sport's most memorable Daytona 500 races just over one year ago. Now Bayne, along with Eddie, Len, Jordan, Jon, and Kevin Wood have officially turned over the No. 21 Motorcraft/Quick Lane Ford Fusion to the Henry Ford Museum in Dearborn, Michigan.

The Wood Brothers Racing car was inducted on March 23, 2012 into the "Driving America" exhibit next to the Indy 500-winning Lotus that cruised to victory in 1965 behind the quick pit stops designed by Wood Brothers Racing, and Sweepstakes, the car that Henry Ford himself drove to victory against Alexander Winton on Oct. 19, 1901.

"I'm really excited. This is a huge honor for us," said an elated Bayne. "The drink bottle, everything is exactly where it was in the cockpit and that is special to me."

The No. 21 Ford Fusion entered the Henry Ford Museum after sitting at the Daytona 500 Speedway exhibit for a year. The red and white race car was unwashed, with confetti still glued to it from the victory bath of now dried Gatorade and Coca-Cola.

"The car is really dirty," said Eddie Wood. "In fact, it's nasty. The odd thing about it is there's no champagne on it like you usually have in Victory Lane because Trevor was 20 at the time, so they didn't allow it there, which is really cool. It's a great honor to have our car in here."

Bayne's monumental victory not only revived Wood Brothers Racing by giving them their first Sprint Cup Series win in over ten years, but it also provided Ford Racing with their 600th Sprint Cup victory.

"People often ask me what the most memorable race I have attended was," Edsel Ford said. "Certainly being with my father at LeMans in 1966, when Ford beat Ferrari, is clearly one of the highlights. But even though I've been at many memorable wins for Ford, at LeMans or many Formula One races or Trans Am or NHRA, I think being at the Daytona 500 on Feb. 20, 2011 ranks well above them all."

Another man that can attest to the exceptional pride that comes from winning the Daytona 500 is Doug Yates, CEO of Roush Yates Engines and engine builder for Wood Brothers Racing.

"The Daytona 500 has always been a special race for me and my family," said Yates. "Seeing Glen, Leonard, Eddie and Len Wood alongside Trevor Bayne in Victory Lane last year was definitely a highlight for me. It's a great honor to have the No. 21 with our engine sitting in the prestigious Henry Ford Museum."