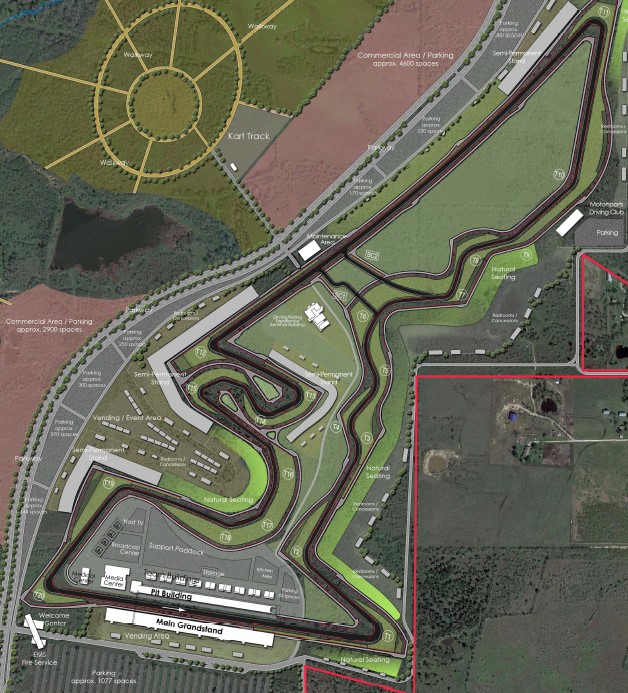 An irony of the Circuit of the Americas project is that two people who played key roles in the design of the 3.4-mile road course promoter Tavo Hellmund and motorcycling legend Kevin Schwantz may have little to do with the track in the future.

Hellmund, who conceived of the project, had a nasty rift with the track's investors and is currently suing them. Schwantz, the 1993 motorcycling world champion and Hellmund's long-time friend, seemed to be the likely face of the circuit's MotoGP Moto GP event, which was announced at a splashy press conference a year ago. But because of a contract dispute, it's now unclear whether MotoGP Moto GP will race at the circuit next year or any year.

Recently, however, Hellmund and Schwantz sat down with the American-Statesman not to talk about their issues with circuit officials, but to share — for the first time — the story of the design of the track.

It's a process that has spanned a half-dozen years and involved scribbling, blueprints, 3D models, high-tech simulators, at least three tracts of land and a few beverages at the Hyatt lobby bar with Johannes Hogrebe.

Hogrebe is a talented engineer with Tilke GmbH who was charged with transforming Hellmund and Schwantz's ideas into racing reality.

The goal of the design was to pay homage to some of the world's most famous courses and to challenge drivers and riders, rewarding them for calculated risk-taking. How well the circuit succeeds at that mission could ultimately determine the fate of the $300 million project.

The track design began more than a half-dozen years ago as a rough sketch drawn by Hellmund in the kitchen of London-based Formula One boss Bernie Ecclestone, a family friend. Along with Ecclestone, Hellmund's father, Gustavo, was instrumental in bringing Formula One to Mexico in the 1980s.

As a teenager, Hellmund worked as a gopher for Ecclestone's F1 team back then, Brabham. As Hellmund worked on his dream track in recent years, Ecclestone would occasionally chide him not to try to include too many turns, not to make it too technical, and to keep it fast.

"He'd say things like don't get too cheeky," Hellmund laughed.

It didn't take long for Hellmund to seek input from Schwantz, whose aggressive racing style has made him a fan favorite.

Although he's now 47, Schwantz is still a risk taker. When he talked to the American-Statesman, he was just beginning his recovery from a painful hairline fracture of his sternum, an injury sustained while mountain biking at City Park shortly before he was going to host a Formula One watch party at his home. Hogrebe said Schwantz has brought the same intensity to designing that he did to racing.

"You don't need a simulator if you have Kevin," Hogrebe said in a phone interview from the Tilke office in Germany. "He's like a simulator himself. He's always driving, braking and accelerating."

By 2008, Hellmund had roughed out a sketch for a track in east Austin. It was not at the current location in Elroy, but at Wildhorse Ranch near the intersection of U.S. 290 and Texas 130, near Manor. Another tract that received serious consideration was the land for Villa Muse, a proposed residential and entertainment project near Manor and in Austin's extraterritorial jurisdiction — or unincorporated land over which Austin has limited zoning control — that never materialized.

In the beginning of 2010, Hogrebe said, the Tilke contingent was shown a tract of land near Elroy.

"We stood on the upper hill looking down and saw the skyline of the city," Hogrebe said. "It became very clear it was the perfect plot for a racetrack. It was a very quick decision with that plot of land."

One attraction was the dramatic change of elevation on the site, a feature the Wildhorse tract also had, but that Villa Muse did not.

"You want to follow the earthworks as much as possible, going down to the deepest spots and then rising up," Hogrebe said.

A limitation of the Elroy site was that some of it was in a flood plain and could not be used for the track itself. But having a site to work with allowed the design to move ahead.

"You never could put the whole thing together until you saw the dirt," Schwantz said.

In 2007, when he was roughing out a sketch and making notes on the track, Hellmund faced a dilemma at the very first turn — should it be similar to the famous uphill Eau Rouge sequence at Circuit de Spa-Francorchamps in Belgium, or Turn One at the old Ã-sterreichring in Austria?

Hellmund eventually went with a personal memory, recalling a lap in a BMW M6 in Austria's scenic Styrian Mountains when he was working for Ecclestone's Brabham team.

"I was in passenger seat with Nelson Piquet driving," Hellmund recalled. Back then Piquet, an F1 world champion, made a hard right after the uphill climb to the Hella-Licht chicane. At the Circuit of the Americas the turn is more severe — well past 90 degrees — and breaks to the left instead of the right.

"It's a little bit of an optical illusion; you're still running 180 or 190 (miles-an-hour). You're braking and you're still going uphill," Hellmund said. Drivers will drop to 70 miles-an-hour as they round the corner.

The turn was later altered after Tilke received feedback from former F1 driver Alexander Wurz, who had ran the track through a McLaren simulator.

The turn was widened, but not in the way suggested, which was to add asphalt on the outside.

Schwantz and Hellmund figured a driver who took an outside line would either crash or have to lay off the gas if his gambit didn't work. Instead, they asked that the turn be widened on the inside.

"If you look at the Brazilian Grand Prix, this is the Senna curve," Hellmund said. The late Ayrton Senna is Hellmund's favorite driver, but the turn was incorporated for its shape and downward slope rather than its name.

The biggest difference between the Circuit of the Americas' turn and that of Interlagos is the difference in length from the preceding turn.

Schwantz said that after testing a driver's courage going up on the first turn, "We want to see how well you can tolerate it going back down."

At the Circuit of the Americas, turns 4, 5 and 6 are basically the Maggots, Becketts and Chapel sequence at England's Silverstone, which first hosted the British Grand Prix in 1948.

A favorite among drivers and fans, Silverstone's Maggots, Becketts and Chapel are an ultra-fast series of left and right turns that are taken at an average of 120 mph.

Drivers say precision and bravery are required to keep cars on the right line through the turns, which former driver David Coulthard has described as a "roller-coaster ride."

Drivers will enter the sequence in Austin at about 180 miles an hour and pull about 3.7 Gs through the turns.

At Silverstone, drivers exiting Chapel then head into a straightaway. Not so at Circuit of the Americas. Turns 7 and 8 are sharp, designed to reduce speed.

According to Hellmund and Schwantz, it was Hogrebe who came up with those corners to set up Turn 10, which isn't modeled on any famous turn but promises to be one of the most exciting at the track.

Both Hellmund and Schwantz wanted a blind turn for the track.

At the Elroy site, it would have required a lot of runoff area — and expensive excavation — if the cars were moving too fast on the elevated turn.

The trick was how to keep the turn exciting even at a slower speed.

"Kevin came up with the idea of having the crest behind the apex," Hellmund said.

Hogrebe said, "We come across a hill. We are going 90 miles an hour and this is very interesting. The visibility is not given."

A mistake in the line could set up a passing opportunity for a following car — if it did not also take the same line as the leader.

As the drivers come out of the blind turn in slightly different lines, they'll scream down a hill, reaching about 180 mph before hitting Turn 11, where they'll have to do some hard braking — dropping down below 65 mph to cope with a turn that is well beyond 90 degrees.

"We believe it creates a fantastic point for overtaking," Hogrebe said. "We widened the left edge."

After 11 comes the back straightaway of 1.2 kilometers that's not completely straight.

"It rises a little bit before it drops," Schwantz said.

Very soon after Hellmund talked with Schwantz about his dream track, Schwantz had a suggestion: It should have a Hockenheim section.

"I always thought Hockenheim was really good," Schwantz said. "You're out in the woods for so long and then you've got five or six corners to decide it."

A battle Schwantz had with Wayne Rainey in Hockenheim's stadium section is stuff of legend and YouTube videos.

Schwantz hit the brakes late, causing his back tire to shimmy and shake, but was able to hold off Rainey through the turn and win.

Schwantz said there was a dispute for awhile over whether the track would get a Hockenheim section; Hogrebe said it was only that the redesigns took some time.

Wahl has previously said that if he were watching the race from the stands, this is where he would sit. Hellmund said the section should be a little slower than Hockenheim, but that allows fans to see the cars and motorcycles a little bit longer.

From Germany, drivers will go quickly to Turkey.

The Turkish Grand Prix never caught on with fans. It debuted in 2005 and was dropped from this year's calendar. Istanbul Park, however, was one of his Tilke's most popular circuits with drivers, who particularly like the multi-apex Turn 8. Drivers will be going into turns 16, 17 and 18 in a different direction in Elroy than they would be at Turn 8 in Istanbul, but the effect should be the same.

"The drivers are going to refer to it as one corner, but it's a triple-apex," said Hellmund. "This is slightly downhill and Istanbul is slightly uphill. It should be faster than Istanbul. The cars should be doing 180."

These turns are mainly a way to get back to the straightaway and the uphill climb to the first turn.

There is something, however, to notice on the straightaway — according to Hellmund, the pit lane is wider than it is for F1 tracks and designed to accommodate American-style racing, including NASCAR.

As for the name of the track, Hellmund said that too was inspired by something, a Mexican horse track called Hippodrome de las Americas. The Statesman