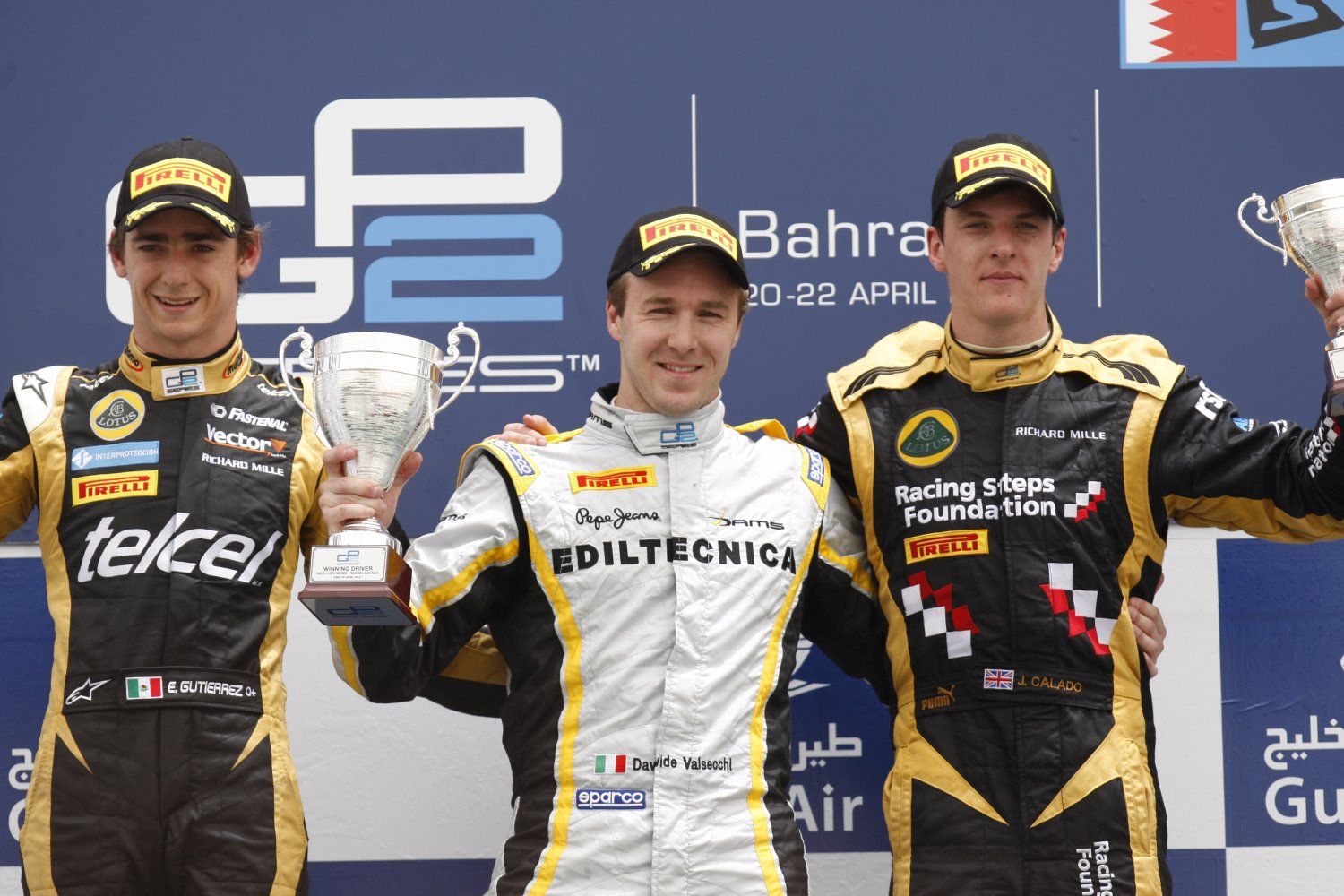 It was another good day at the office today for Davide Valsecchi: the DAMS ace pocketed a second consecutive win in Bahrain this Sunday in Bahrain, from P8 on the grid. The Italian spoiled Esteban Gutierrez’ race when he passed the Mexican on the last lap and dashed to the checkered flag. James Calado completed the podium.

Action-packed seemed to have been the key word again this morning as the twenty-six GP2 cars made their way to the grid for the Sprint Race. The start was aborted when Felipe Nasr who was last on the grid stopped a few meters away from his starting position. More drama occurred when Tom Dillmann stalled from P3 for the second formation lap. Both men were pushed back into the pitlane and had to settle for a start from there.

When the lights went off, Calado made the perfect gateway from P4 to take the lead. Fabio Leimer and Gutierrez also made their way to P2 and P3 respectively, but the Mexican quickly found a way round the Swiss and after just one lap into the race, both Lotus GP cars were in control of the rest of the pack. The teammates started a battle of their own with Gutierrez putting immense pressure on Calado. As they were busy fighting off each other, Leimer snuck past Gutierrez and then easily overtook the Brit for the lead on Lap 5.

Calado started to struggle and was unable to keep his teammate at bay. Gutierrez took P2 and tried to close in on Leimer, but the Racing Engineering driver maintained a good pace to build a comfortable gap. Behind the top three, Max Chilton set his sights on Calado. Valsecchi in sixth overtook Luiz Razia and started to pick up the pace. He first passed Chilton and then closed in on a slower Calado before overtaking him for P3.

Leimer was enjoying a 2.3s lead on Gutierrez when he was given a drive through penalty for ignoring yellow flags which handed the lead back to Gutierrez and put Calado on the podium. Further down the pack, the battle intensified between Chilton and Razia, the latter eventually getting rid of the feisty Brit for P4. At the front, Valsecchi reduced the gap from 2.4s to one second with Gutierrez, and on the last lap he inevitably got past the Mexican to cross the finish line just three tenths ahead of Gutierrez.

Calado managed to retain P3 ahead of Razia, Chilton, Nasr (who made an incredible come back from last), Jolyon Palmer and Simon Trummer. Valsecchi now leads the drivers’ standings on 70 points with Razia on 57. Gutierrez stands in third place six points ahead of his teammate Calado whilst Chilton is fifth on 35 points.

The third round of the 2012 GP2 Series will take place next week on Friday 27th and Saturday 28th of April at the Bahrain International Circuit.