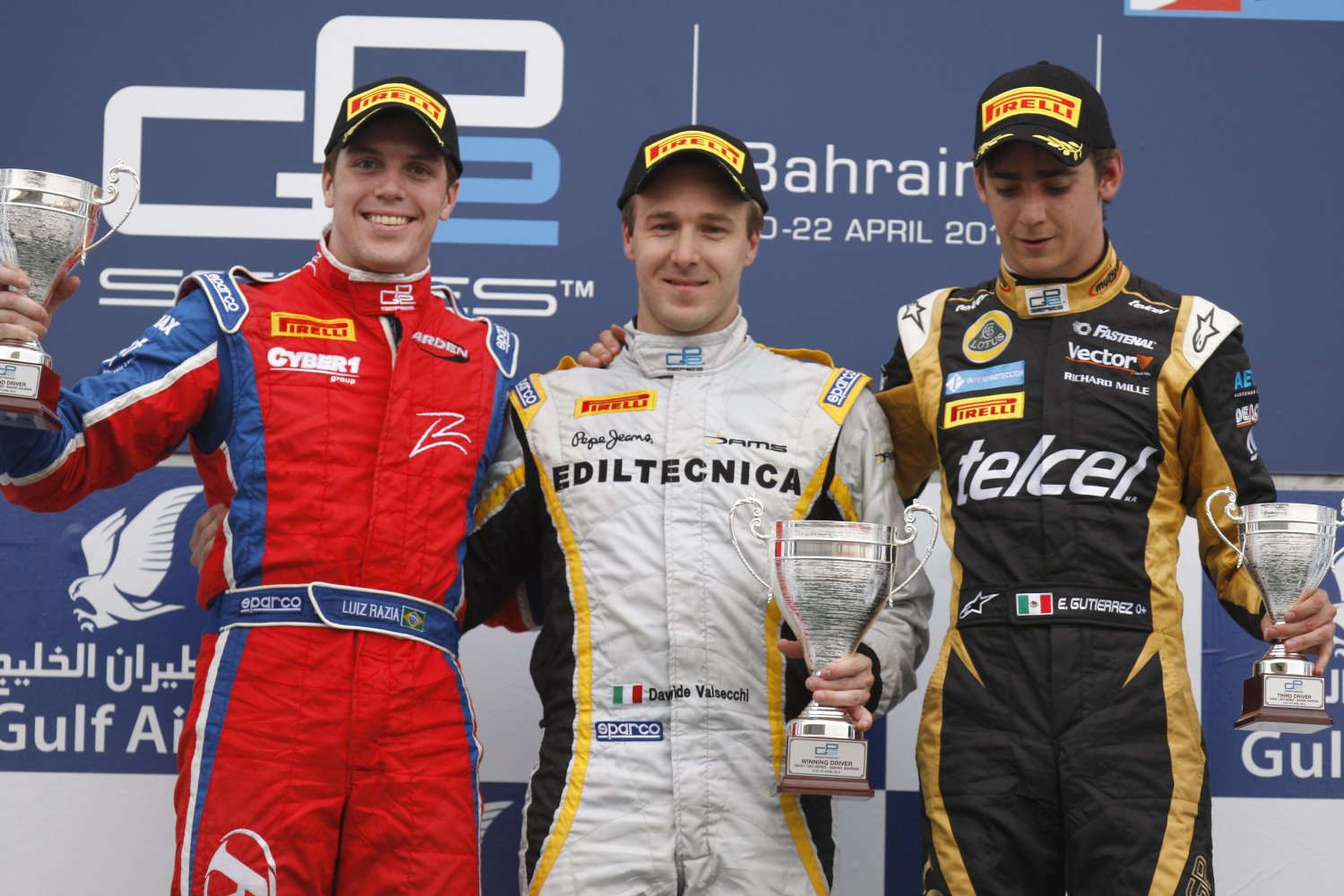 Davide Valsecchi has once again proved his speed and skills at the Bahrain International Circuit: the DAMS ace dominated today’s feature race from start to finish in spite of a safety car period around mid-race. Valsecchi crossed the finish line 7.7s ahead of Luiz Razia. Esteban Gutierrez snatched third place over Max Chilton on the last lap.

When the lights went out, Valsecchi made the perfect start and kept the lead from Gutiérrez. Further down, Johnny Cecotto made his way to P3 whilst Razia moved up from eighth on the grid to P5, sneaking in behind Felipe Nasr. From then on, Valsecchi pulled away and started to build up a gap that none of his closest rivals could ever reduce.

James Calado was the first of the top ten drivers to pit on Lap 8. On track, Razia was on a mission and passed Nasr for P4 at Turn 1. At the front, Valsecchi was already 6.4s ahead of Gutierrez, so the Mexican decided to pit and so did Razia, but a problem on the Lotus GP man’s rear right tires meant that he when he rejoined the track he had dropped behind Calado, Razia and Chilton (who had pitted one lap earlier).

When Valsecchi pitted on lap 13, he handed the lead to Fabio Leimer, but the Italian was back in control of the pack a lap later when the Racing Engineering man re-entered the pits. Nathanael Berthon then in P2 and who still had to observe his mandatory pitstop was much slower than his pursuers and Chilton – the closest one – was eager to pass him, but it was Calado who took advantage of the battle in front of him to sneak ahead of the pair.

The battle for P6 intensified and ended in tears for Nasr and Cecotto. The two cars collided and stopped on track calling for a safety car period. Valsecchi’s efforts to build a comfortable gap of 11.4s was reduced to nothing, and at the restart he pulled away again from Calado. The British rookie started to struggle on his tires and it became more and more difficult to fend off Razia’s attacks. The Brazilian finally got through on Calado to claim P2. In response, Valsecchi pushed even harder and set the quickest lap time. Chilton and Gutierrez also overtook Calado and started a fight of their own for P3 that lasted until the last lap: the Carlin racer tried with all his might to block the Lotus man, but Gutierrez eventually passed him in a gutsy move to step onto the podium.

At the checkered flag, Valsecchi crossed the finish line ahead of Razia and Gutierrez. Chilton was fourth ahead of Calado. Tom Dillmann – back from P15 on the grid – was sixth and scored his first points in GP2, a just reward to a fantastic race from the French rookie. Leimer was seventh ahead of Fabio Onidi, Rio Haryanto and Brendon Hartley, the latter who had started from last on today’s grid. Onidi will start from tomorrow’s Sprint Race in reverse pole position.