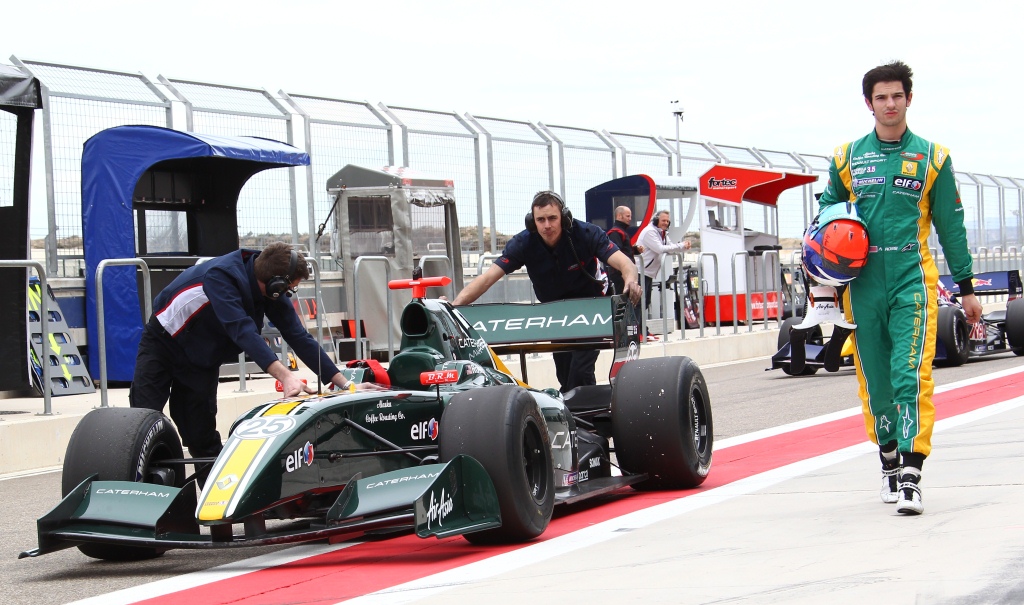 The new Arden Caterham Formula Renault 3.5 team completed its final pre-season test in northern Spain this week. After clocking up its maiden kilometers, gaining experience of the new systems and collating seven sets of dry tires data, whilst at the same time building relationships within the rookie team, Alexander and Arden Caterham are confident of progress ahead of their inaugural race on 5th May.

After a rain drenched test in Barcelona, the FR3.5 teams were relieved to find ideal conditions in Alcaniz for the first day of testing on Wednesday. The morning session ran smoothly, with Alexander running qualifying set-ups, but the team struggled to find early pace. The afternoon session began with the 26-strong field practicing race-start procedures on the grid before a slow formation lap. The focus then turned back to testing and at the end of the day Alexander had completed 51 laps to finish 18th overall on the time sheet.

The final day of pre-season collective testing began with a surprise written test by Renault on the drivers’ knowledge of the regulations. The afternoon commenced with pit stop practice but was soon interrupted by a heavy rain storm, bringing out the full wet tires for track running. Alexander completed 69 laps for the day and set a lap time of 1:40.315 to finish in 19th position, closing in within one second of veteran FR3.5 teams.

Alexander Rossi, Car No: 25, Arden Caterham Motorsport
“We had a lot to accomplish this week as, unlike many of the other teams we had no back data or baselines to work from heading into these tests. As running was very limited in Barcelona, we were happy to have better weather conditions when we arrived in Spain this week. The lap times will come, I’m confident, and feel privileged to be part of building a brand new team in WSR from the ground up. Since this was our real first two days of dry running and reliability, we are happy to be within one second of the established teams. On day two we turned the car on its head and managed to close the gap to the front runners by 0.8 second. We still have a long way to go, but the car feels good and the test, whilst being challenging, was constructive from the minute we arrived. My own experience from the series last year, coupled with the great work being done by the team, gives me an awesome opportunity to develop the car. I have full support from Arden’s management and my engineering staff to do this and I’m excited about the future. We won’t need many more days of dry running to be near the front and since our first race will be at AragÂ¢n, I’m confident we will be right there."

George Commins, Engineer, Car: 25, Arden Caterham Motorsport
“It’s been great to have two days of dry running at Motorland Aragon where we have worked through a detailed test plan to further our understanding of the new Formula Renault 3.5 car. We made some significant gains in to the performance of the cars over the two days and are confident that come the first race in two weeks we will be able to challenge at the front of the field."

Julian Rouse, Sporting Director, Arden Caterham Motorsport
“The Motorland test was a good chance for us to move forward with a lot of dry weather testing. The positive from this test is that the cars completed a lot of laps without problems and the team operated well together. However, it is clear that we still have some work to do before the first race to be able to provide Alexander the platform he needs and deserves to be able to run at the front of the grid. Alexander worked extremely well to help us develop a more competitive setup on this new WSR car over the two day test."