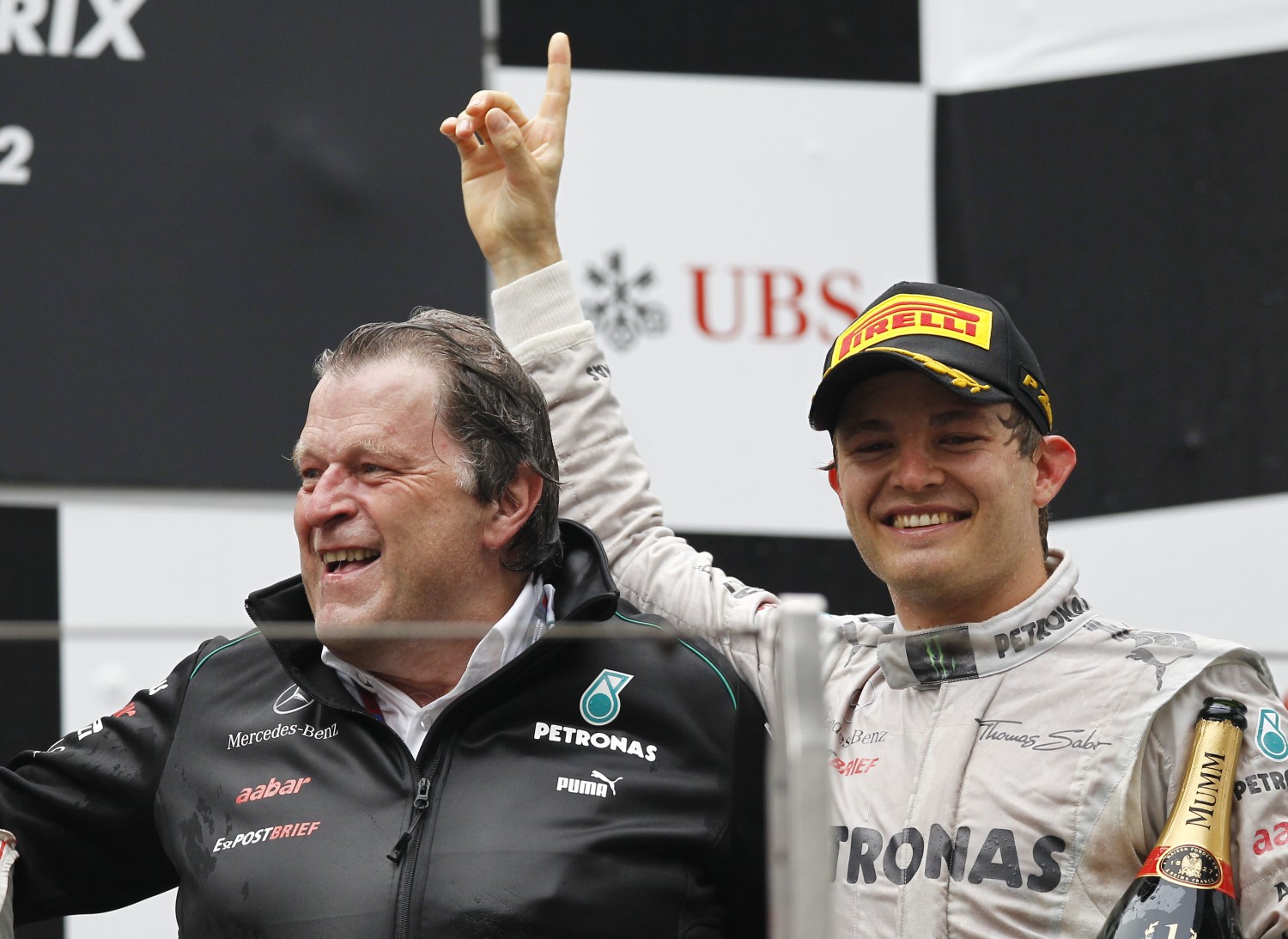 In motorsport, there are days when the stars simply seem to align and everything comes together perfectly. Sunday in Shanghai was one of those days. Nico Rosberg won his first Grand Prix at his 111th attempt – 111 years (and three weeks) after the first ever Mercedes took victory at the 1901 Nice Speed Weeks. What's more, this year marks exactly three decades since Nico's father Keke became world champion – in a season that, just like 2012, saw three different winners of the first three races (on the road, at least, before the first two finishers in Brazil were disqualified for technical irregularities…)

Yesterday, Nico also became a member of a very select club: drivers who have won a Grand Prix in a Silver Arrow. The story of the silver Mercedes-Benz Grand Prix cars stretches back to June 1934, and the debut of the Mercedes-Benz W 25 at the Eifelrennen, held on the NÃ¼rburgring. The winner that day was Manfred von Brauchitsch, and Nico has now written a new chapter in that proud 78-year tradition.

In total, eight drivers have now won Grands Prix at the wheel of a works Mercedes-Benz: Manfred von Brauchitsch, Rudolf Caracciola, Luigi Fagioli, Juan Manuel Fangio, Hermann Lang, Stirling Moss and Richard Seaman. Since Formula One began in 1950, just three men have this honor: Fangio, Moss and Rosberg. Nico's win was the 10th for a works Mercedes-Benz Silver Arrow in F1. What's more, it was the first victory for a German driver at the wheel of a Silver Arrow since Hermann Lang triumphed in the 1939 Swiss Grand Prix – with the two successes separated by 26,537 days.

However, the success on Sunday was not just limited to the top step of the podium. With McLaren-Mercedes drivers Jenson Button and Lewis Hamilton finishing second and third, it was the second time in three years that Mercedes power had filled the podium in China – and just the third time in Formula One history.

Indeed, Nico's win was the 90th for Mercedes-Benz engines in Formula One and made him the 12th driver to win in Formula One with Mercedes-Benz power. Since David Coulthard took the company's first victory of the modern era at the 1997 Australian GP with McLaren-Mercedes, Mercedes has won 81 times from 264 starts – a winning percentage of just over 30%. With three all-Mercedes front rows in three races this season, the Brixworth-built V8 is justifying its status as the sport's unofficial world champion engine, having scored more points than any other in the past three seasons.

Yesterday's victory was an historic moment, and the first for a works Silver Arrow in 57 years. What does it mean?
"It's a reward for all our colleagues who have put in so much work and who never let themselves be distracted from their dream of winning races in Formula One. It's also the perfect example that you can achieve what you want to when the right conditions are put in place and you are totally committed to the direction you are heading in. Nico showed great class yesterday: it was a composed win, with an advantage of more than 20 seconds."

What were your emotions during the race and when Nico crossed the line?
"I was actually pretty calm – I had a good feeling and after a few laps, I was already thinking that we could get the job done. It was unfortunate that Michael retired because of an incorrectly attached wheel nut after his pit-stop – he had been running second and we could maybe even have scored a one-two. It was a great feeling as Nico took the flag – just pure joy for all the people who have worked so hard for this win."

And it wasn't just Nico – there were three Mercedes-powered drivers on the podium…
"Three out of three was like the cherry on top of the cake – you can't get any better than that. We have worked long enough with McLaren and also played our part in helping McLaren-Mercedes become what it is today. We raced and beat them fair and square – and they were the very first people to come and congratulate us."

Nico joined a very select club of drivers who have won a Grand Prix with a Silver Arrow. What can we expect from him now?
"Nico will be as good as we allow him to be. He showed as much yesterday. And Michael is driving to that level too, when his car allows him to."

And what thoughts did you have for Michael as he watched the race from the garage?
"It was a real shame for Michael – he had earned his place on the podium. But it will come, and now everybody who at some point criticized the decision can see how important, and how right, it is to have Michael Schumacher in our team. Michael has out-qualified Nico at two of three races this year, and Nico won yesterday. What's more, there's a nice trend to his grid positions so far in 2012: fourth in Australia, third in Malaysia, second in China."

You are a pure racer, Norbert. What do you make of the season far, with three winners from three races, and 17 drivers having already scored points?
"I think this could be one of the best Formula One seasons of all time and harder fought than ever – and that makes our win even more special. The reigning world champion was little more than three tenths slower than the fastest car in second qualifying – and he had to start 11th. Rosberg started from pole with Vettel outside the top ten – it just goes to show F1's power to surprise."

Does the result change the team's objectives for this year?
"We want to continue improving, keep our feet on the ground and avoid making any unnecessary waves – there are already more than enough of those in Formula One. What I particularly liked was that the whole world joined us in celebrating the first win for our young team. Daimler spends less than half the sum on Formula One than it did five years ago and we have nevertheless managed to build a winning team. The victory on Sunday will only push us to get even better."