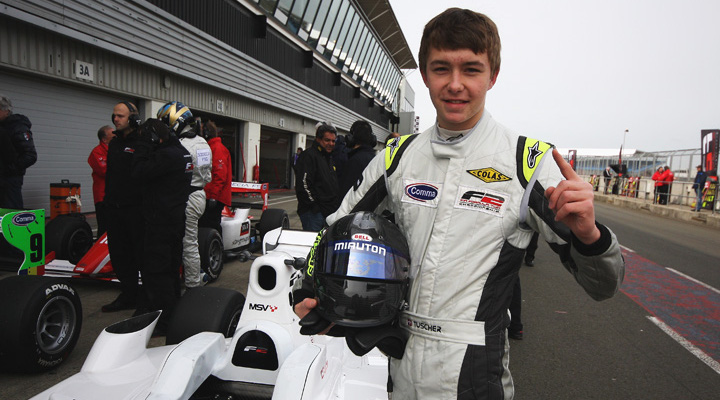 The Swiss teenager put in a blistering lap with just five minutes to go in the session to break into the 1:46s – showing the increased pace of the upgraded F2 car – to secure his maiden F2 pole. Luciano Bacheta was the best of the Brits to finish second with 2011 F2 runner-up Christopher Zanella in third. Romanian's Mihai Marinescu and Alex Fontana completed the top five.

Drivers were met with dry but chilly conditions for the 30-minute qualifying session which saw Tuscher set the early pace before Marinescu continued where he left off from yesterday to go top. Markus Pommer, who showed front running pace throughout free practice, then spun at Luffield bringing out the yellow flags and ending his session. The German will now start from the back for today's 21-lap race.

Bacheta and Zhu were also looking quick lying third and fourth respectively with 22-year-old Zanella still yet to set a fast lap as he waited for the track to clear. The Swiss, who saved a set of tires by not going out in free practice two yesterday, then took to the track with just over 10 minutes left on the clock.

Hurst, who joins the series from Formula Renault BARC, then shot into the top five before Zanella put in a hot lap to go P2, just two tenths shy of Marinescu. Hurst continued to improve to move into second as the order at the front continued to change.

With five minutes remaining, teenager Tuscher then hooked up a superb lap to go top for his maiden F2 pole and the first driver to dip the 1:46s. Bacheta then went P2 with Zanella in third and Marinescu in fourth.

European F3 Open champion Fontana completed the top five ahead of Dino Zamparelli after the Brit put in a late surge. Fellow countryman Daniel McKenzie went seventh fastest for the session followed by Hurst to complete a trio of Brits. Polish newcomer Kevin Mirocha was ninth with China's David Zhu in tenth. Plamen Kralev also impressed during the session to finish P11.

Speaking afterwards Tuscher said: “This is my first weekend and I was just trying to work on the set up and set a fast lap. Everything felt good and I’m really happy with the result which I wasn’t expecting! I’m feeling a little nervous ahead of the race as it’s a bit intimating but I will do my best and just see how the race goes."

Today's opening race gets underway at 14:40 (local time), with full coverage on www.formulatwo.com.