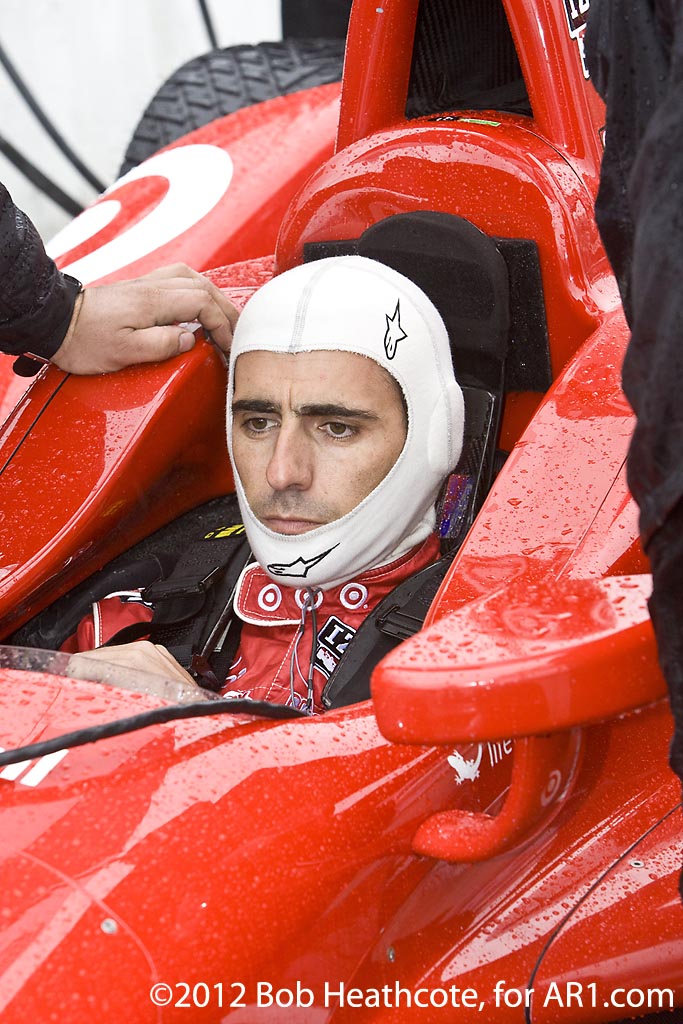 Franchitti said he was angered by media speculation that the actress had altered her face and gave her the phone number of an attorney he's used in Scotland.

"I had read something about these comments on her face, and I got really (mad) and I said to her, 'This is outrageous. This has gone too far,'" he told the Associated Press. "But that's all I did. My reaction to it got her thinking, and then she did everything else. She's the one who had the courage to go out there, and I am really proud of her for doing it."

Judd on Monday released an essay called "The Conversation" on The Daily Beast that decried the speculation about her appearance. She said the puffiness in her face was caused by steroids she was taking to treat a sinus infection.

"The conversation was pointedly nasty, gendered, and misogynistic and embodies what all girls and women in our culture, to a greater or lesser degree, endure every day," Judd wrote, stressing the issue is about "the assault on (women's) body image."

Franchitti, the four-time Izod IndyCar Series champion, said the couple has been amazed at the reaction to Judd's piece.

Since her essay was published, she's done numerous national television interviews discussing the issues women face and has posted on Twitter some of the responses she's received. Many of them are blogs by women who have faced similar attacks about their appearance or body image.

"The reaction from people has been incredible," Franchitti said. "Her thing was it was not about her — the initial piece was about her, but it was to get it started, to get this conversation kick started. That's what she was trying to do, get this big discussion going.

"I am just really proud for having the courage to do it, because I think it would be easier to be status quo and have people write lies about you. Good for her for standing up." USA Today

04/14/12 The Conversation about women’s bodies exists largely outside of us, while it is also directed at (and marketed to) us, and used to define and control us. The Conversation about women happens everywhere, publicly and privately. We are described and detailed, our faces and bodies analyzed and picked apart, our worth ascertained and ascribed based on the reduction of personhood to simple physical objectification. Our voices, our personhood, our potential, and our accomplishments are regularly minimized and muted.

As an actor and woman who, at times, avails herself of the media, I am painfully aware of the conversation about women’s bodies, and it frequently migrates to my own body. I know this, even though my personal practice is to ignore what is written about me. I do not, for example, read interviews I do with news outlets. I hold that it is none of my business what people think of me. I arrived at this belief after first, when I began working as an actor 18 years ago, reading everything. I evolved into selecting only the “good" pieces to read. Over time, I matured into the understanding that good and bad are equally fanciful interpretations. I do not want to give my power, my self-esteem, or my autonomy, to any person, place, or thing outside myself. I thus abstain from all media about myself. The only thing that matters is how I feel about myself, my personal integrity, and my relationship with my Creator. Of course, it’s wonderful to be held in esteem and fond regard by family, friends, and community, but a central part of my spiritual practice is letting go of otheration. And casting one’s lot with the public is dangerous and self-destructive, and I value myself too much to do that.

However, the recent speculation and accusations in March feel different, and my colleagues and friends encouraged me to know what was being said. Consequently, I choose to address it because the conversation was pointedly nasty, gendered, and misogynistic and embodies what all girls and women in our culture, to a greater or lesser degree, endure every day, in ways both outrageous and subtle. The assault on our body image, the hypersexualization of girls and women and subsequent degradation of our sexuality as we walk through the decades, and the general incessant objectification is what this conversation allegedly about my face is really about.

One: When I am sick for more than a month and on medication (multiple rounds of steroids), the accusation is that because my face looks puffy, I have “clearly had work done," with otherwise credible reporters with great bravo “identifying" precisely the procedures I allegedly have had done.

Two: When my skin is nearly flawless, and at age 43, I do not yet have visible wrinkles that can be seen on television, I have had “work done," with media outlets bolstered by consulting with plastic surgeons I have never met who “conclude" what procedures I have “clearly" had. (Notice that this is a “back-handed compliment," too—I look so good! It simply cannot possibly be real!)

Three: When my 2012 face looks different than it did when I filmed Double Jeopardy in 1998, I am accused of having “messed up" my face (polite language here, the F word is being used more often), with a passionate lament that “Ashley has lost her familiar beauty audiences loved her for."

Four: When I have gained weight, going from my usual size two/four to a six/eight after a lazy six months of not exercising, and that weight gain shows in my face and arms, I am a “cow" and a “pig" and I “better watch out" because my husband “is looking for his second wife." (Did you catch how this one engenders competition and fear between women? How it also suggests that my husband values me based only on my physical appearance? Classic sexism. We won’t even address how extraordinary it is that a size eight would be heckled as “fat.")

Five: In perhaps the coup de grace, when I am acting in a dramatic scene in Missing—the plot stating I am emotionally distressed and have been awake and on the run for days—viewers remarks ranged from “What the f–k did she do to her face?" to cautionary gloating, “Ladies, look at the work!" Footage from “Missing" obviously dates prior to March, and the remarks about how I look while playing a character powerfully illustrate the contagious and vicious nature of the conversation. The accusations and lies, introduced to the public, now apply to me as a woman across space and time; to me as any woman and to me as every woman.

That women are joining in the ongoing disassembling of my appearance is salient. Patriarchy is not men. Patriarchy is a system in which both women and men participate. It privileges, inter alia, the interests of boys and men over the bodily integrity, autonomy, and dignity of girls and women. It is subtle, insidious, and never more dangerous than when women passionately deny that they themselves are engaging in it. This abnormal obsession with women’s faces and bodies has become so normal that we (I include myself at times—I absolutely fall for it still) have internalized patriarchy almost seamlessly. We are unable at times to identify ourselves as our own denigrating abusers, or as abusing other girls and women.

A case in point is that this conversation was initially promulgated largely by women; a sad and disturbing fact. (That they are professional friends of mine, and know my character and values, is an additional betrayal.)

That the conversation about my face was initially promulgated largely by women is a sad and disturbing fact.

News outlets with whom I do serious work, such as publishing op-eds about preventing HIV, empowering poor youth worldwide, and conflict mineral mining in Democratic Republic of Congo, all ran this “story" without checking with my office first for verification, or offering me the dignity of the opportunity to comment. It’s an indictment of them that they would even consider the content printable, and that they, too, without using time-honored journalistic standards, would perpetuate with un-edifying delight such blatantly gendered, ageist, and mean-spirited content.

I hope the sharing of my thoughts can generate a new conversation: Why was a puffy face cause for such a conversation in the first place? How, and why, did people participate? If not in the conversation about me, in parallel ones about women in your sphere? What is the gloating about? What is the condemnation about? What is the self-righteous alleged “all knowing" stance of the media about? How does this symbolize constraints on girls and women, and encroach on our right to be simply as we are, at any given moment? How can we as individuals in our private lives make adjustments that support us in shedding unconscious actions, internalized beliefs, and fears about our worthiness, that perpetuate such meanness? What can we do as families, as groups of friends? Is what girls and women can do different from what boys and men can do? What does this have to do with how women are treated in the workplace?

I ask especially how we can leverage strong female-to-female alliances to confront and change that there is no winning here as women. It doesn’t actually matter if we are aging naturally, or resorting to surgical assistance. We experience brutal criticism. The dialogue is constructed so that our bodies are a source of speculation, ridicule, and invalidation, as if they belong to others—and in my case, to the actual public. (I am also aware that inevitably some will comment that because I am a creative person, I have abdicated my right to a distinction between my public and private selves, an additional, albeit related, track of highly distorted thinking that will have to be addressed at another time).

If this conversation about me is going to be had, I will do my part to insist that it is a feminist one, because it has been misogynistic from the start. Who makes the fantastic leap from being sick, or gaining some weight over the winter, to a conclusion of plastic surgery? Our culture, that’s who. The insanity has to stop, because as focused on me as it appears to have been, it is about all girls and women. In fact, it’s about boys and men, too, who are equally objectified and ridiculed, according to heteronormative definitions of masculinity that deny the full and dynamic range of their personhood. It affects each and every one of us, in multiple and nefarious ways: our self-image, how we show up in our relationships and at work, our sense of our worth, value, and potential as human beings. Join in—and help change—the Conversation. The Daily Beast