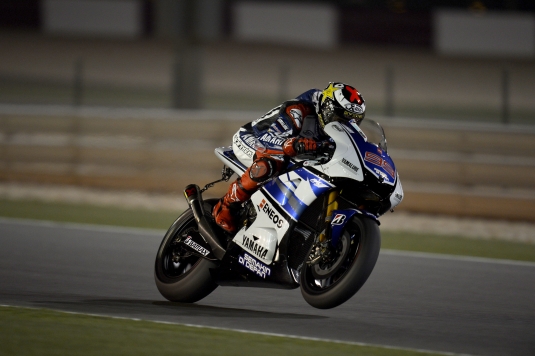 The final free practice this evening ahead of Sunday’s Grand Prix of Qatar saw Yamaha Factory Racing rider Jorge Lorenzo set the MotoGP pace. The Mallorcan finished in second place in the penultimate practice session earlier in the evening, 0.214 seconds behind leader Casey Stoner as he continued to develop his set up. A strong final session on hard tires was then delivered before a softer rear option at the end provided the extra speed to take the top spot, 0.154 seconds ahead of fellow Yamaha rider Cal Crutchlow in second.

Repsol Honda rider Dani Pedrosa crashed in FP2, without sustaining any injury, and was only able to use one bike in the second session of the evening, whilst his mechanics worked hard to build up the damaged machine.

The riders return on track tomorrow night for the first qualifying session of the season, which will decide the starting grid for the Grand Prix of Qatar.