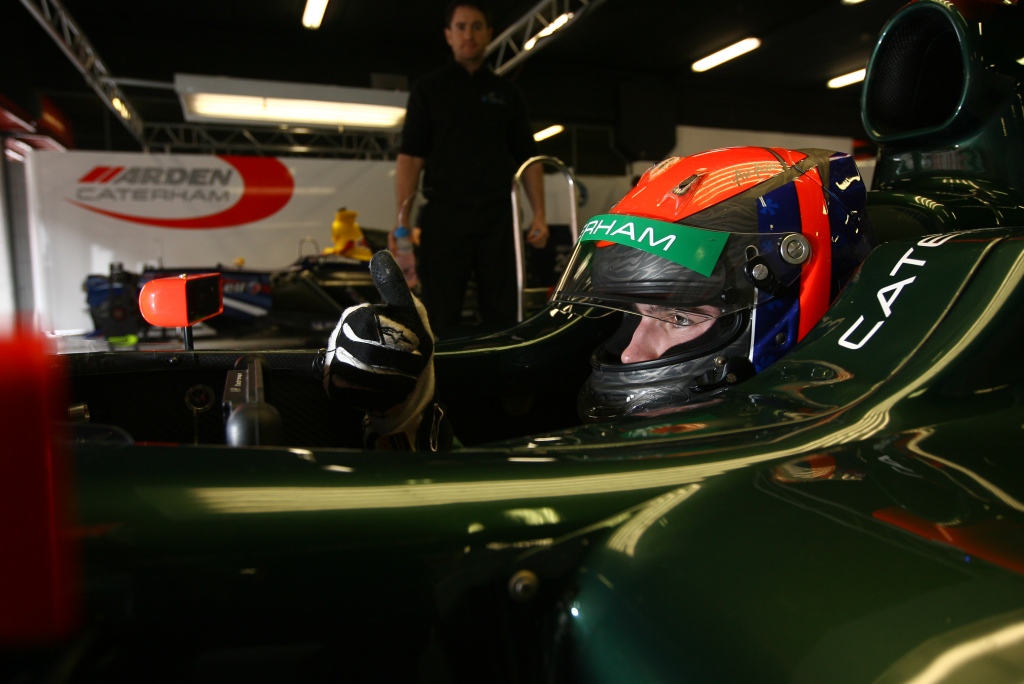 Alexander Rossi joined his Arden Caterham Motorsport World Series by Renault team for the second collective FR3.5 test at the Circuit de Catalunya, near Barcelona this week. However torrential rain, mixed conditions, mechanical and electrical car issues meant that the newly formed squad made limited progress into its planned running program on either day of the test.

Day one provided extremely wet conditions from the start, but with Alexander setting the fastest lap time straight out of the box. Unfortunately luck was not on his side and on lap 4 he lost his engine and had to return to the garage.

The rookie Arden Caterham team spent the next six hours checking all aspects of the car to ascertain the problem, before the initial suspected engine issue was finally resolved. Alexander returned to the track with only half an hour of the afternoon session remaining, only to be hindered by 23 Red Flags punctuating his valuable track time. In a window where the track had dried out enough, the team sent Alexander out on new slick tires, but he was only able to complete one lap before the afternoon session was timed out. At the end of the day Alexander had only completed 19 laps to finish 16th overall on the time sheet.

On day two the Arden Caterham team started to make headway in to its morning testing program when Alexander’s car encountered an electrical issue. Following sometime in the pits whilst his team worked on a resolution, Alexander then set out to complete only 28 laps in the morning session. The afternoon brought excessively changeable weather conditions and with tires that afforded him grip in either full wet or dry conditions, Alexander and his team struggled to extract the maximum out of his No: 25 car. With several more Red Flag situations coupling the team’s tire issues, Alexander was unable to improve on his best lap time of 1:49.530 and 10th position overall after completing 66 laps for the day.

Alexander Rossi, Car No: 25, Arden Caterham Motorsport
“It has been a slightly frustrating test as we lost nearly all of day one. With a new car the mileage and accumulated data in testing is invaluable to the team. These past two days have been all about timing and that’s the frustrating part, but it’s a big part of the sport and as a driver you never want to get used to it. In such changeable weather conditions, finding that window of opportunity to run on the right tires is crucial, and this combined with so many Red Flags made it a tough call when to send me out. We were very quick in the full wet or dry, but in the damp conditions we ran into some teething problems. There were also a lot of positives from the test and things discovered we would not have found had we not had the down time on day one. I feel right at home with the team and work very well with everyone. I’ll spend quite a bit of time in the workshop over the next couple of weeks as we prepare for final test at Aragon at month end. I’m confident with some mileage and dry running that we’ll be in good shape for the opening rounds next month."

George Commins, Engineer, Car: 25, Arden Caterham Motorsport
“It's been a productive two days at Barcelona at which we have collated a lot of data and moved forwards with developing the car in the wet. Alexander has integrated very well in to the team, providing fantastic feedback and direction in the challenging conditions. We are looking forward to the final test in Motorland Aragon where we aim to complete a comprehensive test plan in hopefully dry conditions."

Julian Rouse, Sporting Director, Arden Caterham Motorsport
“Barcelona has been a challenging couple of days, having to deal with technical issues that are frustrating, but not uncommon with new cars. However, Alexander has again done a fantastic job working with everyone on the team, helping to continue to move forward with our understanding of how the car needs to be set up for the damp and wet conditions. Missing day one with technical issues really put us on catch up mode from a performance side, but we have gathered some really useful data on day two that will move us forward in the up and coming events."