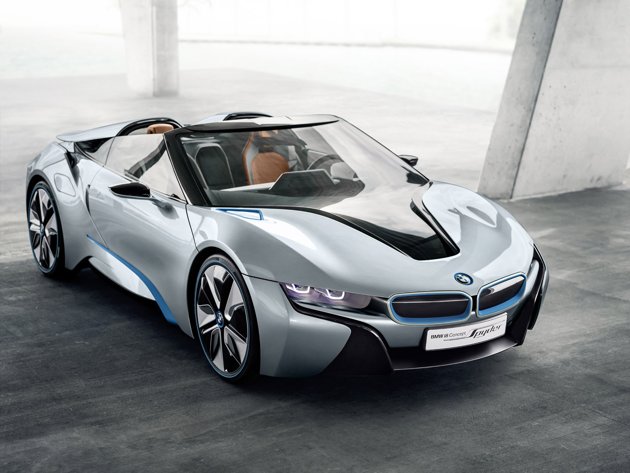 What's most stunning about the BMW i8 Concept Spyder the German automaker revealed today isn't the 350-hp plug-in hybrid technology, the laser-powered headlights or the auto-show touches such as folding electric kickboards. It's that BMW plans to build something with most of these features, in a car looking much like this, within a few years. This is not a dream.

The latest evolution of BMW i-Series concepts expected at this week's New York auto show wears an exterior that while still futuristic, represents a viable look at what BMW will build in two years. When BMW chief designer Adrian von Hooydonk told us in Detroit the production i8s would strongly resemble the concepts, this — the layered bodywork, the laser headlights and the tri-tone accents — was what he meant. Even the i8 Concept Spyder's scissor doors look less showy than purposeful here.

Like most auto show concepts, the i8 Concept Spyder moves thanks to a combination of battery and engine — namely a 96 kW electric motor tied to a 223-hp turbocharged three cylinder engine, for a total output of 354 hp. Unlike most concepts, BMW pledges hard performance targets of 0-60 mph in about five seconds, some 19 miles on electric power alone, a top speed of 155 mph and fuel economy of 94 mpg in European testing.

That kind of performance was made possible by BMW's engineering efforts around the body, mating a carbon-fiber passenger cell to aluminum subframes for the engine and battery. Doing so, BMW claims, allowed it to eliminate the extra weight a plug-in hybrid system usually carries while maintaining the 50/50 front-rear weight split for handling that BMW owners rejoice in. And BMW has programmed the system to choose front, rear or all-wheel-drive as it sees fit.

Inside, BMW's promising a welter of intelligent software advancements that would anticipate drivers' needs, such warming the batteries before departure or finding charging stations along a route. It claims the batteries can be recharged in under two hours from a standard household outlet, and while at your destination the i8 Concept Spyder has two folding electric kickboards — essentially Razor scooters with mini motors — which the automaker touts as "perfect for relaxed cruising along promenades and paths or around city squares."

Those won't make it off the auto show floor. But the rest of BMW i8 Concept Spyder appears tantalizingly close, although rumors from Europe suggest the i-Series will match their high goals with high prices, possibly above $100,000. Even then, if BMW can produce something with this performance and design, the future will have a new classic.