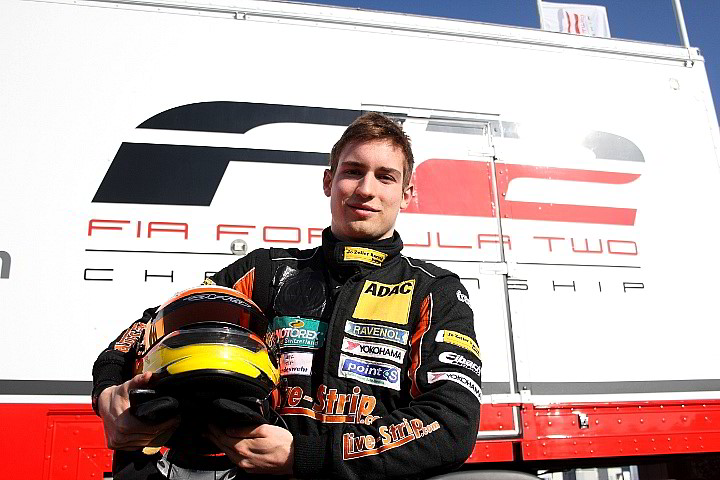 The 18 drivers were blessed with warm, spring sunshine for the test session at the 5.901km track, where the opening rounds of the season get underway in just over two weeks time (14/15 April).

Pommer was the first driver to get to grips with the new Yokohama tires and carbon brakes, with the German leading the way in both the morning sessions and lapping in the 1:48s -already two seconds up on the 2011 pre-season test times.

F2 returnees Christopher Zanella and Luciano Bacheta were also among the front runners during the morning two sessions as was Mihai Marinescu, Alex Fontana, Daniel McKenzie and McLaren Autosport Award finalist Dino Zamparelli. 2010 F2 champion made a welcome return to the series too going fifth in the second session – his first time in the car since being diagnosed with testicular cancer.

Temperatures continued to rise after the lunch interval with this time Swiss driver Fontana going quickest in session three with an impressive lap in the final few moments. However, it was Pommer who went back on top for the final session, topping three of the today’s four stints, with a best of 1:48.272s.

Speaking afterwards 21-year-old Pommer said: “The car has felt fantastic all day and we’ve hardly had to make any changes. The morning times were really good and we could have gone quicker but we didn’t want to push too hard too soon. During the third session we used worn tires and concentrated on longer, race runs which went really well and the tires didn’t drop off at all. The final overboost session was really good too and I’m feeling confident for the season ahead."

The opening rounds of the 2012 FIA Formula Two Championship take place at Silverstone on 13-15 April. For more information visit www.formulatwo.com.