The same three Pirelli World Challenge Championships drivers crossed the finish line first in this morning's second half of the Acura Sports Car Challenge of St. Petersburg doubleheader as they did in Saturday evening's season opener, but unlike last night, all three drivers took undisputed victories.

Lawson Aschenbach, of Darnestown, Md., took the GT class victory in a dominating performance, while Justin Bell, of Los Angeles, Calif., parlayed a late-race pass into a second GTS triumph and Michael Cooper, of Syosset, N.Y., dominated Touring Car for a doubleheader sweep. 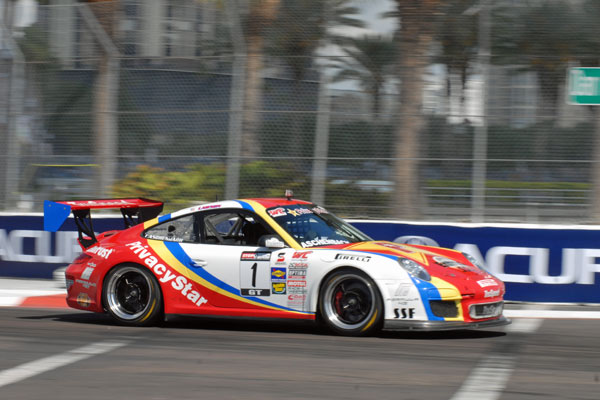 Driving the No. 1 Privacy Star/Entrust Porsche 911 GT3, Aschenbach came back with a vengeance less than 24 hours after SCCA Pro Racing stripped him of a Race 1 victory due to a pass under caution. The 2011 Touring Car and 2006 GT champion started Race 2 at St. Pete from the pole position by virtue of turning the fastest lap in Race 1, and it was clear from the standing start that Aschenbach meant business.
Aschenbach appeared to comfortably pull away from the rest of the field on the initial start, as well as on each of the 50-minute race's three restarts from full-course caution periods. He led every lap en route to a 4.591-second victory over Johnny O'Connell, of Flowery Branch, Ga. It was his sixth career victory in World Challenge competition and his third St. Pete win.
"It's a great accomplishment after what happened yesterday," said Aschenbach. "I totally understand what the series had to do. We respect that and we just have to move on. The TruSpeed guys really rallied behind us today and all our sponsors, Privacy Star and Entrust. I'm just really, really excited about the win today. It's a little bit of vindication after yesterday. We'll take it and move on to Long Beach."
O'Connell will move on to Long Beach with the early GT points lead, 265-239, over Aschenbach thanks to his second top-two run in as many days. O'Connell was the beneficiary of Aschenbach's penalty and took his second consecutive victory in the No. 3 Cadillac Racing Cadillac CTS-V on Saturday night after winning the 2011 season finale at Road Atlanta. Sunday's race was a different matter altogether. O'Connell quickly worked his way into second after starting third but he never had a shot at challenging Aschenbach this time around.
"I didn't get any run at him," O'Connell said. "I didn't allow myself to get into position to take advantage of him. I guess on that last restart, I got tagged a little bit from behind and that messed me up to try and set him up for (Turn) 3. He drove great, their car was strong, but our Cadillac was really good. The guys actually improved our start overnight, we got a better start and that helped as well.
"It really shows all the hard work that Cadillac did in the offseason. We had really good cars. I actually had a better car today. We had made some changes to it overnight to make it more nimble and it was, but the added weight that we got from winning yesterday made a difference. That is the hardest I've driven in a long time. I was just pushing so hard."
Andy Pilgrim, of Marina Del Rey, Fla., made it two Cadillacs on the Race 2 podium with a third-place run in the No. 8 Cadillac Racing CTS-V Coupe. Pilgrim was at the center of a number of wild starts and restarts but he managed to keep it clean and secure another solid result. Pilgrim finished fourth in Race 1.
"It was very wild," Pilgrim said. "The restarts were especially wild. I was hoping we'd both get top fives this weekend and get out of here, because you never know with this place. It's a street course and there's a lot of damaged equipment. It's just a street race. I'm very happy with top three today. Johnny got a great win yesterday and for me, it's always a team deal, but I'm glad to be on the podium. What can I say? It's St. Pete and we're out of here with two top fives, so I'm happy."
James Sofronas, of Newport Beach, Calif., finished fourth on Sunday in the No. 14 Global Motorsports Group Porsche 911 GT3 after what became a second-place result in Race 1. Fifth place went to Steve Ott, of Houston, Texas, in the No. 85 Racing For Our Heroes/Loctite Porsche 911 GT3.
Whereas the GT and Touring Car races were virtually open-and-shut cases, the GTS race was anything but. Peter Cunningham, of Milwaukee, Wis., started his No. 42 RealTime/Acura/HPD Acura TSX from the class pole position, and led a substantial portion of the race, just as he did on Saturday.
However, just as it went down in Race 1, Bell put together a solid second half charge in the No. 50 eBay 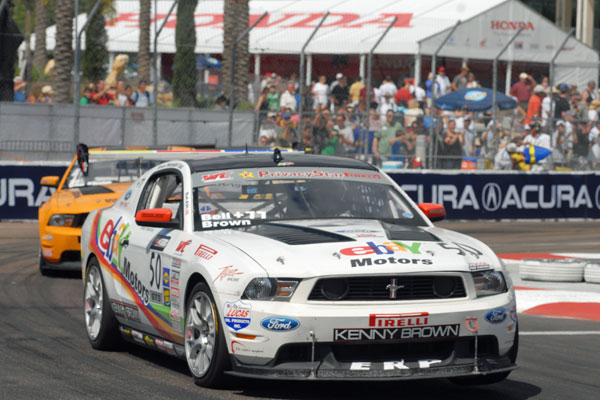 Motors Ford Mustang Boss 302S after dropping from second on the starting grid to third in the early going. Bell took second place away from Jason von Kluge, of Ann Arbor, Mich., on Lap 22 of the 29-lap race and immediately set sail after Cunningham.
Bell eventually chased Cunningham down and took the lead in Turn 1 with just two laps remaining, which earned him both the Cadillac CTS-V Move of the Race Award and the Kia Turning Point of the Race. He went on maintain his perfect record in World Challenge competition, going two-for-two as a stand-in for 2011 GTS champion Paul Brown.
"When I was in third place, I could see [Cunningham] not pulling away, so I thought, 'If I get into second, I know I can probably get him,'" Bell said. "His car didn't look very good under brakes and I thought mine might be. It took me four laps. They said, 'You've got three minutes left in the race,' and there's a big difference between going home second and going home first.
"I just had to push him and he was very fair. I went down the inside and we're both sideways coming through (Turn) 1 and I made the pass. Then I knew I could hold it. It was so much fun. You know I have to thank eBay Motors Mobile giving the faith to put me in, and Paul letting me drive his car. I might have to do Long Beach now."
Bell leads Cunningham by 35 points, 302-267, in the GTS driver standings with two of 12 class races completed. Cunningham, a nine-time SCCA Pro Racing champion, took his second straight runner-up result on Sunday.
Third place in GTS went to Andy Lee, of Colorado Springs, Colo., in the No. 20 Best IT Chevrolet Camaro. Lee got around von Kluge in the closing stages to take the final podium spot and von Kluge wound up fourth in the No. 19 Steeda Autosports Ford Mustang Boss 302S. Nick Esayian, of San Diego, Calif., took fifth in GTS in the No. 34 RealTime/Acura/HPD Acura TSX and earned the Sunoco Hard Charger Award for his 21-position improvement from start to finish. 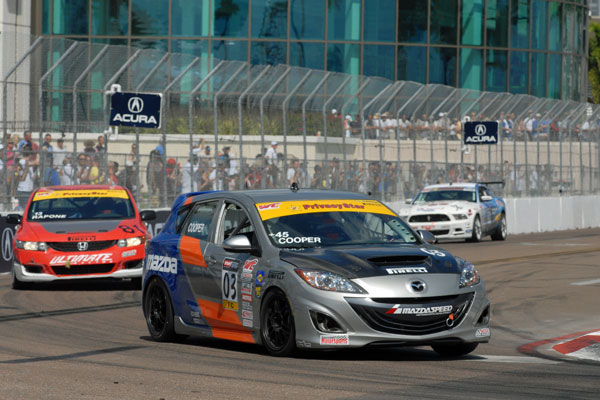