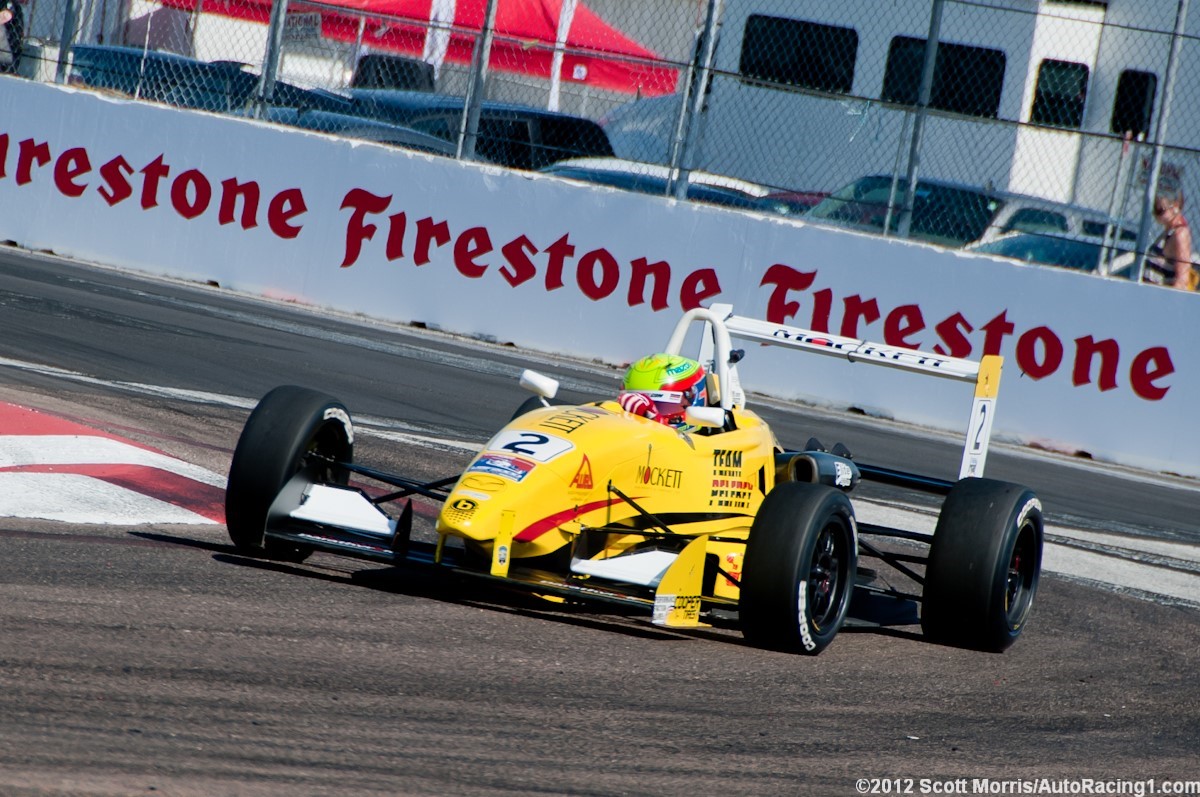 Round Three of the Cooper Tires USF2000 Championship Powered by Mazda turned into another intra-team battle as Spencer Pigot and Matthew Brabham waged a race-long duel throughout the first of this weekend’s USF2000 Grand Prix of St. Petersburg Presented by Allied Building Products.

The pair of 18-year-olds, both of whom drive for St. Petersburg, Fla.-based Cape Motorsports with Wayne Taylor Racing, finished as they started after an intense 30 minutes of racing with only one brief caution period, with Pigot taking a narrow victory to close within two points of Brabham in the championship standings.

Pigot held the lead throughout the 21-lap contest, but Brabham never gave up the chase. Pigot, from Orlando, Fla., managed to eke out a slight advantage by the midway point in the race, only for the gap to be erased by a full-course caution after Scott Hargrove, from Surrey, B.C., Canada, hit the wall in Turn 10 while running eighth for JDC MotorSports.

Brabham, from Boca Raton, put Pigot under intense pressure at the restart, but Pigot doggedly maintained his position at the front to claim his second win of the season. Brabham had the consolation of posting the fastest lap of the race – thereby ensuring the coveted pole position for tomorrow’s morning’s race.

Neil Alberico (JDC MotorSports), from Los Gatos, Calif., and Matthew Di Leo (MDL Racing), from Innisfil, Ont., Canada, fought an equally intense battle for third place, only to collide on the final lap in Turn Four and gift the position to Belardi Auto Racing’s Roman Lagudi, from Las Vegas, Nev., who thereby claimed his third podium finish in as many races this season.

National Class honors were claimed by RC Enerson, from nearby New Port Richey, Fla., driving for ZSports Midwest with Team E Racing. Enerson chased fellow 15-year-old Henrik Furuseth (Cape Motorsports with Wayne Taylor Racing) in the early stages before finding a way past on Lap 8 to finish in ninth position overall among the 34-car field.

Contingency awards included the Tilton Hard Charger Award, for the driver who gained the most positions during the race, which was claimed by St. Petersburg resident Shannon McIntosh, who started 25th but worked her way impressively to 11th in the Pabst Racing Services #18 TrueCar/CrossFit9/Anytime Fitness St. Pete Van Diemen-Mazda; the PFC Awards for the winning car owners, which were issued to Cape Motorsports with Wayne Taylor Racing in the Championship Class and ZSports Midwest with Team E Racing in the National class; and the Staubli Award, a random finisher award, which was presented to Heamin Choi, from Seoul, Korea, who had a fine drive from 17th on the grid to 10th for Afterburner Autosport.

Spencer Pigot, #2 Team Pelfrey/Doug Mockett & Company/E-merging Technologies/ Parathyroid.com (Cape Motorsports with Wayne Taylor Racing) – First: “It was great to get the win in Race 1 at St. Petersburg. It was a difficult race in the beginning and towards the end. The middle section was pretty good. I was able to get through the traffic cleanly and stretch the gap a little bit to Matt [Brabham]. After the yellow, we were close but I was able to hold him off for the win so I am happy about that. It’s my second win of the year and I’m looking forward to tomorrow and trying to do it again."

Matthew Brabham, #83 DTE Group (Cape Motorsports with Wayne Taylor Racing) – Second: “It was very, very intense out there and it was kind of like a rubber band effect between me and Spencer [Pigot]. We both had a really good start and managed to pull a gap together and pull away and dice between ourselves for most of the race. The track was getting worse and worse as it started to heat up and grease up, and it was very intense for awhile there. When the yellow flag came out, it gave me a chance to get back at Spencer going into Turn One, but he defended well and I couldn’t really quite make it around the outside. Other than that, I am really pleased with how it all went. I learned the track quickly and was up to speed pretty quickly with Spencer, so it has all worked out very well."

Roman Lagudi, #4 Champion Stone/Tool and Supply/High Performance Distributors (Belardi Auto Racing) – Third: “It was a great race. Starting seventh, I was trying to do a good points race and the start here is very key. I was trying to play it safe and came out in fifth or something like that. When the yellow flag came out, I knew I was going to have some pressure from behind me so I decided to play it safe and stick to the game plan. When the two cars in front of me crashed on the last lap, I was able to get a third podium in the third race. I have to thank Brian Belardi, Belardi Auto Racing, my dad, my driver coach Rod MacLeod, and Lou and Joe D’Agostino for all their hard work."

RC Enerson, #10 Patriot Bank/Team E (ZSports Midwest with Team E Racing – First National Class: “I started behind Scott [Rettich, National pole sitter] and he was caught up in the incident at Turn Two. I had a really hard time chasing down Henrik [Furuseth]. He made a really good run on me at the start and then I basically had to catch, catch, catch. He is a good driver and I had to work to try to catch him. He got stuck behind lapped traffic and I was able to get around both going into Turn Four and opened a gap for as long as I could. When the yellow came out, I managed to keep him behind and had to open up the gap until the checkered."