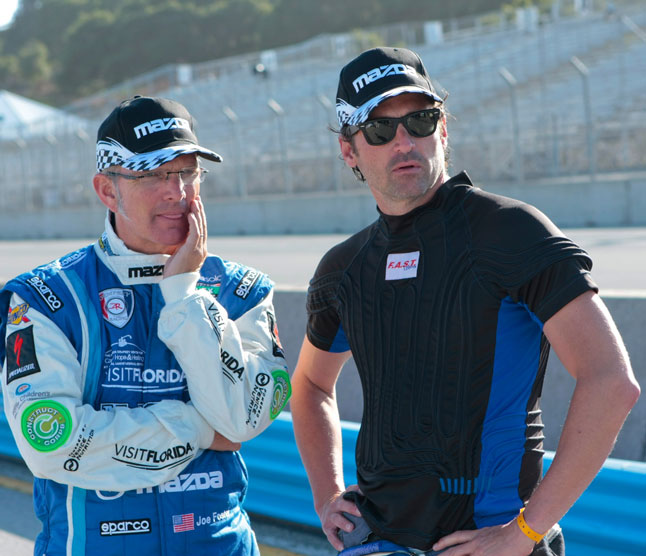 Dempsey Racing principals and co-drivers Patrick Dempsey and Joe Foster confirmed today the team’s entry into the American Le Mans Series (ALMS) P2 division with a partial schedule of races this year, fulltime competition in future seasons, and a return to the 24 Hours of Le Mans, possibly as soon as 2013.

The announcement was made in a press conference at the 60th Annual Mobil 1 Twelve Hours of Sebring fueled by Fresh from Florida where Dempsey and Foster were joined by Silicon Tech Racing (STR) principal Henri Richard and their teammates Duncan Ende and Dane Cameron. Richard, Ende and Cameron are co-driving in this weekend’s Sebring event in the Silicon Tech/Dempsey Racing No. 025 Future Electronics/HP/STANDD/Pounce Consulting/Racer’s Roast Oreca FLM09 in the Prototype Challenge (PC) division. The race marks the worldwide debut of Dempsey Racing in prototype sports car competition with the expansion to the P2 class scheduled to start within the next few ALMS events.

“We’re excited to compete for the first time at Sebring, with our STR partners, as well as take the additional step of an eventual entry into the P2 field," Dempsey said. “It’s no secret that I really enjoyed my experience at Le Mans in 2009, and would love to go back with our own effort. We have a history of taking things one step at a time, and this is just the next step toward that goal."

Dempsey Racing’s move to P2 comes with the support of longtime team partner Mazda, Richard and STR, second-year sponsor Trina Solar and new partners GNC Beverages and Motegi Racing Wheels. Dempsey Racing has also entered into an agreement with Michelin to supply tires for the team’s P2 entry in its debut season of competition this year. Additional partners for the P2 effort will be announced in the near future.

“Our long-term partner Mazda has been analyzing ways to demonstrate its SKYACTIV Technology within the ACO rules format, and we as a team would like to be ready if such an opportunity arises," Foster said. “In the meantime, we are very excited about partnering with Trina Solar, GNC Beverages and Motegi Racing for our initial foray into the P2 ranks."

The team will be acquiring a Judd-powered Lola B12-80 Coupe in the next few weeks and will begin a testing program prior to its ALMS race debut later this season. With its entry into both P2 and PC in 2012, this season will the biggest year of operation in the history of Dempsey Racing.

“The team has had an amazing progression in its partnerships and ability to provide value," Dempsey said. “We are working hard on putting together additional partners to help get us back to Le Mans but also being able to compete at fantastic venues like Sebring, Daytona, Indianapolis, Road Atlanta and others will make this season a thrill for me as a driver as well as team owner."

The 2012 American Le Mans Series presented by Tequila PatrÂ¢n begins with the 60th Anniversary Mobil 1 Twelve Hours of Sebring Fueled by Fresh from Florida on Saturday on March 17. The race, set for 10:30 a.m. ET, will be broadcast at noon March 18 on ABC and shown live on ESPN3.