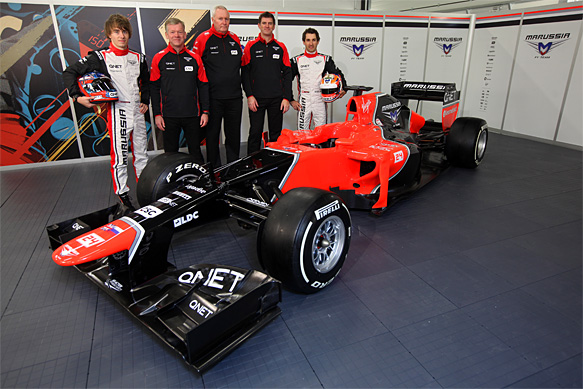 The Marussia F1 Team is delighted to be heading to Melbourne for this weekend’s 2012 Formula 1 Qantas Australian Grand Prix and the start of a brand new season, the team’s third year of F1 competition.

Melbourne is a fantastic place to get things started. It’s a lively, cosmopolitan city that simply loves seeing Formula One roll into town every year. The feeling is mutual. Formula One loves Melbourne and the teams always receive an incredibly warm reception from the country’s legions of motorsport fans. Being the season-opener and in relatively close proximity to the Far East, this race also sees its fair share of fans from Asia – and there are many – making the trip to soak up the excitement.

Where we’ve been to…

It’s been an arduous winter for the Marussia F1 Team but the whole team is now relishing the opportunity to get back on track, in every sense, as John Booth tells us:

“It has been a tough time for everyone but it is situations like this that really test the mettle of a team. The early years were always going to be tough for us but I have never had any doubts about the ability of our people to ride whatever storm comes our way. It is that faith rewarded that sees us heading out to Melbourne in a rather more orderly fashion than you might expect. The journey is just a breather of course and when we get there, we will no doubt face a challenging time building up to the race. We have not had the track time we’d hoped for with the MR01 and therefore the time it takes to iron out the teething problems that are to be expected with a new car. We take some heart from a relatively straightforward roll-out during two days of promotional running last week but we have yet to run on the Pirelli P-Zero performance tires and really glimpse the first signs of the potential of the package. Nonetheless, we’re heading in the right direction again and I’d like to take this opportunity to thank every single member of our team, and our partners, for all their support and efforts. It is over to us now to do the best job possible in these first few races."

Timo Glock hasn’t spent anything like the time in the new car that he would have liked. So what has he been doing over the winter months?

“I couldn’t wait to try the MR01 for the first time last Monday. Even though it wasn’t in representative conditions, it has been a long wait to get my hands on a car that I’m hoping will be a good step forward from the past two seasons. It has been a frustrating winter for sure, but you have two choices and the only thing to do was to focus on everything we could be doing off-track to make sure we were as prepared as possible for when we did run the car. I’ve done a lot of work in the simulator and with the team in Banbury and in terms of my personal fitness I have been training harder than ever before. Melbourne will be a bit of a voyage into the unknown but we have nothing to lose and I’m even more excited than usual to see how the car feels in Friday’s first free practice. Albert Park is a great track and I love going there for the first race of the season. I would rather be going there with more preparation but we will do the best we can and see where we are."

The Australian Grand Prix is Charles Pic’s debut grand prix and very first visit to Melbourne. Nonetheless, he seems to be taking everything in his stride as he makes the journey ‘down under’ this week:

“I’m ready to go racing now. I have been working very hard physically and with the team, and mentally I am prepared. It is true I would have preferred to have more track time before my first Grand Prix but I have been working on the simulator so we will do the best we can. Australia will be very special for sure and I will have a lot of support around me. I’m looking forward to getting into the routine of a race weekend and continuing to build the relationship with my engineers. The team have been a great support for me so I know I can count on them. It’s my first visit to Melbourne but I have heard very good things about the track and the city. Obviously I have driven Albert Park a few times in simulation now but I can’t wait for the real thing."