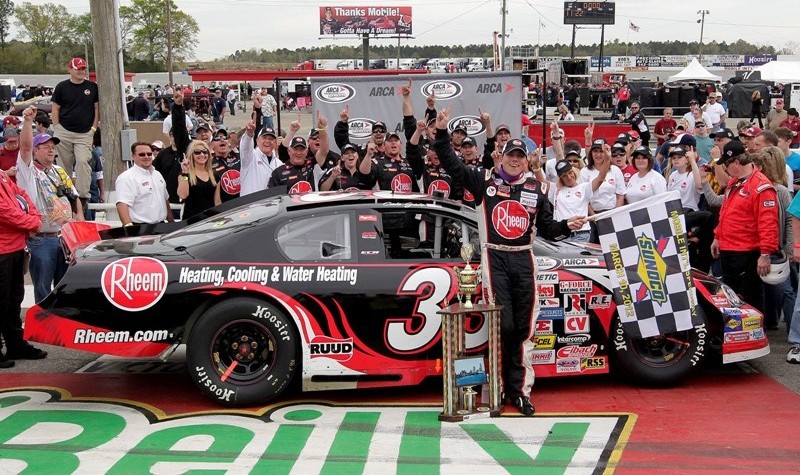 Cale Gale, the 27-year-old from Mobile, Ala., returned to his home town this week for the "Thank You Mobile" tour and brought home the race win in a green-white-checkered finish in front of his lifelong fans and supporters at Mobile International Speedway. After spending the week with his fans, Gale returned to the track where he was the first driver to win both the track championship and the rookie of the year title ten years ago, to become the first driver to win an ARCA Racing Series event.

Gale proved that he was going to be a force to be reckoned with throughout practice and qualifying at the half-mile speedway in southern Alabama. He was ranked inside the top-two competitors for most of the four-hour practice session, but fell to eighth-place as other drivers made qualifying runs. The driver of the No. 33 Rheem Chevrolet laid down a 17.828-second lap to secure the ninth starting position for Saturday afternoon's race.

As soon as the green flag fell, Gale began passing cars and working his way through the field. Crew chief Jerry Baxter had planned a two-stop race due to tire wear, but needed to time each stop just right to allow Gale the best opportunity to work back through the field. With Gale in the second position tailing Chase Elliott for over 20 laps, the No. 33 Rheem Chevrolet came down pit road just behind Elliott for their first pit stops during the lap 48 caution period. With the challenge of a "backwards" pit stop, the Rheem team laid down a flawless four-tire stop and got Gale back on track in front of Elliott.

Gale took over the lead on lap 80 and continued to set the pace around the half-mile oval until lap 133 when the Rheem Chevrolet got held up in traffic and Grant Enfinger, another local, passed Gale for the lead.

Gale stayed focused on hitting his marks and slowly chased down Enfinger waiting to make his move. During the lap 167 caution, Gale confidently came over his team's radio telling them to get ready for the "Saturday night feature between Grant Enfinger and Cale Gale at Mobile International Speedway."

During the same caution, Gale stopped on pit road for his final set of tires. Another flawless four-tire stop by the Rheem team placed them second only to Enfinger, who took two fresh Hoosier tires during the stop. Less than 10 laps later, Gale drew speed coming off of turn two and drove past Enfinger on the backstretch to regain the lead. From there, Gale had to perfectly time four restarts to keep his competition behind him en route to the checkered flag.

In front of a crowd filled with his family, friends, and hometown supporters, Gale crossed the finish line first on a green-white-checkered finish to win the inaugural Mobile ARCA 200 at Mobile International Speedway.

"I need to thank everyone at Rheem and Eddie Sharp Racing for putting together this opportunity," commented Cale Gale following his win. "What we've done this week has been a lot of fun–our tour of Mobile, hosting the Boys & Girls Club, and going back to my high school has all been really cool. To be able to come out here and win at my home track means a lot; we had a lot of fun. We had a great car. It's been awhile since I've won, so to be able to pull off a win is definitely what I needed for my confidence. We'll go to Martinsville in a couple weeks with the NASCAR Camping World Truck Series and have another good run there."