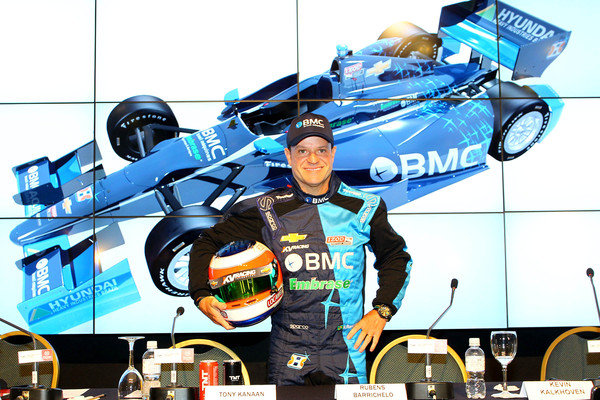 UPDATE Added photo of Rubens Barrichello showing his BMC sponsor livery. Barrichello's deal was confirmed as just one year for now, but Rubens says if all goes well he will be back for more in 2013.

Now Barrichello will embark on a new chapter in his racing career.

"I am thrilled, it is something very new to me," said Barrichello, who has tested the new Dallara car powered by Chevrolet at Sebring International Raceway and Infineon Raceway in the past month. "I need to thank everyone involved, especially (new teammate) Tony (Kanaan) because he has been involved for a long time. I would also like to thank my sponsors, BMC, Embrase and Locaweb for their help. This is a new experience, but I am very happy. With all my experience I will start as a rookie, but I think I will get better as the year progresses.

"My main thing is to be an addition to KV Racing Technology. They have been doing very well and Tony brought the team to a different level last year, so I hope with my contribution we can build on this and take the team to another level. I am extremely happy and have a big smile on my face."

"We are very excited to have both Rubens and Tony competing for our team in 2012," team co-owner Jimmy Vasser said. "Rubens is going to be a great addition and last year Tony once again demonstrated his leadership abilities and his proven ability to compete for wins and the championship. The addition of Rubens and the return of Tony along with E.J. (Viso) gives KVRT a very strong driver lineup and one I am sure can compete for podium finishes and race wins."

Kanaan, 37, and Barrichello are countrymen and longtime friends. It was at Kanaan's invitation that Barrichello tested the next-generation IZOD IndyCar Series car at Sebring.

"I am very excited to be returning to KV Racing Technology not only with a two-year deal but also to have Rubens Barrichello as my teammate," Kanaan said. "We have always dreamed about racing together but never imagined it would actually happen and certainly not in the near future or in IndyCars.

"I have a guy who has 19 years of experience in Formula One; one of the best drivers I've ever seen as a teammate that I can learn a lot and he can learn a lot from me racing on the ovals in the series. For the series it's huge.

"We're getting a guy who has the most grand prix races completed in history. For him, he is in a series where he can win races and not be just part of a field because the equipment is not capable of winning. So I am looking forward to the start of the season. I think it's going to be a very exciting year."

"It's an exciting day for the IZOD IndyCar Series and a positive step to start 2012," Bernard said. "We've said all along that one of the most important factors that will make the IZOD IndyCar Series successful is having the best drivers in the world, and there's not a person in the world who knows racing that wouldn't tell you that Rubens Barrichello is one of the greatest drivers of all time. I think it's been interesting to hear the response of the other drivers. It's been 'This is great for us because it will show how good all of our drivers are.'

"That, to me, is important because the best in the IZOD IndyCar Series are saying 'Bring him on. We want this guy.' That will create great competition and expands our international platform. There will be millions of fans that will want to see what Barrichello can do. The other factor, which we saw last weekend at Infineon Raceway as he talked with fans attending the Chevy test, is that he's such a great guy. That will resonate with our fans."

Four-time IZOD IndyCar Series champion Dario Franchitti, who first crossed paths with Barrichello in 1987 in European karting competition, said Barrichello increases the depth of the field competing on the most diverse set of racetracks in motorsports.

"It's only a positive. He ups the level of competition in the field yet again," said Franchitti, who will join 25 other IZOD IndyCar Series drivers for an Open Test next week at Sebring International Raceway. "Besides the guys we know already who are tough to beat, he'd add another major name to have to fight against."