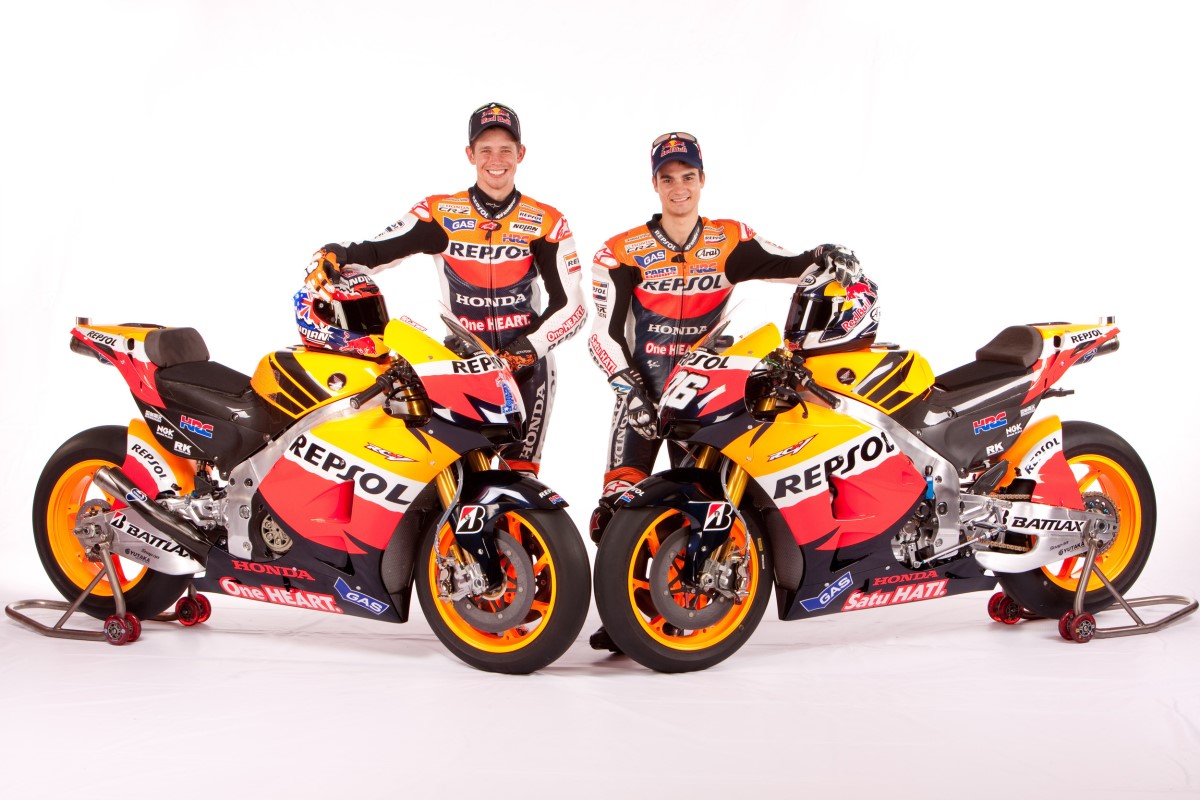 The Repsol Honda Team, 2011 Triple Crown Champions, hosted the media at a Team Presentation in the Pan Pacific Hotel in Kuala Lumpur tonight with a press conference and welcome party.

After the winter break, team riders Casey Stoner and Dani Pedrosa returned to the media spotlight refreshed and eager to start the new season. Alongside them were HRC team bosses, Shuhei Nakamoto (HRC Executive Vice President), Hideki Iwano (Director, Assistant to Team Principal), Shinichi Kokubu (Technical Director) and Livio Suppo (Communications and Marketing Director). This was also the first opportunity for the media to see the new RC213V bike complete with 2011 World Champion, Casey Stoner's number '1' emblazoned on the front.

The team arrived in Malaysia on Saturday and returned to the Sepang track on Sunday for the first time since Marco Simoncelli's tragic accident in the race on 23rd October. As a mark of respect, the whole team visited the corner where Marco lost his life, laid a wreath of flowers and held a minutes silence.

This season the MotoGP world returns to 1000cc bikes and HRC head into the 2012 season determined to retain the World Championship.

"The off season has been really good, we got to go back home and spend some time with family and friends in Australia over Christmas which was great. Then we came back to Switzerland to get everything in order for the baby's arrival, Adriana's due in just a few weeks and so we've been preparing, as best possible! After such a strong season in 2011, we remain focused and don't expect to be in top form immediately. I am sure Honda have done a fantastic job with the new 1000cc machine over the winter break and I'm really looking forward to getting back on the bike and seeing what we can do, hoping to start strong again. We know there will be a lot of serious competition out there, Ducati have been putting a lot of effort in as have Yamaha so it will be interesting to get out on track and see what everyone's got. However, it's early days and I think we'll have to wait until the race in Qatar before we really know our competitors true pace and the package they have for 2012, but we're ready for it".

"It's nice to be back with the team for the first Sepang test. I'm really excited to get on the bike again after the test we did in Valencia in November. Sepang is a good track for testing and we have still many things to discover out about the new bike. It's been a long time since we were last riding and at the first test it's always important to get the feeling back, the first sensations. We will have three long days here to work with the team and HRC and it's necessary to be very focused in order to get good information to move forward for the second test. I guess the main target in this test will be to know the bike and the new Bridgestone tires".

"We start this new 2012 season with a clear target: to work stronger than ever to defend our MotoGP World titles in this new 1000cc category. We finished the 800cc era winning the triple crown and we will fight to win this again in 2012. We fully trust in our riders Casey Stoner and Dani Pedrosa to deliver this big challenge and we will give them all our technical and human support. The RC213V is an evolution of the last version of the RC212V based on the same concept. The machines we have brought here to Sepang are basically the same machines we tested in Valencia back in November with only a few differences. In fact, Casey and Dani will have one machine the same as Valencia, and the other one with a slightly different chassis, based on their own requests. This is the first time back to Sepang since we lost Marco Simoncelli last October, on Sunday we visited the scene of his accident and laid some flowers and said a final 'Ciao' to him. I believe by starting this season strong will be a fitting tribute to Marco".