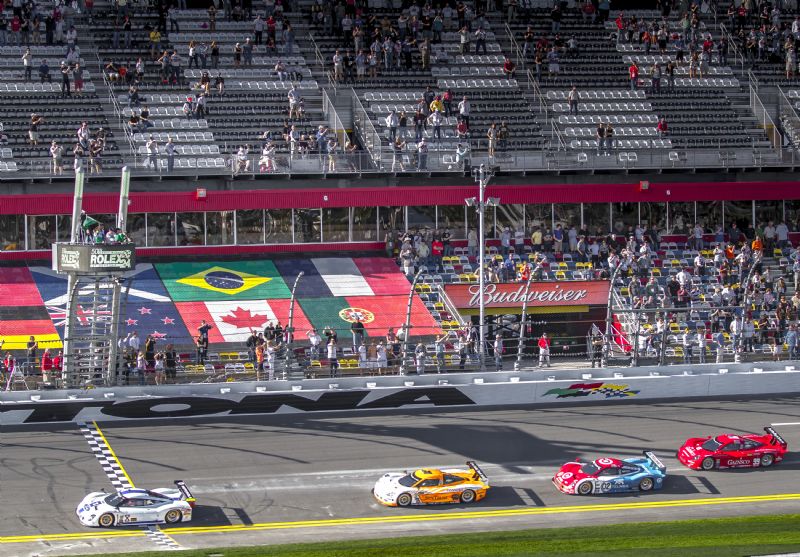 As the 50th anniversary of 24 hours of racing at Daytona International Speedway came to a close Sunday afternoon, fans, drivers and officials praised what everyone called a successful weekend.

Between the competition, the activities and the attendance, several interviewed Sunday said the Rolex seemed bigger and better than ever.

"Listen to everybody. By any estimate, it's one of the best Rolex 24's ever," said Herb Branham, managing director of communications for Grand-Am Road Racing. "We're overjoyed."

Race fan Brad Carter of Ormond Beach said it was a "great" race with more teams and more drivers. As he watched the final laps of the race from the FanZone, he said: "I think the local economy has benefited this weekend."

This was the second Rolex for fan Tom Blake of Fort Lauderdale. He said this Rolex seemed much bigger than when he his first Rolex in 2010.

Michael DeFontes, driver of the No. 34 Porsche 997, which had a gearbox go out Sunday morning, relaxed in the FanZone concession area during the final laps of the race.

He was one of many drivers talking about the increase in the number of cars this year, but he was also impressed with what appeared to be an increase in attendance. Both subjects generated a lot of buzz around the Speedway over the weekend.

Many wondered if — or hoped — the increased crowds and competition for the 50th anniversary celebration would carry over to the rest of the Grand-Am Road Racing series and to future years of the Rolex.

"This is an indication of how big Grand-Am is going to become," DeFontes said.

"This was really about the future of Grand-Am racing," he said. "And a big part of that is the synergy and support from NASCAR."

Of the 170 media outlets with credentials for the Speedway over the weekend, 95 were from international media outlets, said Speedway spokesman Andrew Booth.

As Branham listened to the international languages spoken around the track by reporters and teams, he said he couldn't stop thinking about NASCAR founder Bill France, Sr., who built the Speedway.

"He really wanted this place to have an international reputation," Branham said. "This 50th anniversary was such a big event that maybe more than ever this has fulfilled the original vision he had."

Just after the race concluded, Speedway President Joie Chitwood said he was "ecstatic."

"Whether it was the competition on the track, or the experience for the fans or the heritage of the 50th with all the historic cars, it seemed that everything that happened this year was spot-on perfect," Chitwood said. "It was a culmination of a lot of factors and you can't discount how perfect the weather was yesterday and today."

But, he was already focused in the future, on two things specifically, plans for the 500 and "how are we going to top this next year for the 51st?" Daytona Beach News Journal