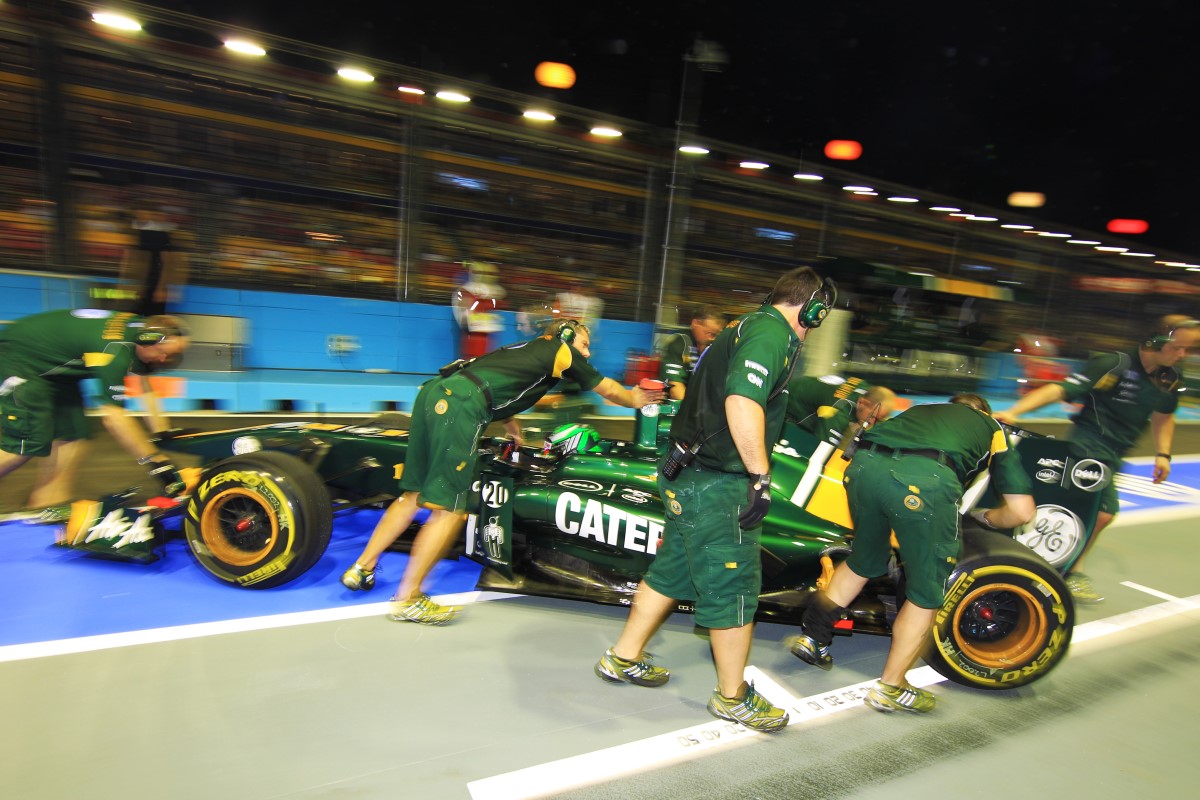 Writing in Turun Sanomat newspaper, Finnish correspondent Heikki Kulta said the former Renault team did not even intend to run the innovative concept in 2012.

The FIA pre-empted the teams' race to implement the systems when it emerged that Ferrari, Mercedes and possibly Red Bull were already rushing to emulate the Lotus concept.

Before the governing body's decision to ban it, Lotus gave the system its debut at the Abu Dhabi young drivers' test late last year.

But Kulta claims the team was not ready to give it a race debut "because it did not work properly".

Ecclestone to meet France GP officials on Monday
(GMM) A meeting on Monday could signal another step towards France's return to the formula one calendar.

Bernie Ecclestone is scheduled to meet in his London office with David Douillet, the French sports minister, and Nicolas Deschaux, the president of the country's sanctioning body FFSA.

Also present, according to the Le Journal du dimanche newspaper, will be Gilles Dufeigneux, who last year was appointed directly by French prime minister Francois Fillon to lead efforts to arrange the race's comeback.

As well as being responsible for the annual F1 calendar, Ecclestone co-owns Paul Ricard.

Heidfeld set for Le Mans in 2012
(GMM) Nick Heidfeld is set to continue his motor racing career in 2012.

But after twelve seasons and 183 grands prix, having replaced the injured Robert Kubica at Renault in the first half of 2011, the 34-year-old's F1 career appears to be over.

His program in the Lola prototype car will reportedly include the fabled 24 hour Le Mans race, as well as Spa and Sebring.

Pirelli denies favoring Ferrari in F1
(GMM) Pirelli has denied it works too closely in formula one with fellow Italian marque Ferrari.

The question was put to him after Pirelli decided to soften the hardest compounds of its tires ahead of the 2012 season.

"It was a choice we made in accordance with all the teams and drivers," insisted Tronchetti Provera.

He admitted however to wanting to see Ferrari succeed.

"Naturally. If you're Italian your dream is for Ferrari to win, if you're English then it is McLaren. Everyone's heart is where it is."

And with Europe in crisis, a Pirelli-shod Ferrari victory would be meaningful for Italy.

"There are Italian companies with the right approach in terms of competitiveness, technology, quality of the people.

"They can offer a great contribution to restoring confidence in the country," he admitted.

During his conversation with reporters, Tronchetti Provera answered his phone.

"Luchino!" he beamed, admitting the call was from Ferrari president Luca di Montezemolo.

"Now everybody is going to say I have a special relationship with Ferrari," he laughed, before pausing: "He (Montezemolo) says it isn't true!"

Tronchetti Provera also insisted he would be happy to see a tire war in F1.

"Alone or with a competitor, it's ok either way," he said. "F1 decided that the tires should be the same for everyone, but we do not care."

After the grand final in Super Besse, the 1997 world champion accused the organizers of breaking their own rules to help Alain Prost, according to RMC.

The report said F1's quadruple world champion Prost was allowed to have his car repaired after a crash.

"We realized we were not participating in the Andros trophy but the Alain Prost trophy," French Canadian Villeneuve said.

"I question my commitment because of that. This was not sport," he charged.

Sutil to appear as assault trial begins
(GMM) Adrian Sutil is due to appear in court on Monday morning.

The former Force India driver's two-day trial, over the alleged assault of Lotus team executive Eric Lux, is set to begin in Munich.

Reports allege Lux was cut on the neck with a broken champagne glass after attempting to eject the German from a private VIP room at the M1nt nightclub in Shanghai last April.

The report said HRT driver and former McLaren tester Pedro de la Rosa was also nearby at the time of the incident, but the Spaniard insists he did not see anything.

Bild said the incident was captured by a low-quality, black and white ceiling security camera.

The report said the footage depicts Sutil sitting on a couch alongside McLaren driver Lewis Hamilton before he was approached by Lux.

Hamilton will not be present on Monday, ahead of this week's launch of the 2012 McLaren.

Bild am Sonntag said Sutil has not been able to contact his friend in recent weeks.

The Bundesliga team FC Koln (Cologne) is looking for a new president and the news agency DAPD recently said Schumacher's name had been put forward.

Late last week, Schumacher's former rival Gerhard Berger tipped the 43-year-old to quit F1 at the end of this season because "he can't beat a young driver at (teammate Nico) Rosberg's level".

The next day, the Mercedes driver watched Cologne play Schalke, even visiting the club's private area at the stadium.

So is there any truth to the rumors?

"It's known that Michael has been a Cologne fan for many years. That doesn't mean he wants to be the president.

"His 100 per cent priority is his job with Mercedes in formula one," insisted manager and spokeswoman Sabine Kehm.

That is the claim of fellow Indian billionaire Dr Vijay Mallya, who with title sponsor Sahara's Roy co-owns the team.

Mallya bought the former Jordan team some years ago when it was known as Spyker and finishing grands prix in last place.

"The Indian people are proud that we have been able to create a team for the country to play an important role in formula one. Without our success we have attracted a larger group of supporters," he told Auto Motor und Sport.

"Now it's getting difficult to meet the demands," Mallya told the German magazine, after Force India finished the 2011 season sixth behind Renault and the four top teams.

"The people of India expect us to beat Mercedes now," he admitted.

If Force India can do that, is the sort of success achieved by Red Bull – another non-carmaker team – a realistic target?

"Why not?" answered Mallya. "Subrata Roy's vision is to be as good as Red Bull but he's so excited that I have to stop him a bit.

"There are no short-cuts in formula one."

Whitmarsh denies tension between top teams
Martin Whitmarsh, McLaren Team Principal and Chairman of the Formula One Teams Association (FOTA), has denied any tension with fellow leading teams such as Red Bull and Ferrari – both of which have now departed the group.

Off-track pressures amongst the top teams were upped during the 2011 season, not least after the blown-diffuser debacle which reached its pinnacle at Silverstone. In the second half of the year, several outfits accused World Champions Red Bull of disrespecting the Resource Restriction Agreement (RRA).

“FOTA has achieved a great deal in its short history and it’s still achieving a great deal now," Whitmarsh told the official F1 website. “It would never have come into existence without the staunch support of both Red Bull and Ferrari in its early days, and indeed (Ferrari President) Luca di Montezemolo was its first Chairman. Moreover, relations between McLaren, Red Bull and Ferrari remain very good indeed."

When asked directly if inter-team affairs are strained, Whitmarsh replied:

“Ferrari and McLaren have never enjoyed such cordial relations as they do currently. Okay, Formula 1 teams will always be competitive with one another – that’s natural and it’s the way things should be. Formula 1 is a sport, but it’s also a business – and a serious business at that. But that doesn’t mean we can’t and shouldn’t collaborate when collaborating can confer an overall benefit for the majority and that applies to all the teams, even those who are currently outside FOTA.

“So, speaking for McLaren, I can confirm that, at every level and in every discipline – engineering, marketing, PR, commercial, financial, legal and so on – our people remain in frequent and on-going contact with their counterparts within Red Bull and Ferrari, as well as with their counterparts within all the other teams…and certainly that applies to (Red Bull Team Principal) Christian Horner, (Ferrari Team Principal) Stefano Domenicali and myself."

Following the FOTA departures of Red Bull and Ferrari in December 2011, Ferrari customer team Sauber also withdrew from the alliance.

Ferrari to assist Kubica's comeback
Rumours of Robert Kubica's potential move to Ferrari – should he return to F1 – refuse to die down with the latest reports claiming Ferrari will aid his comeback.

Kubica has been sidelined since his a rally accident last February when he suffered broken bones on the right side of his body and an almost severed right hand.

And despite a minor setback, the result of a slip and fall on ice earlier this month, the Pole's recovery is reportedly progressing well.

According to Italian publication Omnicorse, Kubica is back driving using a Renault Megane with an automatic transmission.

He has a good range of movement is his right arm – 'flexing and extending of the right arm are already back to normal' – but there are still problems with rotation movements.

But, with his 'five hours a day' in physiotherapy, the 27-year-old is on the road to recovery and aiming to climb into a simulator in the not-too-distant future.

After that, the goal is a Formula One car, which is where Ferrari are believed to be entering the picture.

The Pole, who has reportedly signed a letter of intent with the Italian stable for the 2013 season, will, according to Omnicorse, get behind the wheel of a Ferrari F10 in June if everything goes according to plan.

The car, which will be fitted with the new turbocharged 1.6-liter V6 engine that will be introduced in 2014, will be outside the test ban regulations, allowing Kubica to put in the miles.

This will give the Pole the opportunity to evaluate his progress without too much pressure. And it could pave the way towards a comeback with Ferrari.