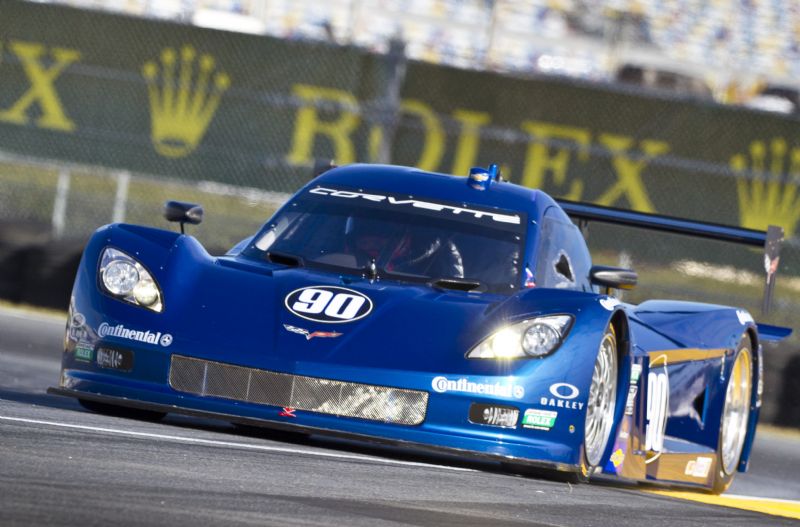 It's still anyone's race six hours into the 50th Anniversary Rolex 24 At Daytona.

At the one-quarter mark of the 2012 GRAND-AM Rolex Series opener, Oliver Gavin held the lead, with his No. 90 Spirit of Daytona Corvette Daytona Prototype, one of eight cars to hold the lead. Alex Gurney was running second in the No. 99 GAINSCO Auto Insurance Corvette DP, with Joey Hand third in the defending race-winning No. 01 TELMEX/Target BMW/Riley. Ten cars were still running on the lead lap.

Points will also be awarded on a 5-4-3-2 basis at the 12- and 18-hour marks and the finish. The series continues in the Sahlen's Six Hours of The Glen on July 1, and concludes with the Super Weekend at the Brickyard on July 27 at Indianapolis Motor Speedway.

Ronnie Bremer led the 44-car GT field in the No. 57 Stevenson Auto Group Chevrolet Camaro, followed by Richard Leitz in the No. 44 Magnus Porsche GT3 and Cooper MacNeil in the No. 23 WeatherTech Porsche GT3.

That gave Bremer and teammates Robin Liddell and John Edwards five points in the North American Endurance Championship presented by VISITFLORIDA.com. They are followed by Leitz, Andy Lally, Mike Rockenfeller and Rene Rast, four points; MacNeil, Leitzinger, Collard and Marco Holzer, three points; and the rest of the field with two points.

The biggest news of the race so far was the retirement of the No. 10 SunTrust Corvette DP started by Max Angelelli in the opening hour. Angelelli managed to meet the 30-minute requirement to earn DP championship points for himself and regular co-driver Ricky Taylor.