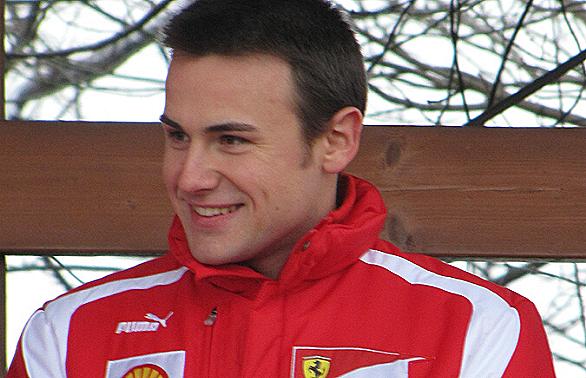 Davide Rigon has renewed his contract that ties him to Ferrari F1. Busy in the simulator, Davide will be available to the Maranello team for all F1 race-meetings as well as commercial activities in 2012 and 2013. Currently Davide Rigon is in the Canary Islands together with Fernando Alonso, Felipe Massa and Jules Bianchi in physical training.

"To have renewed the contract with the team most important to F1 is a great satisfaction and an extra boost for my future, besides making me forget 2011 as suffered a lot. All the time Ferrari was very close in these difficult times and for this I thank them heartily. I will work to the maximum possible to give more guidance and help in the development of the new car. I am honored to be part of the great Ferrari family" said Davide Rigon.

German Hulkenberg, the official reserve and 'Friday' practice driver last year, has moved into a race seat with the Silverstone based team.

Frenchman Bianchi, a GP2 driver last year, will now sit on the sidelines at Force India in 2012.

"For sure we want to invest (in Bianchi) because we believe in him," Ferrari team boss Stefano Domenicali said late last season.

Force India said on Friday Bianchi, to make his test debut with the team next month, will also practice "in a minimum of nine Friday practice sessions" this season.

"I hope it (the new role) will put me in a strong position to one day move into a race seat," he said.

Bianchi, along with Fernando Alonso, Felipe Massa and his 2012 successor Davide Rigon, is currently attending a Ferrari fitness camp in the Canary islands.

"Jules will still be part of the Ferrari driver academy," confirmed the Maranello based team.

Ferrari added that Italian GP2 driver Rigon, 25, "has recently extended his relationship" with the team.

He "will be on call for all racing and promotional activities also for the 2012 and 2013 seasons", said Ferrari.