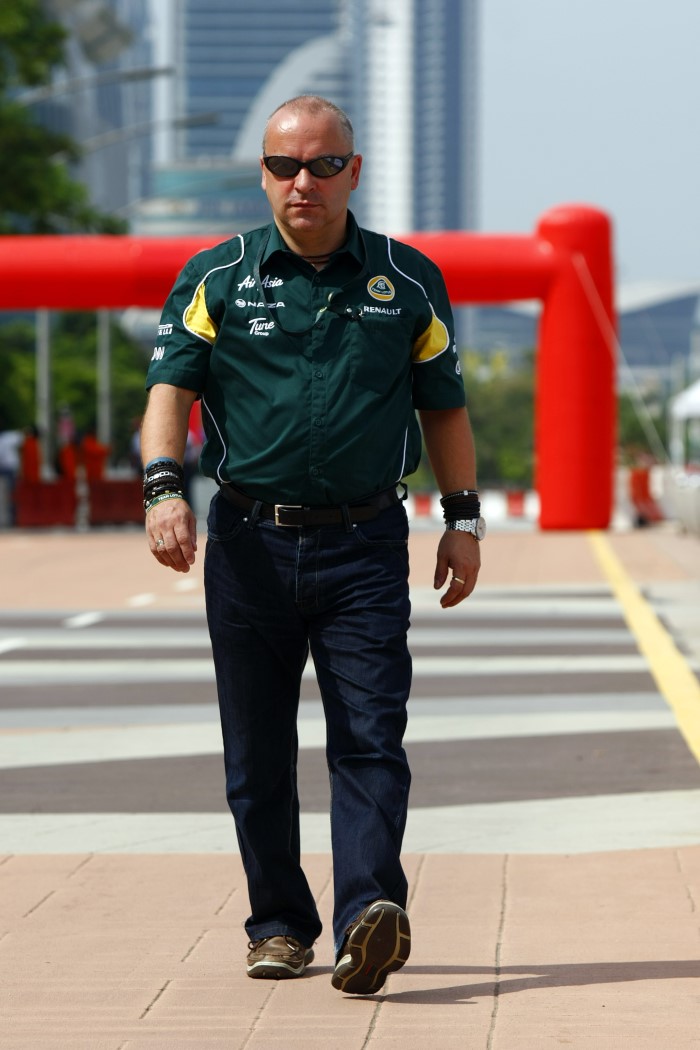 2012 marks the third Formula 1 season for newly-branded Caterham F1. Formerly known as Team Lotus, the squad’s main base will now be in Oxfordshire as the team aims to improve on its Constructors’ Championship position of tenth. We hear the latest from Chief Technical Officer and team founder Mike Gascoyne.

Can you give a technical overview of what the team has been up to during the winter and where you are on the creation of the CT01?
Well, in short, we've been designing and building our new racing car! Throughout the off-season we've been focusing on a number of key elements of the development of this year's car, including a lot of work on optimizing the wind tunnel. We have taken into consideration the changes in the technical regulations this year, most noticeably around the nose box and the push-off tests we had to pass. The rules around crash testing now mean that the cars have to be homologated before the first test, which meant bringing forward all the homologation tests by a month to six weeks before T1. From that point of view, we had a very successful development program, we fully homologated the chassis before Christmas and, actually, I believe we were the first team to pass all the tests.

The design of the car has been progressing since early 2011. It's the first year of real stability for us on the technical side and, by keeping the Renault Sport F1 engine and Red Bull Technology gearbox, we know exactly what we're working with and what we can expect. Each year so far we've effectively not only had a new design team but also a new gearbox and engine combination. Now, however, we have a very stable design team under our Technical Director Mark Smith, and this means we can take a much bigger step forward in terms of the detail of the design – and that really showed in the homologation process.

The car build has gone very smoothly. The car will be completely ready for the first test in Jerez on 7 February. In terms of aerodynamic development, we've continued our program in Italy but have augmented that with a development program in the Williams wind tunnel, which has significantly increased our resources. All of that means I think we'll be able to have a better and more competitive car and we look forward to getting it out, testing it and proving what the numbers are telling us.

What are the big changes? What should the untrained eye be looking out for?
Aerodynamics is always the main focus of performance and improvement. Last year it was all about the blown diffuser, which we struggled with because not having it in 2010 meant we were always playing catch up throughout the 2011 season in comparison to other teams.

The fact it's banned this year certainly plays to our advantage. Other teams had so much more development time, they were able to get much more out of it than we were ever able to, so that eliminates a little of the competition in terms of technical development. But, really, aerodynamics is always one of the main features of development and that's why we've put so much additional resource into it.

And KERS?
Yes, it's no secret that we'll have KERS on the car this year. Towards the end of last year it really started to affect us racing with the midfield cars. It hurt us in qualifying and in our eventual race positions. At the last race in 2011, Heikki made a good start and gained a lot of positions but then lost out by not having KERS.

Having KERS embedded into our 2012 car is another good step forward for us. We had our best ever qualifying in relation to the cars ahead of us in Brazil and, with KERS, we could have possibly out-qualified a few of them. So, again, we have another good reason to be very positive about 2012.

What about this nose? It's creating quite a lot of debate…
Yes. Well, the regulations have changed to limit the height of the nose box to try to ensure that noses don't get too high. Our challenge is that you always want to get the chassis as high as possible to allow clean airflow to the underside of the car – and what you see on the CT01 is our solution to that.

As we're the first car out it is obviously stirring up a lot of debate but, because of the 2012 regulations, I think you'll probably be seeing this type of nose on most of the cars this year.

What are our targets for 2012?
I think we need to see the car on-track first and get feedback from the first tests. Until we run the car, we only have numbers and simulation data to work with. But every team wants to move up the grid and we're no different. We finished tenth in the last two years, which has been our target, but now I think it's time we moved forward again. Let's see what happens we get out on-track.