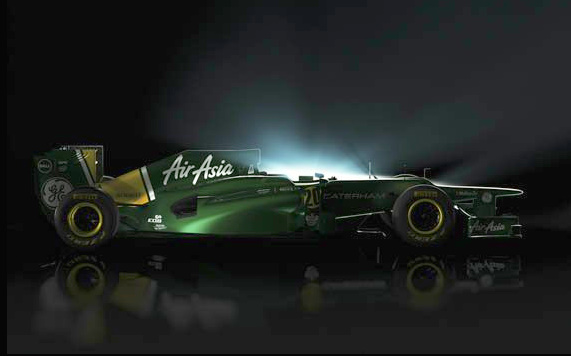 Caterham have become the first team to unveil their 2012 car after issuing a picture of the CT01 via their official twitter account on Wednesday. The team had originally intended to unveil their new challenger on Thursday, on the cover of February’s F1 Racing magazine, but with some subscribers receiving their copies a day earlier, Caterham decided to release a sneak preview.

The green and yellow-liveried CT01 is the third Formula One car to be built by the Norfolk-based team, and the first since their winter name change from Team Lotus to Caterham. It will be raced by the unchanged line-up of Finland’s Heikki Kovalainen and Italy’s Jarno Trulli, which took the team to tenth in the 2011 constructors’ standings.

Powered by a Renault engine, the car features svelte bodywork and a distinctive ‘platypus’-style nose. This stepped-nose design is expected to become commonplace in the pit lane this year, thanks to new safety regulations for 2012 relating to nose height.

The team will publish further details about the CT01, more images and an interview with designer Mike Gascoyne on Thursday. It will make its on-track debut at the first multi-team test of the season, which will take place at Spain’s Jerez circuit from February 7-10.

"As we're the first car out it is obviously stirring up a lot of debate, but because of the 2012 regulations I think you'll probably be seeing this type of nose on most of the cars this year," said chief technical officer Mike Gascoyne.

"The regulations have changed to limit the height of the nosebox to try to ensure that noses don't get too high. Our challenge is that you always want to get the chassis as high as possible to allow clean air flow to the underside of the car, and what you see on the CT01 is our solution to that."

Gascoyne also applauded the decision to ban the blown diffuser, saying that decision will assist Caterham in their goal to improve on last year's P10 in the Constructors' Championship.

"Aerodynamics is always the main focus of performance and improvement. Last year it was all about the blown diffuser, which we struggled with because not having it in 2010 meant we were always playing catch up throughout the 2011 season in comparison to other teams.

"The fact it's banned this year certainly plays to our advantage. Other teams had so much more development time, they were able to get much more out of it than we were ever able to, so that eliminates a little of the competition in terms of technical development.

"But really, aerodynamics is always one of the main features of development and that's why we've put so much additional resource into it."

That, though, is not team's only boost this season as, for the first time, they will also be running KERS, which gives drivers roughly four-tenths extra per lap.

"It's no secret that we'll have KERS on the car this year. Towards the end of last year it really started to affect us racing with the midfield cars," the Rottweiler explained.

"It hurt us in qualifying and in our eventual race positions. At the last race in 2011, Heikki made a good start and gained a lot of positions but then lost out by not having KERS.

"Having KERS embedded into our 2012 car is another good step forward for us. We had our best ever qualifying in relation to the cars ahead of us in Brazil, and with KERS we could have possibly out-qualified a few of them. So, again, we have another good reason to be very positive about 2012."