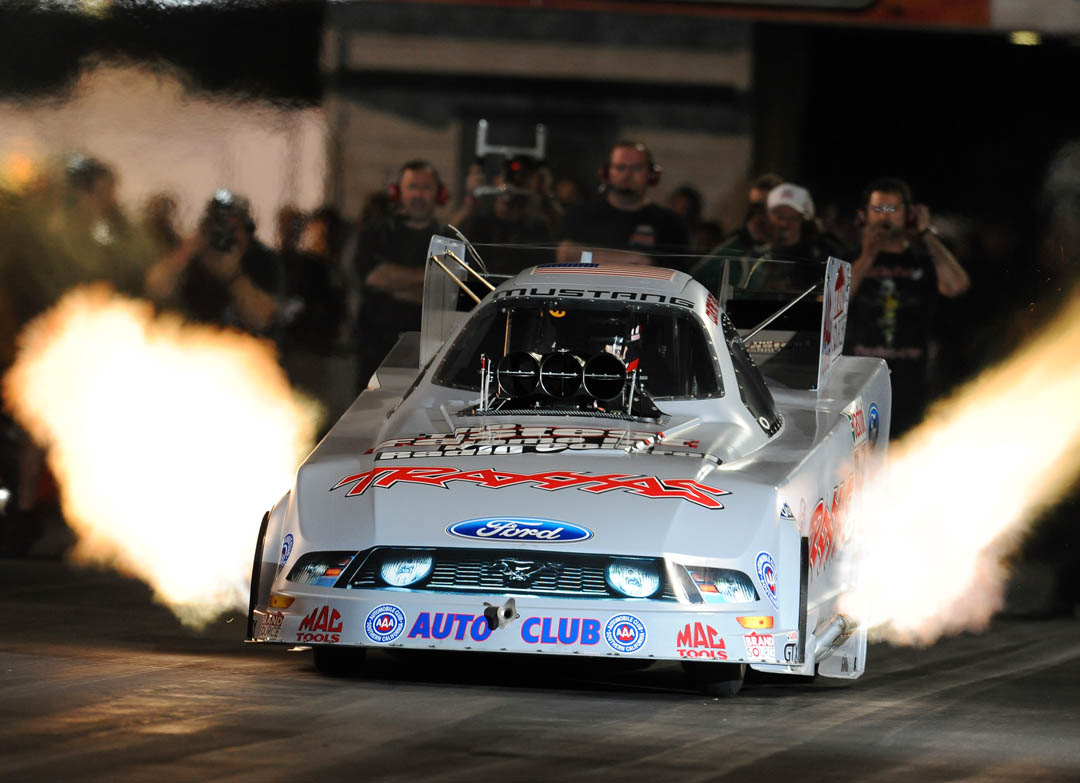 The 2nd annual PRO Winter Warm-Ups got off to a hot start for Robert Hight and the Auto Club Ford Mustang team. The 2009 NHRA Funny Car champion recorded two of the quickest runs of the evening sessions including a blazing run, 4.056 seconds, to close out the night versus Jack Beckman in the Funny Car finale.

In the first session Hight was paired with two-time Funny Car champion Cruz Pedregon and the duo recorded matching 4.06 second runs with Hight edging Pedregon 4.062 to 4.068 seconds. Hight’s mile per hour was an astounding 315.56, the second fastest speed for the Funny Cars at the Winter Warm-Up. Matt Hagan recorded the fastest time in the second session, 315.71 mph.

“We’re learning a lot of new things. We got new clutch disks and we’re starting to get a handle on it. This run tonight was probably going to be right along with Beckman’s .03 (4.037 ET) from earlier. It put a cylinder out down there and it moved me over to the inside, but still was good enough to run an .05 (4.056 ET)," said Robert Hight.

“We were on another good one last night. We’re trying things and that’s why we’re here testing; to get better and to do better than we did last year. I’m happy with going down the track both runs tonight. You know, we put on a good show for the fans because they showed up here, packed the place and that’s exciting. After having a winter off, to get to come back here and race for the fans- that’s what this is all about."

Hight was paired with Jack Beckman in the Funny Car finale and the Auto Club Mustang flew down the all concrete track in a session best 4.056 seconds. Beckman was also on a solid run and the 2012 NHRA championship runner-up tried to leg it out but was forced to lift at the top end as his Valvoline NextGen Dodge Charger made a strong move to the centerline.

Mike Neff was paired with Courtney Force in the second session. The teammates launched at the same time and Neff drove away from the youngest Force as her Traxxas Mustang shook the tires. Neff recorded a solid time of 4.088 seconds at 310.34 mph. Tire shake was a persistent problem for a number of Funny Car teams in both the sessions of the Winter Warm-Up as track conditions were in flux throughout the evening.

Team leader John Force executed a masterful pedal job in the second session racing alongside reigning Funny Car champion Matt Hagan. Force was able to gather his Castrol GTX HIGH MILEAGE under control and attempt to chase down Hagan. Force did make a strong run on Friday prior to the PRO Winter Warm-Ups recording a 4.106 at 310.55 mph in the morning runs.

The 2nd annual Winter Warm-Up will continue tomorrow with runs at 5 p.m. and 7 p.m. Funny Car will lead off with John Force racing daughter Courtney Force in the first session.