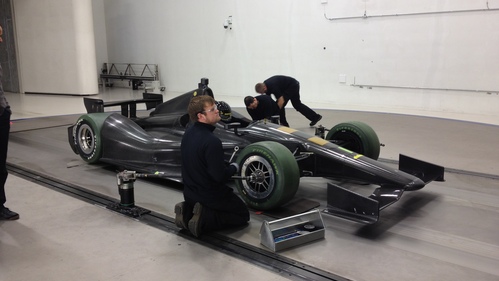 A two-day wind tunnel test last week proved that the Dallara DW12 chassis is up to the task on ovals, according to INDYCAR vice president of technology Will Phillips.

Questions arose during testing in November at the Indianapolis Motor Speedway as the chassis achieved only an average lap speed of 215.6 mph on the 2.5-mile oval. INDYCAR and Dallara Automobili arranged the full-scale, rolling test at Windshear in North Carolina to discern what could be done to increase aerodynamic performance.

A 2011 Target Chip Ganassi Racing IR11 chassis in qualification trim that recorded a 227.34 mph lap speed at the Speedway in May was utilized as a baseline reference.

“We then compared the 2012 car as it was run at its fastest during the (November) testing at the Speedway," Phillips said. “We showed that aerodynamically the car was limited to 218.4 mph, so the (drivers/teams) did a good job of reaching its potential. We then compared the production car, which is slightly different from the prototype in terms of different mirrors, different rear wheel fairings, subtle differences in chassis construction and better integration of the Zylon (side intrusion) panels.

“Basically, the production car is more slippery (moves the air better) than the prototype. That lifted the speed as the car was run. We then looked at how could we improve the aerodynamic force of the car? Basically, by optimizing the aero set-up, re-balancing the car and then putting on some aero development parts, it showed that using a nominal assumed horsepower of 575 the car is capable of 225 mph."

Fifteen IZOD IndyCar Series teams picked up their first DW12 chassis on Dec. 15, with 17 additional chassis being picked up Jan. 16-17. On-track engine development for manufacturers Chevrolet, Honda and Lotus continues this week at Sebring International Raceway. The season-opening Honda Grand Prix of St. Petersburg is March 25, and the first oval race is the Indianapolis 500 on May 27.

“Same test at same venue using an ‘11 car and ‘12 car, and that’s the only data we’re using to compare," Phillips said. “It’s about as clean as we can make it for a two-day test."

With the introduction of multiple aerodynamic body kits in 2013, the potential of higher speeds will be an item INDYCAR officials will have to address.

“As we look at aero kits for 2013, the car could be exceeding expectations as they reduce drag further," Phillips said. “But it’s not always about aerodynamics. You have to mechanically set the car up to drive it, so it’s always a balance. Aerodynamically, we’ve proven that it can happen but we haven’t proven mechanically that we can set the car up to go that speed yet." IndyCar.com