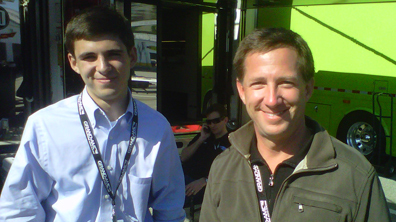 The worlds of NASCAR, IndyCar, USAC and the Rolex Series will come together next week as part of the No. 36 Yellow Dragon Motorsports Mazda RX-8 driver line-up for the 50th running of the Rolex 24 At Daytona.

The father and son team of John and Jarett Andretti highlight the entry and will race together for the first time. Joining them will be Mazda sports car racing veteran Taylor Hacquard, and promising Mazda open-wheel driver Anders Krohn, forming Yellow Dragon’s most impressive Rolex 24 driver squad to date.

"The outstanding driver team assembled for the 50th anniversary Rolex 24 at Daytona came together quickly in a coordinated effort," said Yellow Dragon owner Jack Smith. “We are very excited to return to the Rolex 24 At Daytona on its 50th anniversary with a driver group that has the level of accomplishment of John Andretti, Jarett Andretti, Taylor Hacquard, and Anders Krohn. We believe our team is truly an extraordinary program for the 2012 Rolex 24."

Yellow Dragon will also contest the Rolex 24 as one of three privately owned Mazda programs that receive support from the factory Mazda SpeedSource team.

“All of us at Mazda are pleased to see Yellow Dragon back on the Rolex 24 grid," said Mazda Motorsports Director John Doonan. “Their 2011 race was cut short and they are back in 2012 to finish the job. Jack Smith has been very dedicated to our Mazda RX-8 program and he has tremendous passion for top level sports car racing. From the outset of this GT program, it is teams like Yellow Dragon, Team Sahlens and Dempsey Racing that we had in mind – teams who are members of the Mazda family and who share the same passion for winning with reliable equipment that Mazda has stood for over the last four decades."

With 12 Indy 500 and 14 Daytona 500 starts to his credit, John Andretti is one of America’s most accomplished racers, and as the overall winner of the 1989 Rolex 24 At Daytona, returning to race at the storied endurance event with his son Jarett—and with the support of Window World–was an opportunity he couldn’t pass up.

“This will be my fourth Rolex 24, and the opportunity to race with Jarett was the deciding factor," he said. “The 50thAnniversary of the race is also a major motivation, and I’m looking forward to working with Window World, the team and other drivers in this historic event with a winning manufacturer like Mazda."

After earning a USAC championship in 2011, Jarett Andretti is poised to show the kind of versatility that has become synonymous with his last name. Trading midget racing for the wail of a triple-rotor Mazda RX-8, the teenager will draw from the experience of his father and teammates during his professional road racing debut.

"Adapting to a new car is always a challenge, but I have a great team in Yellow Dragon Motorsports to learn from as well as talented and experienced co-drivers who will help me get up to speed quickly," he said.

Taylor Hacquard is no stranger to the legions of Mazda fans and racers throughout North America and as the one returning driver to Yellow Dragon’s Rolex 24 line-up, the young Canadian star will be an invaluable source of information to his new teammates.

“I’m very excited to be returning to the Rolex 24 for another shot at the Rolex GT win with Mazda," he said. “Last year our run was over after five hours, so we certainly have some unfinished business. It is great to be reunited with Yellow Dragon, and they are an excellent group of people that put out a strong car that is capable to contend for the win. I’m very grateful to be affiliated with the Mazda family; Mazda’s commitment to racing is like no other and as a driver in this day and age in motorsports we need manufacturers like them to keep racing alive. I’m very confident in the group of drivers we have that if everything goes to plan, we will be there in the end."

The final member of the team is Norway’s Anders Krohn, who, like Hacquard, has spent considerable time racing Mazda-powered machinery. “The Viking," as he’s known, is using the Rolex 24 to change his career path from Mazda’s Road To Indy program to sports car racing.

“Ever since I came to the U.S. in 2008, I've wanted to part take in the Rolex 24," he said. “I didn't really have any thoughts on when this would happen, but having been involved with Mazda for the past three years, I knew it had to be with them. What they've done in the North American Open-Wheel scene is beyond what any other auto manufacturer has done, and I can’t wait to keep representing the Zoom Zoom brand in sports cars with Yellow Dragon Motorsports. Everything will be new to me, so it's great to have so many experienced people supporting the program. As for the future, my main focus is now on sports cars."

With young representatives from all forms of Mazda’s motor racing activities and multi-generational drivers in the No. 36 Mazda RX-8, Doonan expressed his enthusiasm for Yellow Dragon’s potential at the Rolex 24.

“The driver line-up that has assembled with this Yellow Dragon entry is big," he said. “To have two drivers that have come up through Mazda ladder series is so rewarding for my colleagues and I. Taylor Hacquard (Star Mazda Series and Continental Tire ST) and Anders Krohn (USF2000, Star Mazda, and Indy Lights) are both fine young talents with terrific attitudes and a burning desire to be part of winning programs. To also have John and Jarett as part of a Mazda program is truly special. I grew up watching John’s career and was glued to the TV during this 1989 victory. To be able to share in the experience of John and Jarett driving together as father and son is an added bonus. Jarett is ‘one to watch, and we certainly hope he finds his way up the motorsports career ladder in Mazdas. We all wish the team the very best as they get set to tackle the 50th Anniversary of the Rolex 24."

To prepare for the arduous event, the Yellow Dragon team will conduct private track tests with its drivers prior to the race, and once on-track activity begins at Daytona on Thursday, January 26th, Smith is confident his team will be ready to succeed.

“Our plan is to use the lessons learned last year together with the cumulative experience of our team to sharpen our focus on running a consistent, competitive program for the Rolex 24," he said. “We do not underestimate our competition but we believe that our car, team, and strategy will be competitive over the 24 hours of the race because of the proven reliability of the Mazda brand and the quality of our team."