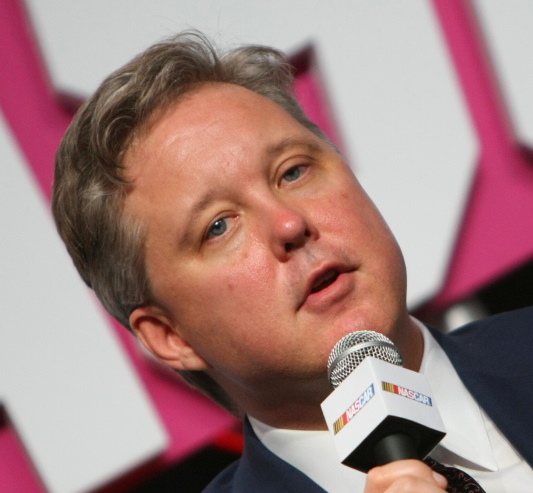 NASCAR CEO Brian France recently sat down for an interview with Broadcasting & Cable that covered a variety of subjects, Here are a few:

You say you're pretty aggressive about what your TV partners need to do for NASCAR. What do you want from them?
We are always the sport that is under-covered given the ratings and size of the events. In particular, ESPN. They just have so many platforms. So we are pushing real hard with them to have a more integrated approach. We have hired people to service them better, so we can help them accomplish that. They have the most assets to be deployed; it doesn't mean everyone else doesn't have some big ones and good ones. We are going to work to make them a better partner.

Your TV deals are up in 2014, but when do your negotiating windows open with your current partners?
Not for a little while, but we are having conversations, because a lot of our partners have been clear they would prefer to renew. All things being equal, our first hope is that the incumbents do renew. . . I think [talks] could heat up at any time, that's my sense. It's not cold now, we are having conversations, my sense is things will happen sooner rather than later, and sooner than they normally would in a cycle of renewals.

How much does it hurt that Dale Earnhardt Jr., your most marketable driver, doesn't win races?
It hurts. It hurts. He is trying to win and get his team to have the confidence to not only win one but rip off more. He did improve and made the Chase, he's a big franchise, he's the most popular driver in NASCAR, so it would help us if he would win.

Everyone talks about creating superstars, but does your sport need villains?
I think some version of a villain, yeah. I think you need people that no one cheers for, I think that's healthy. But there are limits to that. It's great when there is someone that acts different, has a little bit of bravado, that typically is good. Broadcasting & Cable