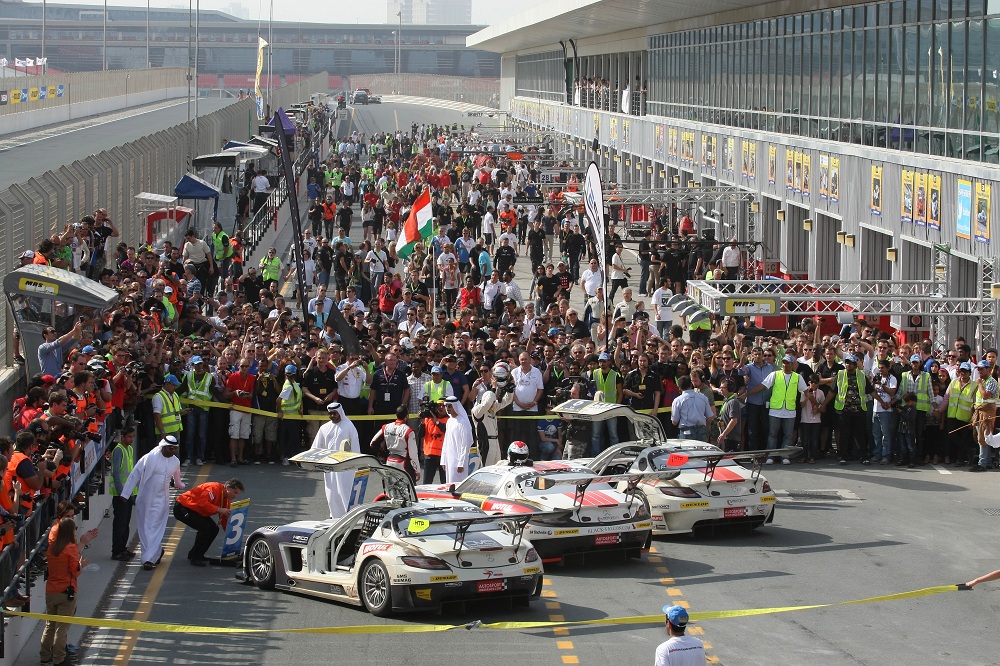 One year after the Mercedes-Benz SLS AMG GT3 made its 24-hour race debut in the Dunlop 24H DUBAI, the sportscar with the gullwing doors locked out all three podium places in the seventh running of the endurance race for touring cars, GTs and 24H Specials. After 24 hours of action-packed racing at the 5.390 kilometers long Dubai Autodrome, German team Abu Dhabi by Black Falcon claimed victory, its four drivers Khaled Al Qubaisi, Sean Edwards, Jeroen Bleekemolen and Thomas Jager having completed a total of 628 laps (3,384.92 km) to establish a new record distance in the Dunlop 24H DUBAI.

Second and third place both went to the Heico Motorsport team, with Bernd Schneider, Maximilian Buhk, Christiaan Frankenhout, Max Nilsson and Andreas Zuber finishing second from the team with the sister car consisting of Bernd Schneider, Kenneth Heyer, Andreas Simonsen and Rodolfo Gonzalez. Last year’s winning team, Saudi Falcons by Schubert, saw its drivers Abdulaziz Al Faisal, Faisal Binladen, Edward SandstrÃ¶m, JÃ¶rg MÃ¼ller and Claudia HÃ¼rtgen with the BMW Z4 in contention for a podium finish for most of the race, but debris in the air intake with some three hours remaining made them drop to fourth, where they finished.

Winning the Dunlop 24H DUBAI was the first victory for Mercedes-Benz in a 24-hour race since the Mercedes-powered Sauber C9 won the 1989 Le Mans 24 Hours. After 24 hours at the Dubai Autodrome, Khaled Al Qubaisi drove the Abu Dhabi by Black Falcon team’s Mercedes-Benz SLS AMG with starting number 3 across the finish line. Together with Bernd Schneider and Andreas Simonsen, the drivers of the two Heico-Mercedes-Benz SLS AMGs that came second and third, Al Qubaisi was then invited for the traditional camel ride to the winners’ podium for the prize-giving ceremony. “This was just fantastic. We tried it last year, but didn’t succeed, but this year, everything has come our way. Winning this race is something very special", said Al Qubaisi.

The Abu Dhabi by Black Falcon-Mercedes-Benz SLS AMG GT3 moved up into the lead for the first time in the second hour of the race and remained in the top three for most of the race, never more than one lap down on the lead, which it held onto itself for a very long time. Behind the three Mercedes-Benz SLS AMG’s that locked out the podium and the BMW Z4 in fourth place, the best-placed Porsche in this year’s Dunlop 24H DUBAI was the number 18-Fach Auto Tech entry, driven by Otto Klohs, Heinz Bruder, Carlo Lusser, Martin Ragginger and Swen Dolenc to finish fifth.