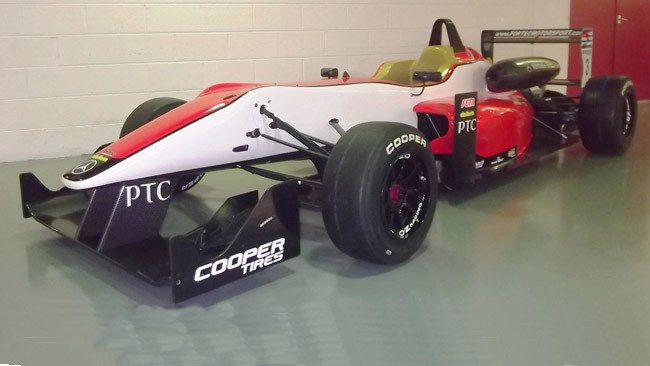 Dallara’s all-new F312, the chassis which will form the backbone of the 2012 Cooper Tires British Formula 3 International Series grid, broke cover today (Thursday) at the Autosport International Show in Birmingham.

Centerpiece of a display of classic Formula 3 machinery on the Historic Sports Car Club stand, the Dallara took its first public bow to great acclaim from the public, teams and competitors, including championship newcomer Alex Lynn, who appreciated his first glimpse of the Mercedes-Benz-powered Fortec Motorsport machine which he will campaign this season.

Parma, Italy-based manufacturer Dallara says the F312 represents a fundamental rethink in terms of aerodynamics and key mechanical components. Key points of the new car include:

“For Dallara it is a hugely important car," says the company, “and it is charged with upholding the winning tradition of decades of world-wide Formula 3 competition." Dallara chassis have won the British F3 championship title for the last 19 seasons, powered by a variety of engines – Mugen Honda, Vauxhall, Mercedes and, latterly, Volkswagen.

For 18-year-old Alex Lynn, who will make his British F3 debut with Fortec over Easter (6/7 April) at Oulton Park, the first sight of his new mount was an exciting one: “I think the car looks really cool," said the Essex-based racer. “It’s a lot more modern-looking than the old car – it’s really come up with the times now, and I think it’s going to be a fantastic car for the series and for Formula 3 in general. Hopefully it will make for some exciting racing as well. I can’t wait to get out on track in it."

Nestled alongside the F312 in the HSCC display are some fabulous examples of the Formula 3 breed from the 1950s through to present times, including three British championship-winning Dallaras from the Carlin team: Takuma Sato’s 2001 machine, Alvaro Parente’s 2005 car and the chassis which carried Jaime Alguersuari, Daniel Ricciardo, Jean-Eric Vergne and Felipe Nasr to their crowns between 2008 and ’11.

Reigning champion Nasr was at the show today to meet the media ahead of his prize-drive appearance in the 28/29 January Rolex 24 at Daytona. The Brazilian won his Daytona sports-prototype seat with the Michael Shank Racing team thanks to his points-topping performance in the Sunoco Daytona Challenge. Autosport International continues at the NEC Birmingham until Sunday (15 January).