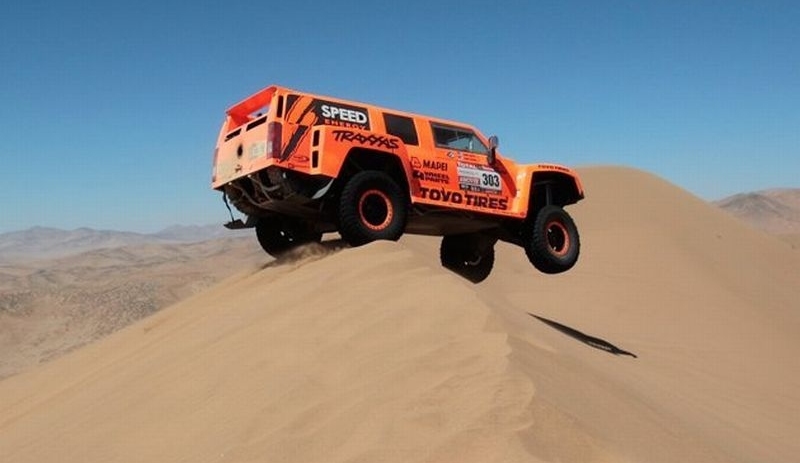 Tuesday’s stage saw the competitors head further north through Chile from Antofagasta to Iquique. The second half of the stage was separated by a neutralized section on tarmac, prior to taking on the wildly steep descent back down to the Pacific shoreline and the finish at Iquique, as previously used two years ago.

Bikes: Despres Back Infront After Getting Stuck In The Mud

After losing his lead yesterday after getting stuck in exceedingly thick mud that was not shown in the roadbook, Cyril Despres made up the deficit on KTM teammate Marc Coma to regain the overall lead with a stage win. He was only second in the stage rankings at the end of the day though, after KTM had opted to change their engines and incur a 15 minute penalty for each of their factory drivers. The overall gap between Despres and Coma now stands at 2m28s.

“It’s feeling good," said Despres. “After a difficult day yesterday when you start to doubt, I had to get back to winning ways. It wasn’t easy to psyche myself up for it, but I’m very happy with my day’s work. We came into this looking at a battle for seconds or minutes. It’s very competitive. Like any top level sportsman, if you don’t like confrontation or squeezing the last ounces of strength out of yourself, then you’re not ready for a fight. But, as for me, I’m up for it."

Coma commented: “We knew that this would be a difficult race. It was long and there was plenty of navigation to deal with. We’re coming to the crunch part of the rally. Cyril is a major rival and we do battle over every single kilometer. But I think it’s interesting, it’s sport. Yesterday, the KTM technicians decided it was time to change our engines because we’d reached the half-way point. It’s a very good idea."

Taking the engine-change penalties into account, third-placed overall Helder Rodrigues ended up top of the timesheets for the day. Despite gaining 15 minutes on Despres and Coma overall, the Yamaha rider is still the best part of 45 minutes behind, and has the issue of an old engine.

The stage was dominated again by the Patronelli brothers. They rode together through the stage, with rally leader Alejandro taking the win ahead of Marcos, and 44 minutes clear of Tomas Maffei.

“We rode almost all the stage together," said Marcos. “In the end, over the last 60 kilometers, we were neck and neck. It was a superb stage, quick and a bit tricky on some parts with dunes at the end; I was a bit worried at the beginning of the stage because there were a lot of stones. There was still a long way to go and I was scared of getting a puncture. I’m happy with my machine because the Yamaha is working well. I’m more than an hour behind, so winning the category is out of my reach now, but finishing each day and getting through the stages until Lima is my goal."

It was certainly a mixed day in the Robby Gordon camp. While the American himself triumphed on the stage to take a minute and a half out of rally leader Stephane Peterhansel’s advantage, Nasser Al-Attiyah’s Dakar defense came to an end in the other Hummer. After breaking numerous alternator belts, the Qatari called it a day. He’s working on returning with his new WRC partner Citroen for next year.

“It was a very good special for us again," said Gordon upon finishing the stage. “On the transfer stage, I think we had [Peterhansel] beat by about a minute and a half. But we need more than a minute and a half, so I pushed very hard on the last section, as hard as I could go the whole time and it will be interesting to see how much time we put on him because we pushed, like qualifying hard, not really knowing where you’re going. We had a couple of big scary moments. For us, we’ve got to make time. We’re in a different position to him. He has to conserve his time and I’ve got to make it. We’ve got four days left, four real days of racing left and the Hummer’s strong. 19 seconds? He made a lot of time up on me, then. I can’t believe he could catch us there, because we were going crazy. So he’s a madman; if he beats us, he’s a madman. Madder than me!"

Trucks: Loprais Crashes Out Of Second

Gerard De Rooy’s chances of victory improved further when nearest rival Ales Loprais had an accident in his Tatra on the neutralized section, putting him out of the rally. After losing hours in the dunes on Saturday, Miki Biasion was victorious on the stage. De Rooy now leads Hans Stacey by 47 minutes.

Dakar Rally results after the 556km ninth stage from Antofagasta to Iquique: