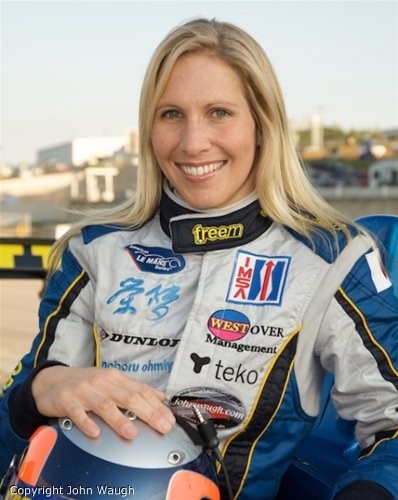 The British-based Californian, who combines careers as a professional equestrian and race car driver, has focused much of her energy on 3 Day Eventing in recent years, recording a string of impressive results during 2011 while also developing her burgeoning Chailey Stud Equestrian Centre into South England's premier facility.
Halliday was nevertheless keen to maintain her involvement with four-wheeled as well as four-legged competition, working as a commentator for Eurosport's coverage of the Le Mans 24 Hours and as an expert judge on SPEED TV's GT Academy.
In 2012 she will be back behind the wheel of a racing car alongside her busy eventing schedule, launching an assault on the fiercely competitive Lotus Cup championship aboard one of the British marque’s 2-Eleven sportscars. The effort will be run by the vastly experienced John Danby Racing outfit, for whom Liz successfully contested a number of historic events during 2010. The smooth running of these outings made the Colchester-based squad a natural choice for her return to competitive racing action.
The Lotus Cup takes in eight races over the course of 2012, beginning in style at British Grand Prix venue Silverstone on April 15. Other highlights include joining the DTM bill at Brands Hatch on May 19/20 and a trip to historic Belgian circuit Zolder on September 22/23.
Liz Halliday: "I'm really excited to be going racing again in 2012. It’s shaping up to be an extremely busy year: alongside the Lotus Cup, I'll still be focusing heavily on my eventing competitions and on the running of Chailey Stud Equestrian Centre, and I am also keen to continue my TV work, so there will barely be time to catch my breath.
"Moreover, I'm thrilled to be renewing my relationship with John Danby Racing. They're a fantastic team, extremely hard working and reliable. They did an excellent job running the historics in 2010 and as a group they inspire a great deal of confidence in a driver. I can't wait to get started and to begin working with them again."
John Danby, Team Principal: “We are extremely pleased to be welcoming Liz on board full-time for 2012. Having worked with her previously we know the commitment and passion she brings to her racing, and are looking forward to a thoroughly successful season together."