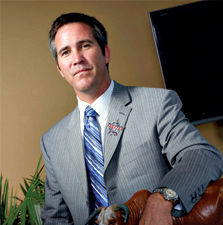 IndyCar CEO Randy Bernard continues to do a lot of things right for the series and below are his quotes on the major change in the TEAM payout Leader Card Circle program as told to Speed.com. It's now going to be merit based – i.e. what is your team going to do to help IndyCar in the way of sponsor activation and other criteria that makes you deserving of this money.

“Townsend Bell and I were sitting at dinner one night doing some brainstorming, and he brought up the idea of the Leader Circle program being more merit-based than just making payouts based on entrant points—looking at what teams do to deserve those contracts above and beyond what takes place on the race track," he told SPEED.com. “I really like the concept. If we’re going to make a significant financial investment to help our top 22 teams, I think it’s fair to ask or understand how those teams plan on helping the sport of IndyCar.

"We took the Leader Circle contracts down to 22 last year because we wanted to put the emphasis more on quality," he said. “This year, after Newman/Haas dropped out, everybody was asking what INDYCAR was going to do with their two spots—who was going to get that money. We had this happen last year when Gil de Ferran’s team fell out and we had to come up with a way to give that contract to a deserving team or driver, but it still came down to an opinion-based deal on who should get it and I didn’t like that. When Newman/Haas stepped back, we wanted to come up with a more formal system.

“For this year, to start, every one of the [20] cars needs to make a presentation to IndyCar. We want to learn about their plans, their drivers, their sponsors, how they plan to activate those sponsors, what kind of media and promotions the teams are working on and how they are basically going to interact with the series and our fans. Then, we can sit down and discuss how we can help, how we can cross-promote, activate, how we can work closer with each team to make both sides stronger.

“For the 20 who earned it last year, our feeling is that you deserve it and will get it," he said. “But we feel that this new exercise will be a good process for my senior management team and to educate them on what’s happening at all levels with our teams. And once teams are finished making their hour-long presentation, we’re going to give them an hour presentation on what IndyCar is doing this year. From there, IndyCar and every team should be better positioned to work more closely.

“If a team comes in with a sponsor and shows us they can create 25 million impressions for the brand of IndyCar, or aggressively promote our sport through their driver or [marketing] campaigns or B2B relationships, we are going to award those additional spots by who makes the strongest presentation and has the most sound plan.

“And then we’re going to hold them accountable for it. If they say they’re going to do something, they need to do it. I don’t want pie-in-the-sky dreams and then get to the end of the season and see that none of what they promised was actually carried out. We have accountability measures we’ve set up to make sure teams follow through on their end.

“More than anything, we can’t put personalities, or who it is that’s sitting in front of us–whether it’s an old team or a new team or whatever else–as a priority. It’s going to be an objective process. Will the established teams that have bigger plans have an advantage? It’ll be easier for them, I’d imagine. But that’s not to say a small team or a new team that comes in with a sponsor who wants to do big things won’t get a contract. It isn’t all about money or how big the sponsor is.

“Maybe they have significant media partners or something else that makes an impact. There are a lot of options on how teams can get a contract. My executive team will be there—operations, marketing and you name it—to decide the best direction to go.

“The total payout amount is staying the same, basically, but it’s on a sliding scale based on the manufacturers," said Bernard. “If 10 contracts are earned by teams belonging to one manufacturer, and 10 go to another, the last two spots going to the third manufacturer would get a bigger slice of the pie.

“I think the proof will be in the pudding this year," he said. “If it helps the sport grow, it will have to be looked at as an annual routine for every contract. It’s a trial year for this, so we’ll know how well it worked and if we want to make any changes for next year."