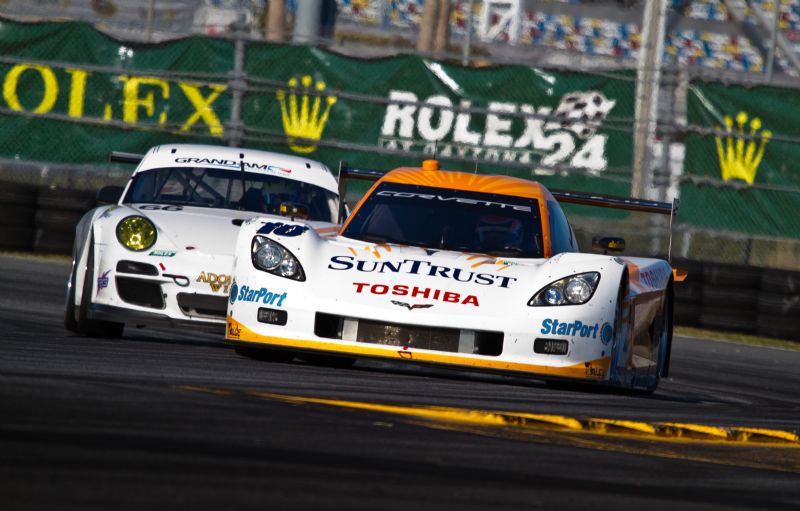 Sixth fastest, in a new No. 02 Target/TELMEX BMW/Riley, was NASCAR regular Juan Pablo Montoya with a speed of 125.810 mph.

Robin Liddell led the 44-car GT entry with a lap of 117.048 mph in the No. 57 Stevenson Chevrolet Camaro co-driven by John Edwards and Ronnie Bremer. Liddell, riding a two-race winning streak, ran his fastest lap early in the morning session before experiencing transmission troubles.

Fall-Line Motorsports topped the charts in Continental Tire Sports Car Challenge action, claiming the top two speeds in Grand Sport on Day 1. Charles Espenlaub turned the day's fastest lap in the No. 48 BMW M3 (109.278 mph) while Hugh Plumb was second-fastest in the No. 45 BMW M3 (108.963 mph). Cory Friedman was fastest in Street Tuner (100.466 mph) in the No. 24 Autometrics Motorsports Porsche Boxster.

Noteworthy
TELMEX Chip Ganassi Racing with Felix Sabates rolled out a pair of new Riley DPG3s, including a new No. 01 BMW/Riley for 2011 DP champion Scott Pruett and Memo Rojas. The pair won the 2011 Rolex 24, and will be rejoined by Joey Hand and Graham Rahal for this year's event. Returning in the team's No. 02 BMW/Riley are Juan Pablo Montoya, Scott Dixon, Dario Franchitti and Jamie McMurray.

Patrick Dempsey stepped out of his Mazda RX-8 and logged some laps for Multimatic Motorsports in the team's new Aston Martin Vantage. Dempsey also will return to the No. 40 Visit Florida Mazda RX-8 that finished third in the 2011 Rolex 24.

Bruce Ledoux, driving the No. 03 Mazda MX-5 for CJ Wilson Racing, was transported to Halifax Medical Center following an incident in the chicane during Friday afternoon's session. He was awake and alert, awaiting further evaluation at Halifax.

The Quotes:
"This is the strongest GT field in any series – ever." Andy Lally, Magnus Racing Porsche GT3

"This is a whole new piece, and we're still learning about it. We've got a lot to learn and a long way to go, but we're very comfortable about how our first day went." Scott Pruett, No. 01 TELMEX BMW/Riley

"We're not really concerned about our qualifying speed. We're more concerned about how the car feels in the race. That makes all the difference in the world. Look at last year – we qualified both cars out of the top 10 and we were running right up there after only a few hours. Right now, everything is right on track as far as our racing and testing program is concerned." Christian Fittipaldi, No. 9 Action Express Racing Corvette Daytona Prototype

"Today was the first time I have ever driven at Daytona and it was awesome, absolutely amazing. I couldn't believe how steep the banking was when I saw it. Daytona is a very quick circuit and the infield can be quite technical. It's such a unique place – I really can't compare it to any other circuit I have driven before." Aaron Steele, No. 6 Mitchum Motorsports Chevrolet Camaro, Sunoco GRAND-AM 200 Challenge winner

"We came here with a good base setup and were able to come out strong and run a good time in the opening session. The Rolex Series looks very good this year, with the new DPs and new manufacturers in GT. We're happy to be here with a good team. No one's sure about the pace of the new cars, and it's hard to tell where everyone is at this point, but overall, it feels very promising." Robin Liddell, No. 57 Stevenson Motorsports Chevrolet Camaro.