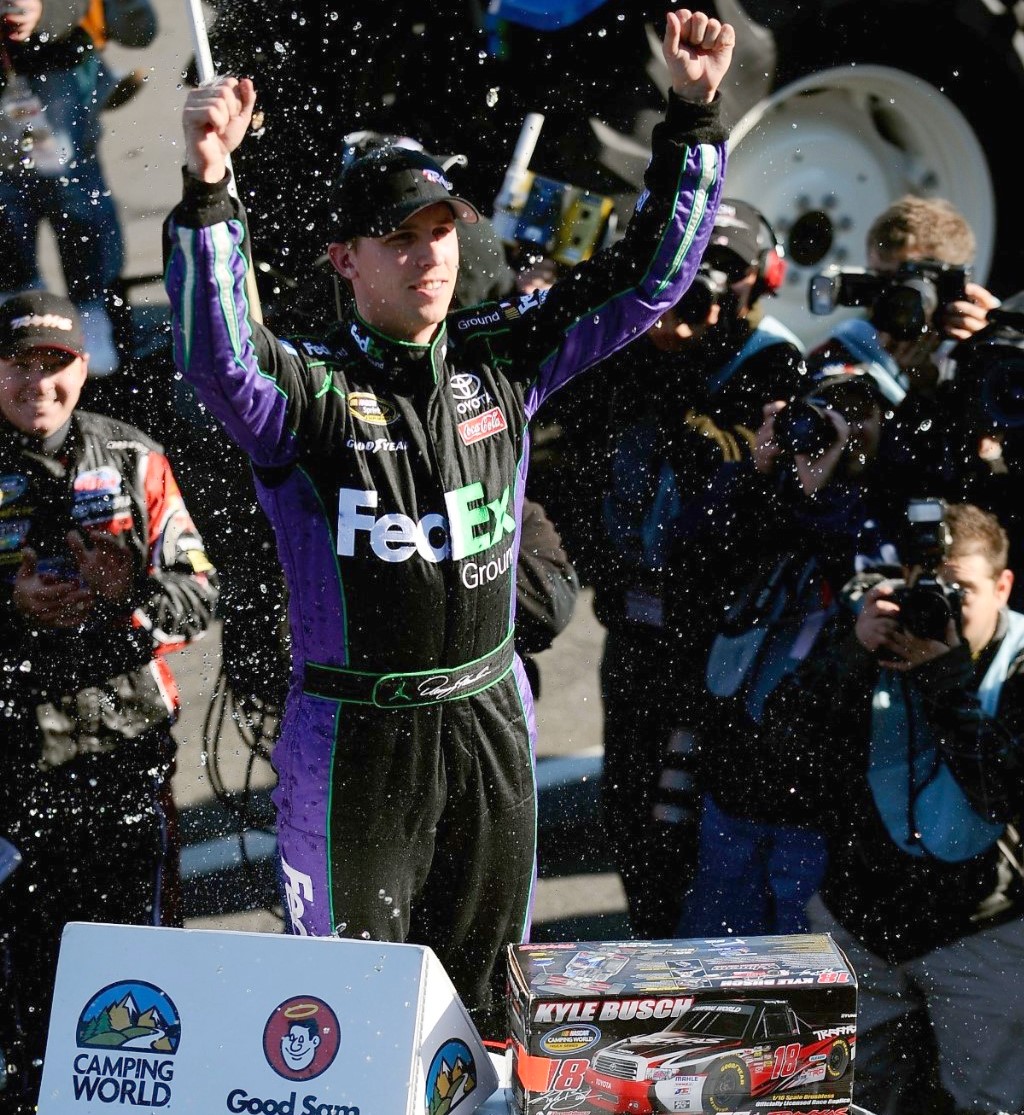 Making excellent use of a fresh set of tires, Denny Hamlin drove through the field after a pit stop on Lap 134 and won Saturday’s Kroger 200 Camping World Truck Series race at Martinsville Speedway in his only start this year.

The victory was Hamlin’s first in the series in 12 starts, adding the driver of the No. 18 Kyle Busch Motorsports Toyota to the list of drivers, now 23 in number, who have won at least one race in each of NASCAR’s top three series.

“It’s a big deal for me, more than what people probably think," said Hamlin, who has run one truck race per year in 2009, 2010 and 2011. “When they think we go down to these different series—Nationwide and truck—and we’re just going down there to try to get wins, from my standpoint, it’s very, very tough.

“The truck series is more competitive now than what it’s ever been, and it means as lot to myself to win a truck series race, especially running just one a year, usually. … This was just one of those weekends where everything worked out great for us."

Hamlin passed Hornaday and Dillon moments after a restart on Lap 187, as Dillon slid up the racetrack in Turn 1 but managed to maintain control.

“We gave it to him—I did," said Dillon, who expanded his points lead to 11 over 10th-place finisher James Buescher. “Just couldn’t make the first turn and ran into Ron. If I could have made it through the first turn, it would have been me (or) Ron in victory lane, I’m pretty sure. We had faster trucks."

Hornaday said he expected Dillon to slip in the corner and was prepared for it.

“The lap before the (next-to-last) restart, I cleaned my tires off pretty good, and I still shoved my nose pretty good," said Hornaday, who gained one point on Dillon and now is tied for third in the standings with Sauter, 15 points back. “When I saw Austin not weaving his truck as much as I did on the (last) restart, I knew he was coming up into me.

“I had to make sure his right front tire was at my door, and I could lean on him back a little bit, so we didn’t get up in the marbles. It worked out for both of us, other than Denny Hamlin snuck through the middle of both of us and stole the win—but we’ll take it."

Dillon passed Harvick for the lead on Lap 141 shortly after a restart that followed the sixth caution of the race, caused by contact between Germain Racing teammates Todd Bodine and Max Papis, who battled until Papis spun off Bodine’s front bumper.

After Papis spun again to bring out the seventh caution, Dillon led the field to the green flag for a restart on Lap 152 and held the top spot until Ryan Sieg’s spin on Lap 172 caused caution No. 8. Moments before the yellow flew, Hornaday passed Harvick for second, setting up a battle between a four-time champion (Hornaday) and a driver seeking his first title (Dillon).

When the field restarted on Lap 179, Dillon and Hornaday held the top two spots, chased by Hamlin and Sauter, both on fresher tires. One caution later, Hamlin powered beneath both Hornaday and Dillon on a Lap 187 restart and pulled away for the win.