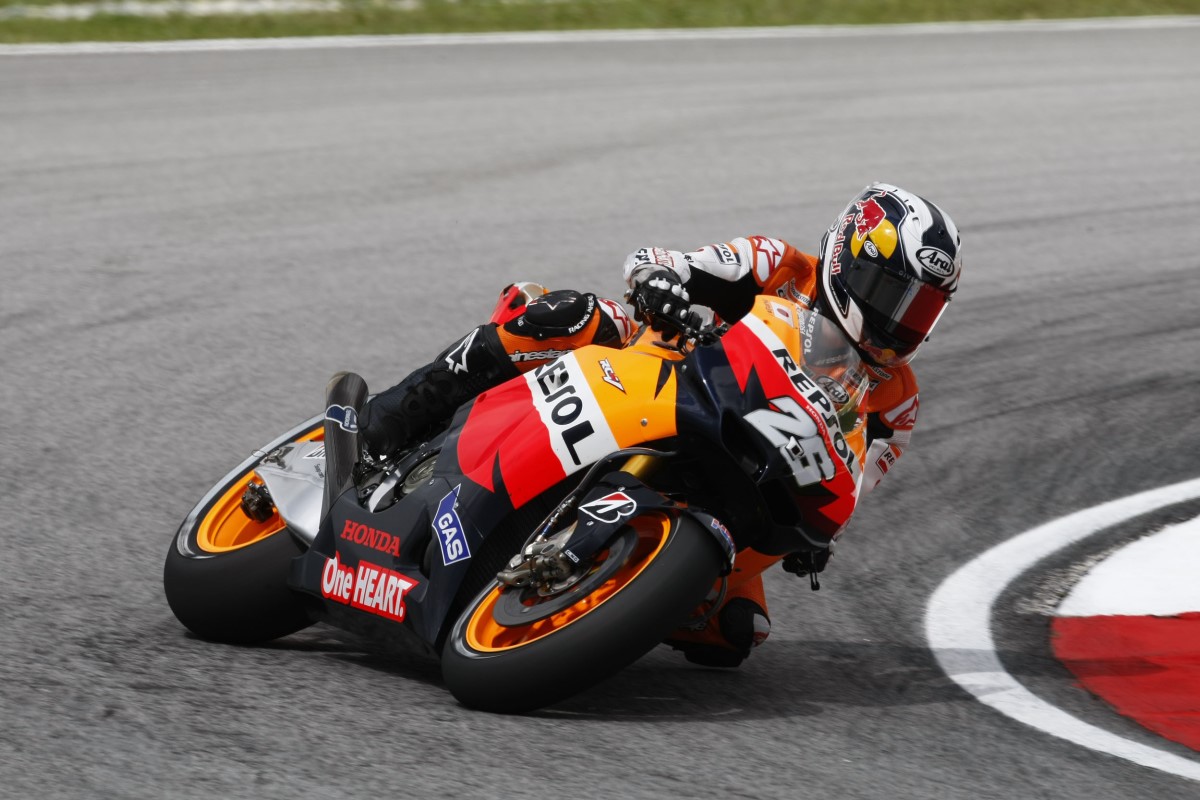 The Repsol Honda Team could not have asked for a better qualifying session in the Malaysian Grand Prix after all three riders took front row spots in a very demanding and intense session.

Dani Pedrosa took his second pole of the season (third one in MotoGP at the Sepang circuit) with 2011 World Champion Casey Stoner in second, just 0.029 off the Spaniard and Andrea Dovizioso in third.

Pedrosa, who has been the fastest all weekend, continued his dominance in qualifying even after crashing at the beginning of the session. The time of 2'01.462 achieved on his 18th lap, put Dani out of reach from Casey (2'01.491) and Andrea (2'01.666), who fought until the last seconds for pole position.

The Repsol Honda Team have achieved double front row places nine times this season, 8 with Stoner and Pedrosa and 1 with Stoner and Dovizioso, but it is the first time this season that the team has occupied the entire front row for qualifying, a feat not matched since the final race of 1997 at Phillip Island when Mick Doohan was on pole with Alex Criville second and Takuma Aoki third. Also in that race, Tadayuki Okada was fourth on the grid making it an all Repsol Honda front row (in 1997 there were four riders on each row of the grid).

All three riders have lapped under the circuit record and have the pace to fight for the victory tomorrow but tire choice and weather conditions will be key factors to consider.

DANI PEDROSA – 1st – 2'01.462
"It was a very difficult session, extremely hot, I couldn't breathe inside the helmet. We had a small crash in the front that I didn't expect, but was able to go back and go faster and take my second pole of the season. I thought I would be able to improve a little more at the end and get closer to the time I did yesterday, but I found some traffic on my final run. Anyway, it's good to be on pole and I hope our race pace can be even better. We have to work on the set up and make a good rear tire choice because our rivals are also very strong. It's going to be very physically demanding for everybody. To have three Repsol Honda riders on the front row is very good, but we cannot forget the other rivals and we must keep focused to finish the weekend in the best way".

CASEY STONER – 2nd – 2'01.491
"I tried to steal pole but it wasn't really our day today. We tried a few different things in set up but we haven't really gone the right direction at all this weekend. In qualifying we tried to find another path to go but we just haven't been able to get grip along with turning, we can find one or the other but at best they are both average so we have some improvement to make for tomorrow. Our race pace isn't too bad, we've looked worse than everyone else because we've been running on the harder tire all weekend but once we put the soft tires on the bike worked a little better".

ANDREA DOVIZIOSO – 3rd – 2'01.666
“I’m really happy with this front row and even more satisfied with my race pace. We have improved a lot, reducing the gap to two tenths after being 1.4 seconds behind in FP2 and 0.8 behind in FP3. We were consistent and fast both with soft and hard tire, meaning that it’s possible to race with both of them. This afternoon the conditions were really demanding, it was very hot and there was no grip but we were able to be consistently fast so we go into the race very strong. With such conditions here it’s impossible to push 100% for 20 laps so it will be very important to make a strategy for the race and to manage the tires. I really like this track and tomorrow it would be fantastic to repeat a Repsol Honda 1, 2, 3 on the Podium, but… in the reverse order!".