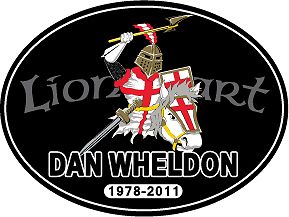 UPDATE NASCAR will provide teams with a B-post decal in honor of Dan Wheldon for all the cars and trucks this weekend in Talladega.

The Lionheart Knight image is one that was included on the back of every one of Dan's helmets. NASCAR also is producing helmet decals for any of the drivers who would like to run a version of the decal on their helmets. The decals will be delivered trackside on Friday. As always, the decals will be provided to the teams during the inspection process throughout the course of the weekend. Additionally, some of the drivers also have their own personal plans to recognize Dan this weekend.
As part of the NASCAR Pre Race run of show, NASCAR will include a moment of silence in Dan's honor prior to the invocations Saturday and Sunday. (They will not be available to the public) NASCAR

10/20/11 A special tribute to fallen IndyCar driver Dan Wheldon will be part of the next Sprint Cup race Sunday at Talladega Superspeedway, according to NASCAR president Mike Helton. Helton said the 15-car crash that killed the 33-year-old Wheldon Sunday touched the NASCAR community and details are being ironed out to decide how best to honor him. "Grant Lynch (Talladega Superspeedway manager) is working on things to be respectful of what happened to Dan," Helton said. "We will remember his wife Susie and their family. As we get closer to Talladega and do what we do we'll have more details." Tennessean

A public memorial service for driver Dan Wheldon will be Sunday at Conseco Fieldhouse in Downtown Indianapolis. The event will be at 4 pm/et Sunday at the home of the Indiana Pacers and Indiana Fever, 125 S. Pennsylvania St. No additional details were provided late Tuesday night in a news release from Amy Konrath, an IndyCar spokeswoman. The event will be carried live on Versus from 4-5 pm.