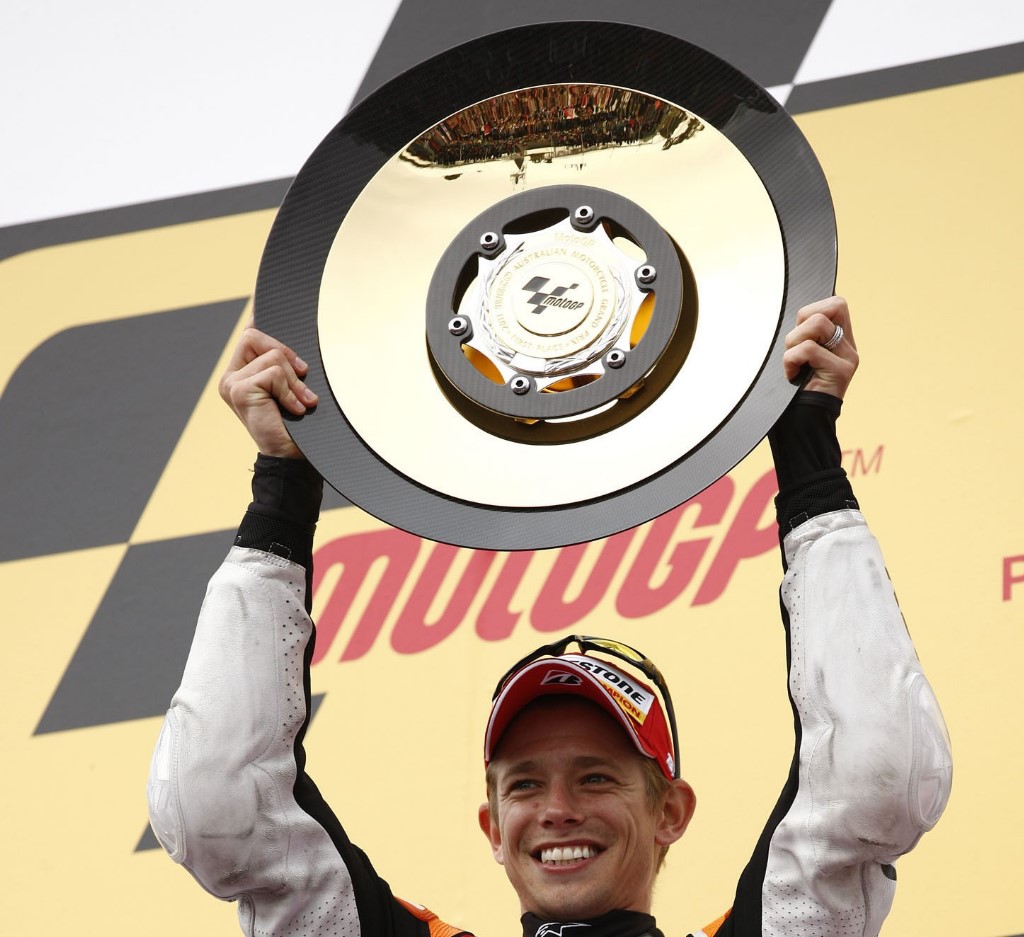 In front of a his home fans at Phillip Island, Casey Stoner rode a flawless race to claim his second MotoGP World Championship title at the Iveco Australian Grand Prix. Simoncelli and Dovizioso joined the newly crowned Champion on the podium. The Australian dominated the weekend for the fifth year running, leading the race from start to finish, giving Honda their first riders title since 2006. The 26 year old took the holeshot from pole position and never looked back as the rest of the field battled for positions.

With a strong breeze blowing and darkening skies, the MotoGP race commenced with a rearranged grid following the withdraw of both Yamaha Factory riders and Héctor Barbera’s replacement rider, Damian Cudlin on the Mapfre Aspar team. Jorge Lorenzo withdrew after a high side in the morning warm up left him with a severely injured finger that will require surgery, while Ben Spies is still mildly concussed after a crash in qualifying on Saturday. Cudlin withdrew due to injuries from a crash in Saturday morning practice.

Nicky Hayden (Ducati Team) and Marco Simoncelli (San Carlo Honda Gresini Team) followed Stoner into turn one, with the Italian making an early move on Hayden to take second. Simoncelli then spent the remainder of the race tussling with Andrea Dovizioso (Repsol Honda), beating his compatriot across the line for his best MotoGP finish of second.

Dani Pedrosa was ten seconds adrift of team mate Dovizioso to finish fourth, giving Honda a 1-4 finish, while Colin Edwards (Monster Yamaha Tech 3) inherited fifth place after first Valentino Rossi (Ducati Team) and then Ã�lvaro Bautista (Rizla Suzuki) crashed out of that position. Rossi fell after making a pass on the Bautista, ending his 13 year string of podium finishes at the Australian circuit, while the Suzuki man slipped toward the end of the race as rain began to fall.

The white flag had been shown on lap ten as scattered rain drops appeared, giving riders the option to swap bikes, though the rain didn’t start in earnest until nearly the end, when it claimed not only Bautista but then Cal Crutchlow (Monster Yamaha Tech 3) and Hiroshi Aoyama (San Carlo Honda Gresini).

Hayden was the first to enter the pits to change bikes, followed by Loris Capirossi (Pramac Racing), though it did not help their finishing positions as Hayden ended the race seventh behind Randy de Puniet (Pramac Racing) despite the Frenchman having had an earlier off-track excursion, while Capirossi finished ninth behind Toni ElÃ­as (LCR Honda).