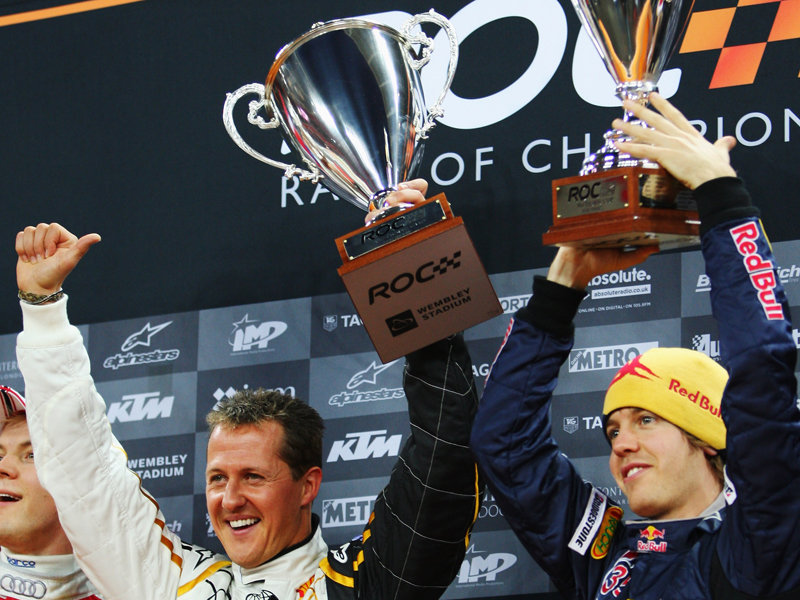 After the 24-year-old German became the youngest back-to-back world champion in the sport's history, Niki Lauda predicted that the record of Vettel's famous countryman could eventually tumble.

"They changed the rules because he (Schumacher) was winning too much," the 1996 world champion told the BBC. "It's much more competitive now than it ever was."

And the jury is out as to whether Vettel is a great, added Hill.

"You'd perhaps like to see him put through a bit of a tougher test of his mettle — a bit of pressure from another team, a contender," he said.

Joining Lauda in his high praise for Vettel, however, is former German driver Hans-Joachim Stuck: "He has the intelligence of a Senna or Prost, the bravado but not the foolhardiness of a Hamilton, and the attention to detail of a Schumacher."

But he told German-language Spox: "I do not think that in the next 15 years someone will be an eight time world champion as the current rules are so different compared to Schumacher's era.

"The teams then had so much more freedom to develop their cars," explained Stuck.

Writing in the Telegraph, Red Bull advisor David Coulthard agrees: "I don't see Red Bull pounding everyone into submission like Ferrari did in the early 2000s. The conditions back then were so different.

"Nowadays there is no in-season testing and everyone uses the same tire supplier. And even if Red Bull could afford to outspend their rivals they are not allowed to," said the former McLaren and Red Bull driver.

"Oh, and if you hadn't noticed, a McLaren car won the (last) race," added Coulthard.

And "Red Bull is already stretched to the limit in the development of this car, and we have already seen McLaren and Ferrari come dangerously close in the course of this year.

"If Newey cannot pull another rabbit from his hat, we can expect an exciting championship in 2012," added the Epsilon Euskadi chief.

Sutil, Heidfeld hope for F1 seats in 2012
(GMM) As Sebastian Vettel drinks in his unprecedented success, two of his German countrymen are hoping simply for a place on the 2012 grid.

Adrian Sutil has been with Force India since the Silverstone based team's Spyker days, but speculation is mounting that Vijay Mallya is planning to pair Paul di Resta with Nico Hulkenberg next year.

"I still have no contract (for 2012)," the German newsmagazine Focus quotes the 28-year-old as saying this week.

"For sure we'll have a meeting soon," Sutil, referring to his boss Mallya, told the BBC last weekend at Suzuka. "I'll ask his opinion about next year and hopefully he'll give me a sign."

Mallya said he will not make a decision until December, but Sutil said the end of the year "is a little late because normally all the other seats are taken".

Already absent from the grid in 2011 is Nick Heidfeld, who recently lost his Renault race seat to Bruno Senna.

Reports have linked the veteran of 183 grands prix with a BMW reunion in the German touring car series for 2012.

"I am in contact with the DTM teams," the 34-year-old confirmed, "but my focus at the moment stays in formula one."

FIA president Jean Todt's new initiative of having a former professional racing driver on the stewards' panel at every grand prix has been widely praised.

But the system may not be perfect, as the last couple of grands prix indicate.

Some observers were amazed that Sebastian Vettel's swerve against Jenson Button at the Suzuka start last weekend was not penalized.

"I am not going to lie. At that moment in time, yes, I felt that it was a little bit more than was needed," said Japanese grand prix winner Button.

Alex Wurz, speaking on Austrian television ORF, said he thinks Vettel was lucky not to have his championship celebrations delayed by a penalty.

"He was lucky that (1980 world champion) Alan Jones was the driver steward, because someone else might have issued a warning or even a stop and go," he said.

"They (the stewards) have penalized people for much less this year and this time they didn't do it," said the Brazilian.

Force India team manager Otmar Szafnauer agrees that consistency is crucial so that drivers know how to behave.

"If something has happened three times before then he knows the way it is and what has to happen," he told Germany's Auto Motor und Sport.

FOTA unity threatened by spending agreement debate
(GMM) The unity of the formula one teams association FOTA might be racing into trouble.

AS newspaper reports that neither Red Bull nor Mercedes are fans of the so-called resource restriction agreement, with Ferrari and McLaren on the opposing side of the developing debate.

The report said Red Bull as well as Mercedes, the topic of conversation at Suzuka following the high-profile appointments of Aldo Costa and Geoff Willis, feel "under suspicion for alleged overspending".

Both teams "seem willing to fight for the elimination of this regulation", with some sources saying an impasse could lead to Mercedes and Red Bull leaving FOTA altogether.

AS correspondent Manuel Franco said Ferrari team boss Stefano Domenicali has called upon FOTA, led by his McLaren counterpart Martin Whitmarsh, to resolve the issue this weekend in Korea.

Bernie Ecclestone admitted recently that he does not support FOTA.

"I try not to think of them," said the F1 chief executive in a joint interview recently with Red Bull team boss Christian Horner, who agreed: "I also don't spend too much time thinking in that direction."

F1 chief executive Ecclestone told formula1.com: "It (FOTA) is an unnecessary association of people who should put their sole emphasis on getting competitive cars on the grid."

Wickens turns sights to 2012 F1 debut
(GMM) A race seat with Virgin could be the next step for Canadian Robert Wickens.

Driving in Virgin and title sponsor Marussia's colors this season, the 22-year-old wrapped up the Renault World Series championship in Spain last weekend while F1 raced at Suzuka.

"We look forward to celebrating with him this weekend in Korea," announced Virgin's F1 team boss John Booth.

A few months ago, Wickens was announced as the F1 team's new reserve driver.

And while the formula one world was in Japan last weekend, the Belgian newspaper De Morgen reported that Wickens is in the running for a 2012 seat because he has "more (sponsorship) money" to offer than Jerome d'Ambrosio.

Wickens told the Toronto newspaper Globe and Mail: "F1 has always been the goal in my whole career and now I am the closest I have ever been.

"Definitely, I will switch now to trying to secure a seat for next year.

"At the end of the day, if I could get corporate Canada's support it would be a dream come true."

Vergne to drive in FP1 in Korea
Jean-Eric Vergne, who last weekend at Barcelona’s Catalunya circuit confirmed his runner-up position in the World Series by Renault Championship, will drive for Scuderia Toro Rosso in the Free Practice 1 session at this weekend’s Korean Grand Prix.

The Frenchman, who has come through the ranks of the Red Bull Junior Driver program, will take over Jaime Alguersuari’s car for the 90 minute session. Jaime sits out the session because the last time a driver was replaced on Friday morning, it was Sebastien Buemi who gave up his seat to Daniel Ricciardo. Vergne will not drive at the Indian Grand Prix, because this is a new circuit and therefore both our race drivers will be given the maximum amount of track time. He will return in Abu Dhabi, replacing Buemi. At the final round of the season in Brazil, whichever of the Toro Rosso drivers has the least points will give up his seat to Vergne for FP1.

With effect from 1 January 2012, the global sport lifestyle brand becomes the team's exclusive licensing partner for footwear, apparel and accessories, and an official Team Partner. The agreement incorporates branding locations for PUMA on the MGP W03, the team's 2012 race car, and on all race and teamwear products.

Through the new partnership, PUMA will develop MERCEDES GP PETRONAS licensed products for global sales and distribution. A strong emphasis will be placed on sales performance of the range in mature motorsport markets, and as the Formula One race calendar continues to expand into new markets, this sales focus will grow globally.

PUMA will also provide the team with its latest innovations in fireproof racewear for the drivers and pit crew. PUMA's development of fire retardant technology has helped revolutionize driver racewear by dramatically reducing weight, while maintaining optimal performance in safety and comfort.

Ross Brawn, Team Principal at MERCEDES GP PETRONAS commented: "PUMA has a long and successful heritage in motorsport and, having worked with them previously in Formula One, I know their technical performance innovations for racewear are amongst the best in the industry, which is of course critical to our racing operation. PUMA's global capability to design, develop and distribute licensed products for fans of the Silver Arrows around the world is equally impressive. This is a key partnership for MERCEDES GP PETRONAS, and one we are delighted to have established."