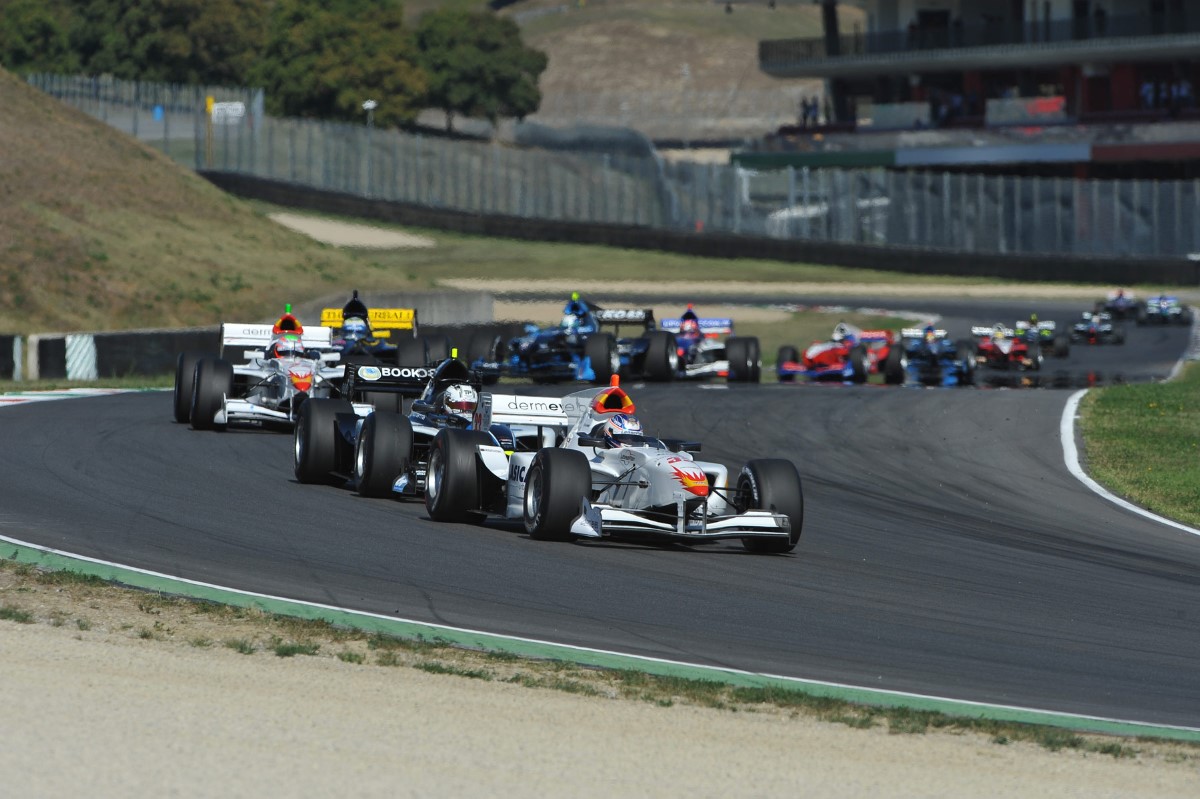 Adrien Tambay won't forget the Mugello weekend easily: the Italian track is proving to be magic for the Frenchman, who first took pole in the morning Qualifying session and then confirmed his performance today with a flag to flag win. Despite this the race was an exciting one right from the start, that actually had to be repeated: that was because at the first try Samuele Buttarelli moved when the red lights were still on, and then stopped just after the line, causing a bit of confusion in the pack.

The Italian driver, who blamed a clutch issue for what happened, had to serve a drive through for that, while the following mess affected Adam Carroll, who stalled his car and had to take the second start from the back of the grid as a consequence. So the pack lined up again on the grid and at the second start there were no issues, with Tambay very quick off the line and keeping the lead. Behind him, Luca Filippi and Fabio Onidi boasted two great starts: the SuperNova driver took P2 after starting from fourth, while Onidi exited the first corner in P3 from third row on the grid.

From then on the highlight of the race was the fight for the lead, with Tambay building a little gap very early in the race and Filippi reducing it before the mandatory pit-stop. The Campos Racing driver entered the pits first, on lap 5, while Luca did his tire change on lap 6 and came out of the pits right on the Frenchman's tail.

Filippi seemed ready for an attack, but Tambay's drive was perfect, never giving his rival a real chance. Behind them Onidi was third, after a race that saw him follow the lead duo closely early on, and then fading a bit after the pit-stop: this allowed Kevin Ceccon to get closer and closer, but Fabio managed the gap quite well and secured the podium finish, benefiting also from a late mistake by his rival at the Bucine corner entry. So, Ceccon finished in P4 but that result was achieved with a good recovery drive, a consequence of a bad start that demoted him to eight place at the beginning of the race.

Anyway the championship leader had a really good pace and this, together with a lightning quick pit-stop by the Ombra Racing staff, allowed him to recover an amazing four places. Thanks to this Ceccon finished ahead of Rio Haryanto and, above all, ahead of title rival Sergei Afanasiev. Fabrizio Crestani took seventh place for Lazarus, ahead of an impressive Adam Carroll: after the start issue, the British driver decided for a late pit-stop strategy together with his team and lapping on a clear track he could make the most of the impressive potential he had already showed in qualifying. With a masterly drive he recovered up to eight place, that means pole for tomorrow's Race 2.

After this race, the title fight is hotter than ever: Filippi reduced his gap from leader Ceccon to 9 points, while Afanasiev lost some ground but is just two points behind Luca. Furthermore, thanks to today's win the crown is still within Tambay's reach, as his gap from the lead is 18 points with 19 still up for grabs.

Adrien Tambay: "It wasn't an easy win, especially from a physical standpoint. In Mugello Auto GP proved to be really tough, and managing my effort was as important as managing the car an the tires. Apart from this the car was really good, but Luca was always very close so I had to keep an eye in the mirror. To be honest I was managing the situation and he never got a real chance, but it wasn't easy anyway. I'm really happy of this win, especially because it comes at the end of the season that for me seemed to be over two months ago. I have to say thanks to Mr. Campos and some other supporters if I'm here, and this is the best way to do that. It's good to know that there is still such good people in motorsport.

Luca Filippi: "Second place is not bad, but as I said my aim for today was winning, in order to reduce the gap as much as possible. I could have done that with a quicker pit-stop but we weren't perfect, so that's it. For the title 9 points from Ceccon is not too much, but it will be difficult considering that he starts ahead and that we realized that overtaking here is not easy".

Fabio Onidi: "I had another great start and basically it's because of that that I got this podium finish. Anyway I'm not satisfied with it because we still have a lot of work to do on the car, that felt really unbalanced after the pit-stop. That's why Ceccon managed to close the gap, and I fear that if it wasn't for his mistake at the end, he would have managed to pass me. Anyway now we have to work, and with another great start we could be on podium again, who knows".