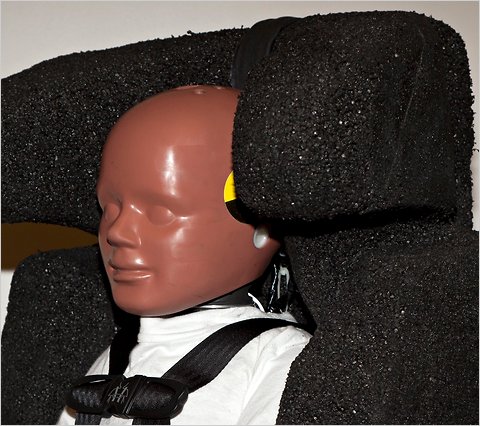 You have to wonder why nobody thought of this before.

Watching IndyCar drivers walk away from 200 m.p.h. crashes, executives at Dorel, the child car seat manufacturer, asked whether the technologies that protected racecar drivers in crashes could be applied to child safety seats.

A collaboration with an IndyCar supplier is bearing out answers. Dorel is developing seats that use a proprietary foam used in IndyCar seats called expanded polypropylene, or E.P.P., which is proven to be more resilient and shock absorbent than other foams.

E.P.P. is one of only two foams approved for use in IndyCar seats, and it is the one that is preferred, said Jeff Horton, director of engineering for the Indy Racing League, the body responsible for safety research. “We promote the E.P.P. 100 percent," he said in a telephone interview. “It’s the best crash absorption we have."

The foam’s function in crashes is twofold. Many foams compress only in the spot where pressure is applied, while others spread the impact but crush down and cannot spring back. E.P.P., developed for seat applications by Bald Spot Sports, the sole manufacturer and supplier of E.P.P. seats to IndyCar, spreads impact throughout the foam, so pressure in a single spot is absorbed in the neighboring foam as well.

“We tested probably 30 types of material, and when we got down to the type of material, we tested different density," said Travis Cobb, a partner in Bald Spot Sports. “We crashed a lot of cars."

The E.P.P. also provides a bonus for fatigued parents. Because E.P.P. does not require a resin glue to lock the foam molecules in place, the foam weighs less than other varieties, said Mr. Horton, who has been privy to the development of the Dorel prototypes. “I’ve seen the baby seats, and they are very light," he said.

Dorel was in the news more recently for a recall of 800,000 child seats for a condition where the harnesses may loosen. No injuries have been attributed to the harness issue. The National Highway Traffic Safety Administration, which prompted the recall, said at the time, “Dorel doesn’t have a disproportionate number of recalls."

The E.P.P. seats are still in development and will become available in 2012, said Barry Mahal, the executive vice president of child restraint systems for the Dorel Juvenile Group. NY Times