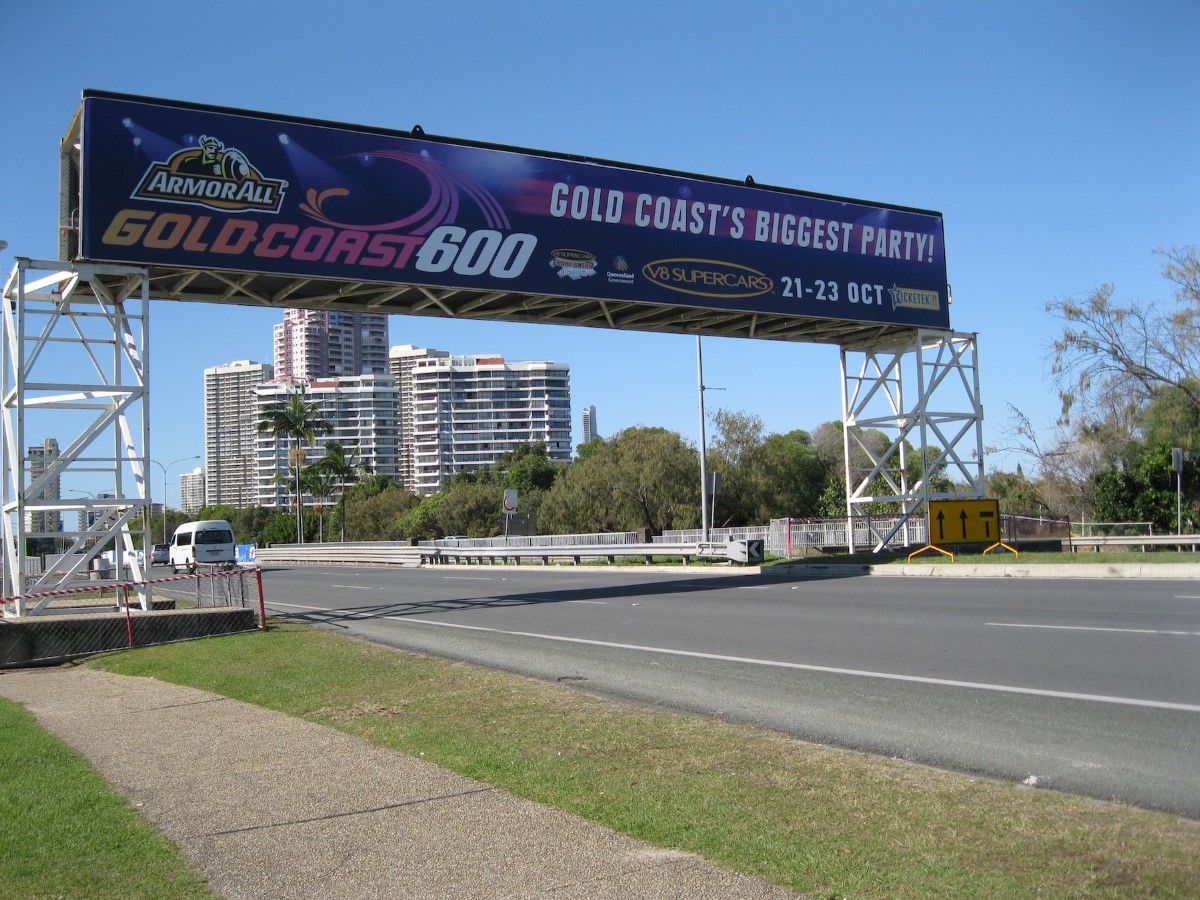 The mammoth task of constructing the 2.96km Surfers Paradise street circuit for the Armor All Gold Coast 600 – October 21-23 – is well and truly underway, with the first spectator bridge being put into place overnight.

"The first spectator bridge being installed really signifies the event is coming closer," said Reeves. "It is an exciting time to see this precinct grow from being a public road into one of the world's most iconic street circuits.

"The team will be working around the clock to get everything ready for our 28 Champion drivers that will be coming from all corners of the globe.

"This year, having the race beamed live into North America on SPEED Channel is going to open up Queensland, the Gold Coast and V8 Supercars to an audience that may never have seen what we have to offer.

"The Gold Coast 600 and this television deal positions Queensland as the events state and I expect we’ll have an influx of visitors when they see the V8 Supercars racing wheel to wheel mere meters from the Gold Coast's immaculate beaches.

"When you combine the 28 Champions that we’ll see racing around here in a few weeks time and our V8 Supercar legends with the recent performances of Gold Coast sporting stars Sally Pearson and Sam Stosur – it shows that Queensland really is the Champions State and the Events State."

Logistically – the Gold Coast street circuit is considered one of the most difficult street circuits in the world to construct – organizers have streamlined the build and dismantle process to no longer than six weeks. This has been aided by the 40% reduction in the circuit’s footprint for the re-born Armor All Gold Coast 600.

"We have approximately 6,000 residents within the precinct of the circuit as well as many thousands more that use the roads on a daily basis," said V8 Supercars Acting CEO, Shane Howard.

"Last year’s reduction of the circuit to the shorter 2.96km layout resulted in much less disruption, a speedier circuit build and delivered on providing better race action for our spectators."

Howard also mentioned that accreditation for residents was now open.

"We encourage local residents to lodge their application for accreditation sooner rather than later, it will close on September 30. Pleasingly, our numbers show that more than 50% have done this so far."

The Armor All Gold Coast 600 plays host not only to 28 Champions of motor racing from 12 countries, but Australia's V8 Supercar stars – who will be fresh from the V8 Supercars major races – the L&H 500 at Phillip Island this weekend and the iconic Supercheap Auto Bathurst 1000.

The event holds something for everyone – with the nightly 600 Sounds concert series, headlined by Bliss N Eso (Friday) and Simple Minds (Saturday).

The event caters for those of all ages with the Dreamworld Family Zone and the Disney.Pixar Cars 2 Mack the Truck Tour forming a feature part of the off-track entertainment at the Armor All Gold Coast 600.

Tickets are available through ticketek.com or by calling 132 849. Tickets for the three days of the event (October 21-23) including entry to the 600 Sounds Concerts, presented by Sea FM start at $136.